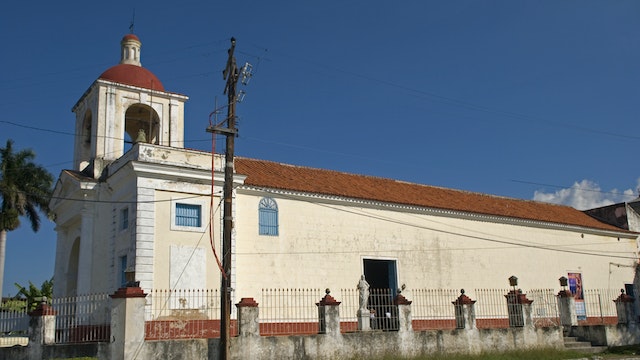 As important as it is diminutive, Iglesia de Nuestra Señora de Regla, which sits close to the dock in Regla, has a long and colorful history. Inside on the main altar you'll find La Santísima Virgen de Regla.

The Virgin, represented by a black Madonna, is venerated in the Catholic faith and associated in the Santería religion with Yemayá, the orisha of the ocean and the patron of sailors (and always represented in blue). Legend claims that this image was carved by St Augustine 'The African' in the 5th century, and that in 453 a disciple brought the statue to Spain to safeguard it from barbarians. The small vessel in which the image was traveling survived a storm in the Strait of Gibraltar, so the figure was recognized as the patron of sailors. In more recent times, rafters attempting to reach the US have evoked the protection of the Black Virgin.

To shelter a copy of the image, a hut was first built on this site in 1687 by a pilgrim named Manuel Antonio. This structure was destroyed in a 1692 hurricane. A few years later a Spaniard named Juan de Conyedo built a stronger chapel, and in 1714 Nuestra Señora de Regla was proclaimed patron of the Bahía de la Habana. In 1957 the image was crowned by the Cuban Cardinal in Havana cathedral. Every year on September 7 thousands of pilgrims descend on Regla to celebrate the saint's day, and the image is taken out for a procession through the streets.

The current church dates from the early 19th century and is always busy with devotees from both religions stooping in silent prayer before the images of the saints that fill the alcoves. In Havana there is probably no better (public) place to see the layering and transference between Catholic beliefs and African traditions.