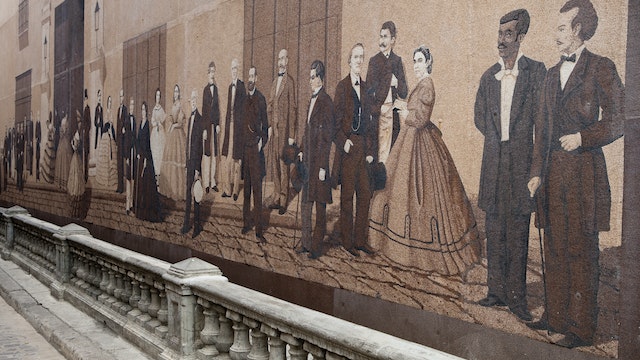 Cobbled, car-free Calle Mercaderes (Merchant's Street) has been extensively restored by the Office of the City Historian and is an almost complete replica of itself at its splendid 18th-century high-water mark. Interspersed with the museums, shops and restaurants are some working social projects, such as a maternity home and a paper-making cooperative.

Most of the myriad museums are free, including the Casa de Asia, with paintings and sculpture from China and Japan; the Armería 9 de Abril, an old gun shop (now museum) stormed by revolutionaries on the said date in 1958; and the Museo de Bomberos, which has antediluvian fire equipment dedicated to 19 Havana firefighters who lost their lives in an 1890 railway blaze.

Just off Mercaderes down Obrapía, it's worth slinking into the gratis Casa de África, which houses sacred objects relating to Santería and the secret Abakuá fraternity collected by ethnographer Fernando Ortíz.

The corner of Mercaderes and Obrapía has an international flavor, with a bronze statue of Latin America liberator Simón Bolívar; across the street you'll find the Museo de Simón Bolívar, dedicated to Bolívar's life. The Casa de México Benito Juárez exhibits Mexican folk art and plenty of books but not a lot on Juárez (Mexico's first indigenous president) himself. Just east is the Casa Oswaldo Guayasamín, now a museum but once the studio of the great Ecuadorian artist who painted Fidel Castro in numerous poses.

Mercaderes is also characterized by its restored shops, including a perfume store and a spice shop. Wander at will.