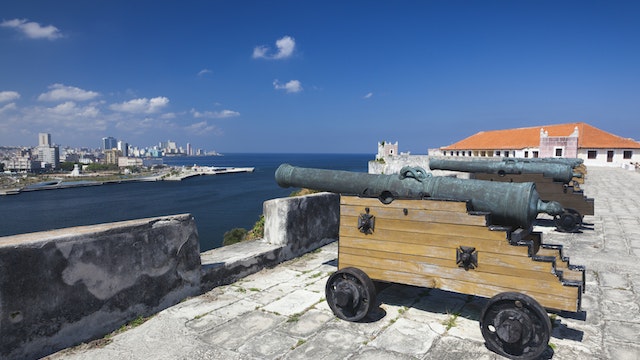 This 18th-century colossus was built between 1763 and 1774 on a long, exposed ridge on the east side of Havana harbor to fill a weakness in the city's defenses. In 1762 the British had taken Havana by gaining control of this strategically important ridge, and it was from here that they shelled the city mercilessly into submission. In order to prevent a repeat performance, Spanish king Carlos III ordered the construction of a massive fort that would repel future invaders.

Measuring 700m from end to end and covering a whopping 10 hectares, it is the largest Spanish colonial fortress in the Americas. The impregnability of the fort meant that no invader ever stormed it, though during the 19th century Cuban patriots faced firing squads here. Dictators Gerardo Machado and Fulgencio Batista used the fortress as a military prison, and immediately after the revolution Che Guevara set up his headquarters inside the ramparts to preside over another catalog of grisly executions (this time of Batista's officers).

These days the fort has been restored for visitors, and you can spend at least half a day checking out its wealth of attractions. As well as bars, restaurants, souvenir stalls and a cigar shop (containing the world's longest cigar), La Cabaña hosts the Museo de Fortificaciones y Armas and the engrossing Museo de Comandancia del Che. The nightly 9pm cañonazo ceremony is a popular evening excursion in which actors dressed in full 18th-century military regalia reenact the firing of a cannon over the harbor. You can visit the ceremony independently or as part of an excursion.