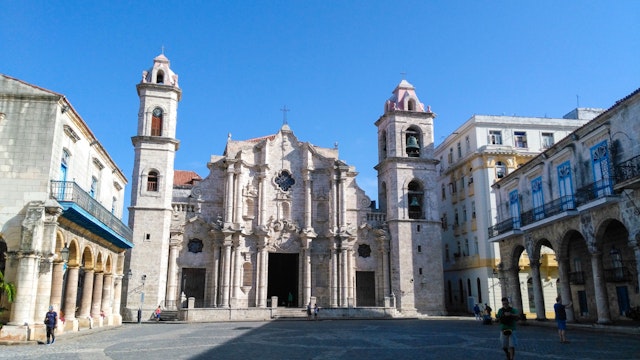 Habana Vieja's most uniform square is a museum to Cuban baroque, with all the surrounding buildings, including the city's beguiling asymmetrical cathedral, dating from the 1700s. Despite this homogeneity, it is actually the newest of the four squares in the Old Town, with its present layout dating from the 18th century.

On the square's eastern side, the Casa del Lombillo was built in 1741 and once served as a post office (a stone-mask ornamental mailbox built into the wall is still in use). Since 2000 it has functioned as an office for the City Historian. On the western side is the majestic Palacio de los Marqueses de Aguas Claras, completed in 1760 and widely lauded for the beauty of its shady Andalusian patio. Today it houses the Restaurante Paris. The south side is taken up by the resplendent Palacio de los Condes de Casa Bayona, built in 1720, which today hosts the Museo de Arte Colonial.