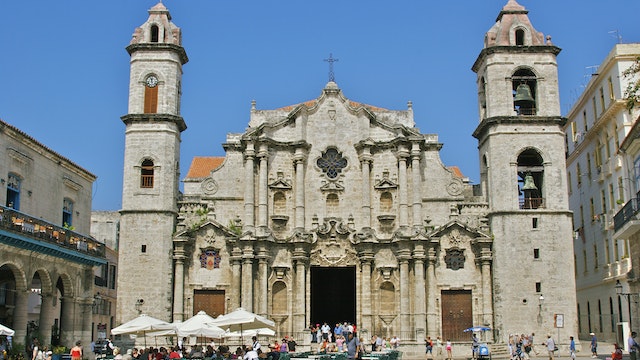 Described by novelist Alejo Carpentier as 'music set in stone,' Havana's incredible cathedral, dominated by two unequal towers and framed by a theatrical baroque facade, was designed by Italian architect Francesco Borromini. Construction of the church was begun by Jesuits in 1748 and work continued despite their expulsion in 1767. When the building was finished in 1787, the diocese of Havana was created and the church became a cathedral – it's one of the oldest in the Americas.

The remains of Christopher Columbus were brought here from Santo Domingo in 1795 and interred until 1898, when they were moved to Seville Cathedral in Spain.

A curiosity of the cathedral is its interior, which is neoclassical rather than baroque and relatively austere. Frescoes above the altar date from the late 1700s, but the paintings that adorn the side walls are copies of originals by Bartolomé Esteban Murillo and Peter Paul Rubens. You can climb the smaller of the towers for CUC$1.