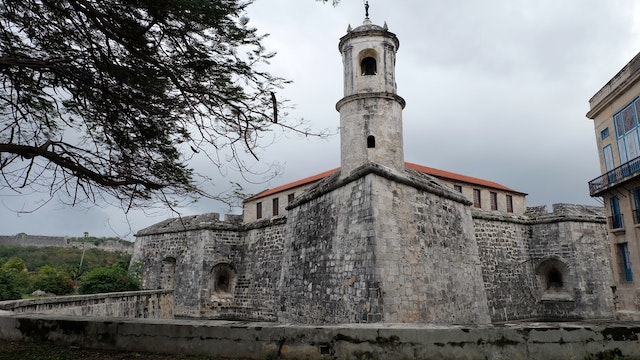 On the seaward side of Plaza de Armas is one of the oldest existing forts in the Americas, built between 1558 and 1577 on the site of an earlier fort destroyed by French privateers in 1555. The imposing castle is ringed by an impressive moat and shelters the Museo de Navegación, which covers the history of the fort and Old Town, and its connections with the Spanish empire. Look out for the huge scale model of the Santíssima Trinidad galleon.

The west tower is crowned by a copy of a famous bronze weather vane called La Giraldilla. The original was cast in Havana in 1632 by Jerónimo Martínez Pinzón and is popularly believed to be of Doña Inés de Bobadilla, the wife of gold explorer Hernando de Soto. The original is now kept in the Museo de la Ciudad, and the figure also appears on the Havana Club rum label.