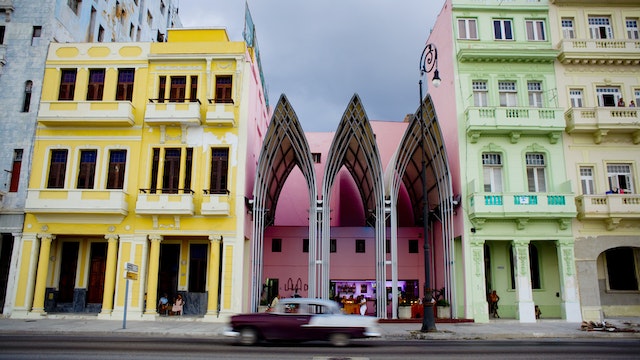 The Malecón, Havana's evocative 7km-long sea drive, is one of the city's most soulful and quintessentially Cuban thoroughfares, and long a favored meeting place for assorted lovers, philosophers, poets, traveling minstrels, fishers and wistful Florida-gazers. The Malecón's atmosphere is most potent at sunset, when the weak yellow light from creamy Vedado filters like a dim torch onto the buildings of Centro Habana, lending their dilapidated facades a distinctly romantic quality.

Laid out in the early 1900s as a salubrious oceanside boulevard for Havana's pleasure-seeking middle classes, the Malecón expanded rapidly eastward in the century's first decade, with a mishmash of architecture that mixed sturdy neoclassicism with whimsical art nouveau. By the 1920s the road had reached the outer limits of Vedado, and by the early 1950s it had metamorphosed into a busy six-lane highway that carried streams of wave-dodging Buicks and Chevrolets from the gray hulk of the Castillo de San Salvador de la Punta to the borders of Miramar. Today the Malecón remains Havana's most authentic open-air theater, sometimes dubbed 'the world's longest sofa,' where the whole city comes to meet, greet, date and debate.

Fighting an ongoing battle with the corrosive effects of the ocean, many of the thoroughfare's magnificent buildings now face decrepitude, demolition or irrevocable damage. To combat the problem, 14 blocks of the Malecón have been given special status by the Office of the City Historian in an attempt to stop the rot.

The Malecón is particularly evocative when a cold front blows in and massive waves crash over the sea wall. The road is often closed to cars at these times, meaning you can walk right down the middle of the empty thoroughfare (and get very wet).