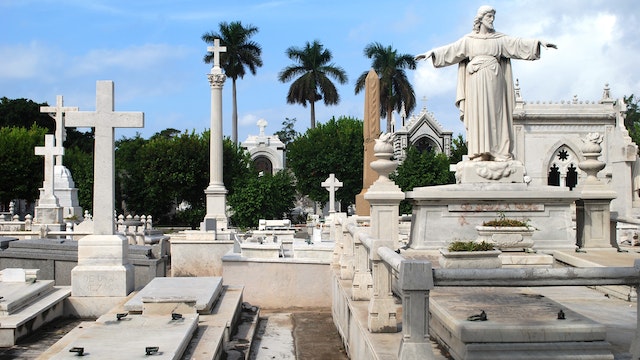 Havana's main cemetery (a national monument), one of the largest in the Americas, is renowned for its striking religious iconography and elaborate marble statues. Far from being eerie, a walk through these 57 hallowed hectares can be an educational and emotional stroll through the annals of Cuban history. A map (CUC$1) showing the graves of assorted artists, sportspeople, politicians, writers, scientists and revolutionaries is for sale at the entrance.

Enter via the splendid Byzantine-Romanesque gateway, the Puerta de la Paz; the tomb of independence leader General Máximo Gómez (1905) is on the right (look for the bronze face in a circular medallion). Further along past the first circle, and also on the right, are the firefighters monument (1890) and the neo-Romanesque Capilla Central (1886), in the center of the cemetery. Just northeast of the chapel is the graveyard's most celebrated (and visited) tomb, that of Señora Amelia Goyri, better known as La Milagrosa (the Miraculous One), who died while giving birth on May 3, 1901. The marble figure of a woman with a large cross and a baby in her arms is easy to find due to the many flowers piled on the tomb and the local devotees in attendance. For many years after her death her heartbroken husband visited the grave several times a day. He always knocked with one of four iron rings on the burial vault and walked away backwards so that he could see her for as long as possible. When the bodies were exhumed some years later, Amelia's body was uncorrupted (a sign of sanctity in the Catholic faith), and the baby, who had been buried at its mother's feet, was allegedly found in her arms. As a result, La Milagrosa became the focus of a huge spiritual cult in Cuba, and thousands of people come here annually with gifts, in the hope of fulfilling dreams or solving problems. In keeping with tradition, pilgrims knock with the iron ring on the vault and walk away backwards when they leave.

As important as La Milagrosa among the Santería community, the 'tomb of Hermano José' marks the grave of a woman called Leocadia Pérez Herrero, a black Havana medium known for her great acts of charity among the poor in the early 20th century. Leocadia said that she consulted with a Santería priest called Hermano José who encouraged and guided her in her generous acts. As a spiritual and superstitious person, she always kept a painting of Hermano José's image in her house, and when she died in 1962 the canvas was buried alongside her. Today followers of Santería venerate Hermano José and regularly come to Leocadia's grave to ask for charitable favors. In keeping with Santería tradition, they often leave flowers, glasses of rum, half-smoked cigars or sacrificed chickens on the grave.

Also worth looking out for are the graves of novelist Alejo Carpentier (1904–80), scientist Carlos Finlay (1833–1915), the Martyrs of Granma and the Veterans of the Independence Wars.