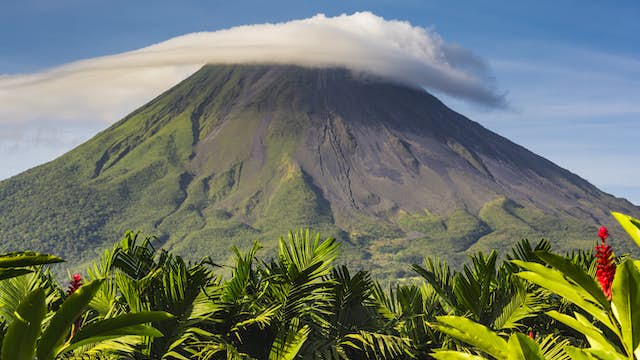 From 1968 until 2010, Volcán Arenal was an ever-active and awe-striking natural wonder, producing menacing ash columns, massive explosions and streams of glowing molten rock almost daily. While the fiery night views are gone for now, this mighty mountain is still a worthy destination. Part of the Area de Conservación Arenal, the park is rugged and varied, with about 15km of well-marked trails that follow old lava flows. Hikers routinely spot sloths, coatis, howler monkeys, white-faced capuchins and even anteaters.

Parque Nacional Volcán Arenal is approximately 17km west of La Fortuna. The main park entrance is on the road to El Castillo (turn off the main road 13km west of town). It’s easiest to reach the park by car or on a tour. Otherwise take any bus to Tilarán and ask the driver to let you off at the turnoff.

In 2017 a new 'sector peninsula' set of trails opened, comprising 1.2km of trails, an observation tower and scenic lake overlook. Although the last entrance to the national park is at 2:30pm, you may be allowed to enter and stay at the new sector later.