Cathedral of Our Saviour 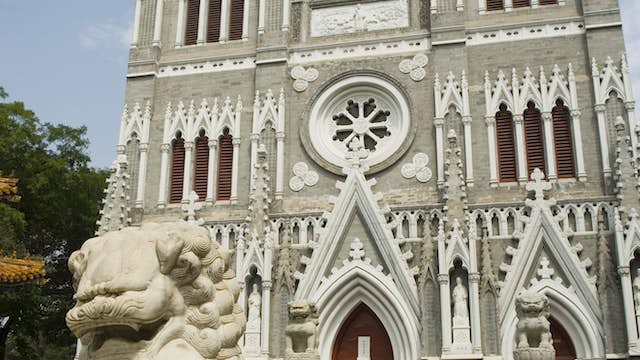 Formerly known as Beitang, this gothic church (c 1897) is Beijing's most exemplary, with a pair of 31m-high bell towers looking resplendent (read: gaudy) after a 2018 paint job. The churchyard, where hawkers sell cherubic portraits of Jesus, has several notable Chinese-style buildings providing contrast to the European architecture. Notoriously, Beitang was the site of a bloody siege during the Boxer Uprising in 1900, costing the lives of around 400 churchgoers. A tiny memorial stone in the east chapel records the dates.

Inscribed on the stone is 'Gesta Dei Per Francos', an oblique reference to the First Crusade (the Boxer Rebellion was an uprising against the spread of foreign ideas in China, especially Christianity). Beneath is recorded the dates of the siege, from 13 June to 16 August 1900. During this time, something like 10,000 Boxers surrounded the church, protected by just 41 French and Italian marines. By digging tunnels and planting improvised mines, the Boxers killed hundreds inside the church, with many also dying of disease and starvation, but remarkably it was never taken. The number of Boxers killed is unrecorded, but was undoubtedly high (they believed they were impervious to bullets). The siege was eventually relieved by the arrival of Allied soldiers.

During the Cultural Revolution, the cathedral served as a factory warehouse, and later as a school in the 1970s. It was reopened as a Catholic church in 1985. Mass here is well attended by locals as well as foreigners; the 2pm Sunday service is conducted in English and French. Time your visit with a service to get a peek inside the church to see the stained glass and the French-made organ.

The old convent, marked by red communist stars (tacked on decades later), is a short walk to the southwest. You can only view it from the outside.