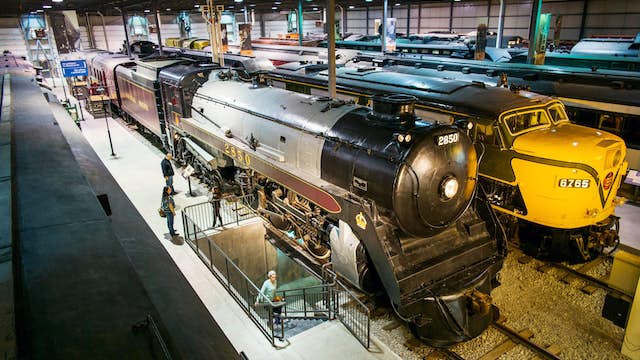 The Canadian Railway Museum contains more than 150 historic vehicles, ranging from locomotives, steam engines, Old Montréal streetcars and passenger cars to snow plows. It’s widely acknowledged as one of North America’s most outstanding collections. Not particularly well known by Montréalers, this museum gets raves from those who make the trek, especially families, and many claim it’s the best museum in the Montréal area.

The aerodynamic steam engine Dominion of Canada broke the world speed record in 1939 by clocking over 200km/h. A special sight is Montréal’s famous Golden Chariot, an open-air streetcar with tiers of ornate seats and gilt ironwork. Another good exhibit is the school car, a Canadian invention that served the railway towns of northern Ontario: two cars of each teaching train had a kitchen, living area and classroom with 15 desks.

There always seems to be something special going on here, whether it’s the miniature railway or streetcar rides, weather permitting.

By car, take the Pont Champlain from Montréal to Autoroute 15, then Hwy 132 at the Châteauguay cutoff to Rte 209. It’s a 20-minute drive.