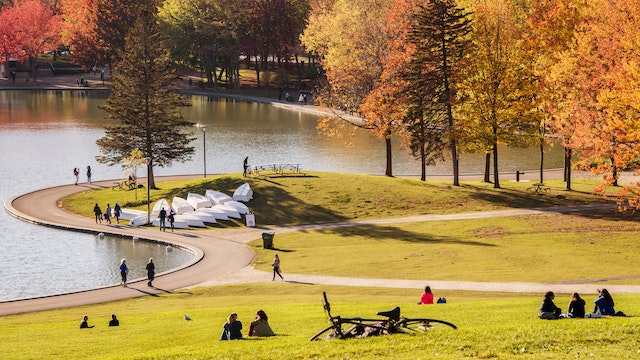 The charming, leafy expanse of Parc du Mont-Royal is charged for a wide range of outdoor activities. The wooded slopes and grassy meadows have stunning views that make it all the more popular for jogging, picnicking, horseback riding, cycling and throwing Frisbees. Winter brings skating, tobogganing and cross-country skiing.

Montréalers are proud of their "mountain," so don’t call it a hill as Oscar Wilde did when he visited the city in the 1880s. The park was laid out by Frederick Law Olmsted, the architect of New York’s Central Park. The idea came from bourgeois residents in the adjacent Golden Square Mile who fretted about vanishing greenery.

Contrary to what people may try to tell you, this place is not an extinct volcano. Rather, Parc du Mont-Royal is a hangover from when magma penetrated the earth’s crust millions of years ago. This formed a sort of erosion-proof rock, so while time and the elements were wearing down the ground around it, the 761ft-high (232m) hunk of rock stood firm.

Parc du Mont-Royal has some fantastic bird-watching opportunities, particularly in spring. A great number of migratory birds use the area as a passage on their way to breeding grounds. In both the park and in nearby Cimetière Mont-Royal, look out for screech owls, red-shouldered hawks, northern orioles, rose-breasted grosbeaks, bluebirds, olive-sided flycatchers, indigo buntings and many more species. In winter hardy bird-lovers come out for walks along the bird-feeder circuit that goes around the Summit Loop (the park places feeders out from November to April).  Contact Les Amis de la Montagne, located at Maison Smith, for information on guided walks.

Head to Belvédère Kondiaronk at Chalet du Mont-Royal and Belvédère Camillien-Houde lookout for astonishing views of Montréal and surrounding landscapes.

On the north side of the park lie two enormous cemeteries: Cimetière Mont-Royal is Protestant and nondenominational, while Cimetière Notre-Dame-des-Neiges is Catholic. The latter has several interesting mausoleums. The Pietà Mausoleum contains a full-scale marble replica of Michelangelo’s famous sculpture in St Peter’s Basilica in Rome. Other mausoleums in the cemetery emit solemn music, including that of Marguerite Bourgeoys, a nun and teacher who was beatified in 1982 – for more details on her life, visit the Chapelle Notre-Dame-de-Bonsecours. Built in 2007, the Esther Blondin Mausoleum is a modern facility housing 6000 crypts and niches, reflecting the increasing popularity of communal memorial spaces.

Walkers will find main entry points on Rue Drummond and Peel in downtown and Rue Rachel in the Plateau. Alternatively, take bus 11 from Mont-Royal metro. There are two parking lots in the park.