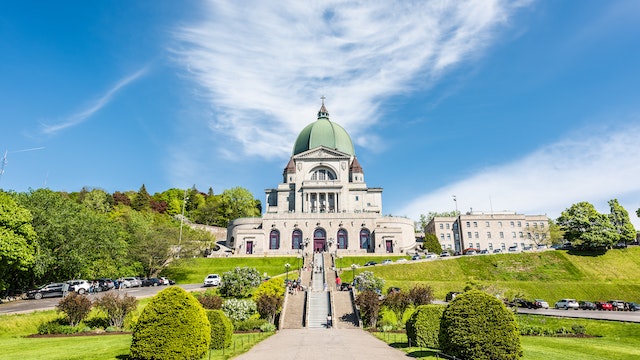 The stunning Oratoire St-Joseph church built on the flanks of Mont-Royal commands grand views of the the Côte-des-Neiges area and northwest Montréal. The majestic basilica is a tribute to mid-20th-century design as well as an intimate shrine to Brother André, a local saint said to have healed countless people.

The largest shrine ever built in honor of St Joseph, this Renaissance-style building was completed in 1960 and commands fine views of the northern slope of Mont-Royal. The oratory dome is visible from anywhere in this part of town.

The oratory is also a tribute to the work of Brother André (1845–1937), the determined monk who first built a little chapel here in 1904. Brother André was said to have healing powers – as word spread, a larger shrine was needed, so the church began gathering funds to build one. Rows of discarded crutches and walking sticks in the basement Votive Chapel testify to this belief and the shrine is warmed by hundreds of candles. When Brother André died at age 91, a million devotees filed past his coffin over the course of six days. His black granite tomb in the Votive Chapel was donated by Québec premier Maurice Duplessis. Brother André was beatified in 1982 and finally canonized in 2010. His heart is on display too, in an upstairs museum dedicated to him.

How much is a holy man’s heart worth? Fifty-thousand dollars, according to thieves who broke into a locked room in the Oratoire St-Joseph in March 1973. They made off with Brother André’s heart sealed in a vial and demanded the sum in a ransom note that scandalized Montréal. The purloined organ was the subject of tabloid articles, musical compositions and even an art exhibition. Church officials reportedly refused the ransom demand, and nothing more was seen of the heart until December 1974 when Montréal lawyer to the underworld, Frank Shoofey, received a mysterious phone call asking him if he wanted to know its whereabouts. Shoofey was directed to an apartment building storage locker that contained a box, and inside was the vial housing Brother André’s heart. The thieves were never found, and today the heart is secure in the Oratoire behind a metal grille and a sturdy transparent display case. But some believe the Church actually did pay the ransom to get it back. Was Shoofey, who was shot dead in 1985 in a still-unsolved murder, a go-between? Whatever the case, Montréal’s great heart heist has continued to inspire artists long after the saint himself died.

Tours are currently suspended and the Oratory Museum remains closed until further notice.

The Oratoire is served by bus route 51, and Snowdon and Côte-des-Neiges Stations. Religious pilgrims might climb the 300 wooden steps to the oratory on their knees, praying at every step; other visitors take the stone stairs or one of the free shuttle buses from the base parking lot.