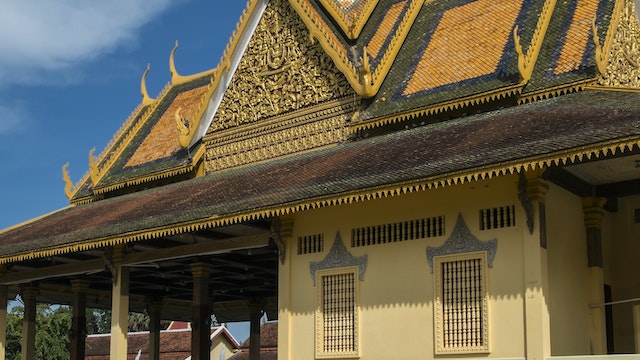 With its classic Khmer roofs and ornate gilding, the Royal Palace once dominated the skyline of Phnom Penh. It's a striking structure near the riverfront, bearing a remarkable likeness to its counterpart in Bangkok. Being the official residence of King Sihamoni, parts of the massive palace compound are closed to the public. The adjacent Silver Pagoda is open to visitors.

Tourists are allowed to visit only the Throne Hall and a clutch of buildings surrounding it. All visitors need to wear shorts that reach to the knees, and a T-shirt or blouse that reaches to the elbows; otherwise you will have to buy an appropriate sarong as a covering at the ticket booth. The palace gets very busy on Sundays, when countryside Khmers come to pay their respects, but being among crowds of locals can be a fun way to experience the place.

Visitors enter into the eastern portion of the palace compound, not far from the Chan Chaya Pavilion. Performances of classical Cambodian dance were once staged in this pavilion, which is still sometimes lit up at night to commemorate festivals or anniversaries.

The main attraction in the palace compound is the Throne Hall, topped by a 59m-high tower inspired by the Bayon at Angkor. The hall is used for coronations and ceremonies such as the presentation of credentials by diplomats. Many of the items once displayed here were destroyed by the Khmer Rouge.

South of the Throne Hall, check out the curious iron Napoleon III Pavilion. Given to King Norodom by Napoleon III of France, it was hardly designed with the Cambodian climate in mind. In fact, it was originally built for the inauguration of the Suez Canal in 1869, before being shipped to Cambodia in pieces.