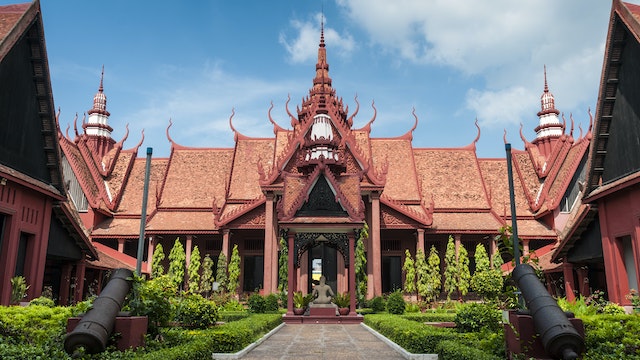 The National Museum of Cambodia is home to the world’s finest collection of Khmer sculpture: a millennium’s worth and more of masterful Khmer design. It's housed in a graceful terracotta structure of traditional design (built from 1917 to 1920) with an inviting courtyard garden, just north of the Royal Palace.

Most visitors start left and continue in a clockwise, chronological direction. One of the first significant sculptures to greet visitors is a large fragment – including the relatively intact head, shoulders and two arms – of an immense bronze reclining Vishnu statue, which was recovered from the Western Mebon temple near Angkor Wat in 1936. Continue into the southern pavilion, where the pre-Angkorian collection begins, illustrating the journey from the human form of Indian sculpture to the more divine form of Khmer sculpture from the 5th to 8th centuries. Highlights include an imposing, eight-armed Vishnu statue from the 6th century, found at Phnom Da, and a staring Harihara, combining the attributes of Shiva and Vishnu, from Prasat Andet in Kompong Thom Province. The Angkor collection includes several striking statues of Shiva from the 9th, 10th and 11th centuries; a giant pair of wrestling monkeys (Koh Ker, 10th century); a beautiful 12th-century stele (stone) from Oddar Meanchey Province inscribed with scenes from the life of Shiva; and the sublime statue of a seated Jayavarman VII (r 1181–1219), his head bowed slightly in a meditative pose (Angkor Thom, late 12th century).

Note that visitors are not allowed to photograph the collection, only the central courtyard. English-, French-, Spanish- and Japanese-speaking guides are available for tours (US$6). A comprehensive booklet, The New Guide to the National Museum (US$15), is available at the front desk, while the smaller Khmer Art in Stone (US$2) covers some signature pieces. There are also audio guides available in eight languages (US$5).