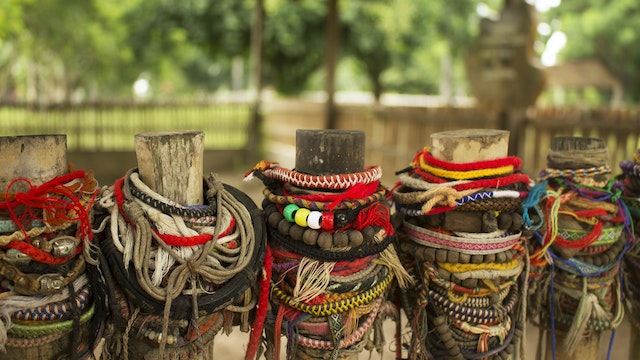 Between 1975 and 1978, about 20,000 men, women, children and infants who had been detained and tortured at S-21 prison were transported to the extermination camp of Choeung Ek. It is a peaceful place today, where visitors can learn of the horrors that unfolded here decades ago. Admission includes an excellent audio tour, available in several languages.

The remains of 8985 people, many of whom were bound and blindfolded, were exhumed in 1980 from mass graves in this one-time longan orchard; 43 of the 129 communal graves here have been left untouched. Fragments of human bone and bits of cloth are scattered around the disinterred pits. More than 8000 skulls, arranged by sex and age, are visible behind the clear glass panels of the Memorial Stupa, which was erected in 1988.

The audio tour includes stories by those who survived the Khmer Rouge, plus a chilling account by Him Huy, a Choeung Ek guard and executioner, about some of the techniques they used to kill innocent and defenceless prisoners, including women and children. There's also a museum here with some interesting information on the Khmer Rouge leadership and the ongoing trial. A memorial ceremony is held annually at Choeung Ek on 20 May.

The site is well signposted in English about 7.5km south of the city limits. Figure on about US$10 for a remork-moto (drivers may ask for more) for a half-day. A shuttle-bus tour is available with Phnom Penh Hop On Hop Off, which includes hotel pickup from 8am in the morning or 1.30pm in the afternoon.