Fans of the acclaimed Japanese artist Yayoi Kusama can see her work at exhibits currently on display around the world, and now even in a new wax figure at Madame Tussauds in Hong Kong in a zone covered in the her characteristic polka dots.

The wax figure of the 87-year-old Kusama, one of the world’s most famous contemporary artists, along with an entire themed area for the artist's replica, is the only one outside of Tokyo. It draws on Kusama's iconic polka dots and gourd motifs and the artist’s concept of “self-obliteration”.

The room features parallel mirrors, along with dramatic lighting effects, and a highly lifelike wax figure of Kusama. The artist noted in a statement about the new room that she hopes that people who pass through Hong Kong's Madame Tussauds “can fully embrace the positive energy evoked by the zone”.

And while getting up close to a wax figure might be fun, fans of the artist and her large-scale installations who want to delve deeper can currently catch a glimpse of her works around the world.

An exhibition at the Helsinki Art Museum in Finland, titled In Infinity, covers the prolific artist’s career from the 1950s to the present. With more than 200 works, it is a survey of Kusama’s artistic output, which includes her well-known works that incorporate dots, gourds, colours and reflections. It also expands into her fashion and design efforts, and contains an interactive exhibit that allows visitors to fill “The Obliteration Room” with colourful stickers. The exhibition is on until 22 January, 2017.

In the UAE, the Sharjah Art Foundation is holding an exhibition on the artist that runs until 9 January, focused on her works that use repetitive patterns and polka dots. It will also feature “The Obliteration Room”, in which people can leave their marks on the walls.

In North America, the Hirshhorn Museum and Sculpture Garden in Washington DC also announced that it is organising “Yayoi Kusama: Infinity Mirrors,” which it states is the first institutional survey exhibition to explore the evolution of the celebrated Japanese artist’s immersive infinity rooms. It will also embark on the most significant North American tour of her work in nearly two decades. The exhibition will debut at the Hirshhorn Museum on 23 February, 2017 and will travel to the Seattle Art Museum (30 June to 10 September 2017), The Broad in Los Angeles (October 2017 to January 2018), the Art Gallery of Ontario (March to May 2018), and the Cleveland Museum of Art (July to October 2018). 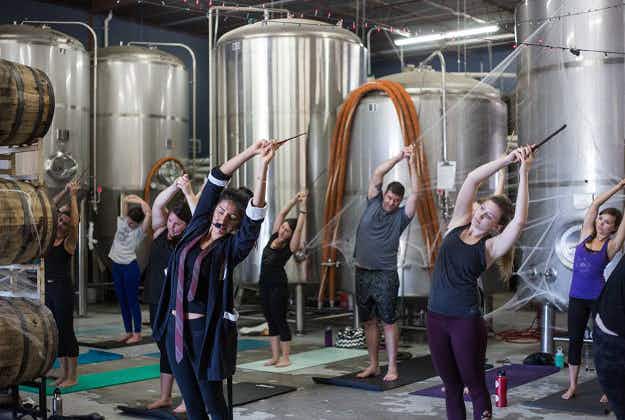 This brewery in Texas has a Harry Potter-themed yoga class…