Coast to coast, there’s endless fun for anyone road tripping with kids in the good, ole US of A. If you’re hitting the road this year with your family, here are a few trips - straight from Lonely Planet's Best Trips series - guaranteed to keep everyone entertained. Research and itineraries by Ryan Ver Berkmoes, Amy Balfour and Mariella Krause. 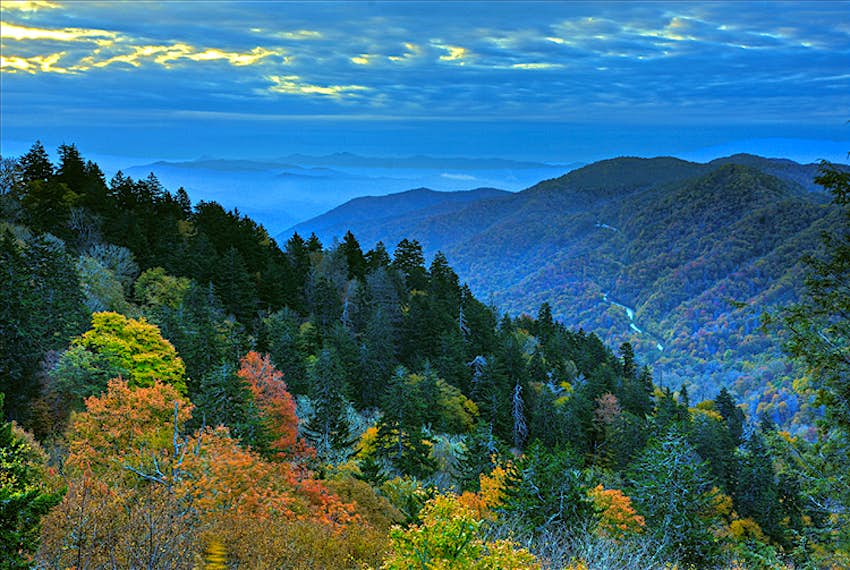 Start in western North Carolina at the Nantahala Outdoor Center, which launches white-water rafting trips, then continue to Bryson City, a friendly mountain town and home to the historic Great Smoky Mountains Railroad (gsmr.com). Take a ride through the dramatic Nantahala Gorge and across Fontana Trestle. Then make time for the Museum of the Cherokee Indian, which traces the history of the tribe with artifacts, an animated exhibit on myths and a detailed look at the Trail of Tears (wikipedia.org).

If you need some exercise, stop off at Clingman’s Dome (nps.gov). You can drive almost all the way to the top; the final climb to the summit requires a half-mile walk on a very steep, paved trail. From the observation tower, you can enjoy a 360-degree view that sweeps across five states.

Head over the border to Tennessee and detour to Cades Cove, a secluded valley that contains the remnants of a 19th-century settlement. From the pull-offs, poke around old churches and farmhouses or hike trails through postcard-perfect meadows filled with deer, wild turkeys and the occasional bear. 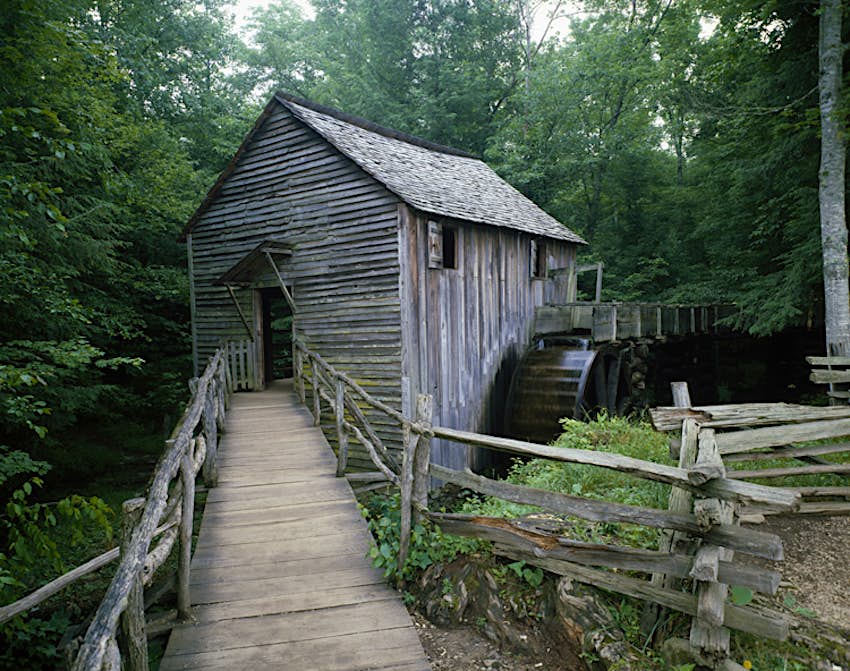 Exploring Cades Cove may turn up a gristmill in a forest. Image by Vernon Sigl / SuperStock / Getty Images.

If the kids are now itching for civilization, backtrack to Gatlinburg (gatlinburg.com), which is filled with pancake houses, mini-golf courses and Ripley’s Believe It or Not Museums. The Gatlinburg Sky Lift (gatlinburgskylift.com) whisks you up high where you can fill your camera with panoramic snapshots.

The town of Pigeon Forge, Tennessee (mypigeonforge.com) is an ode to Dolly Parton and home to the low-key Elvis Museum (elvismuseums.com), chock full of clothing, jewelry and cars. Parton’s theme park, Dollywood, is an enormous love letter to mountain culture. Families pour in to hop on the country-themed rides and see demonstrations of Appalachian crafts. 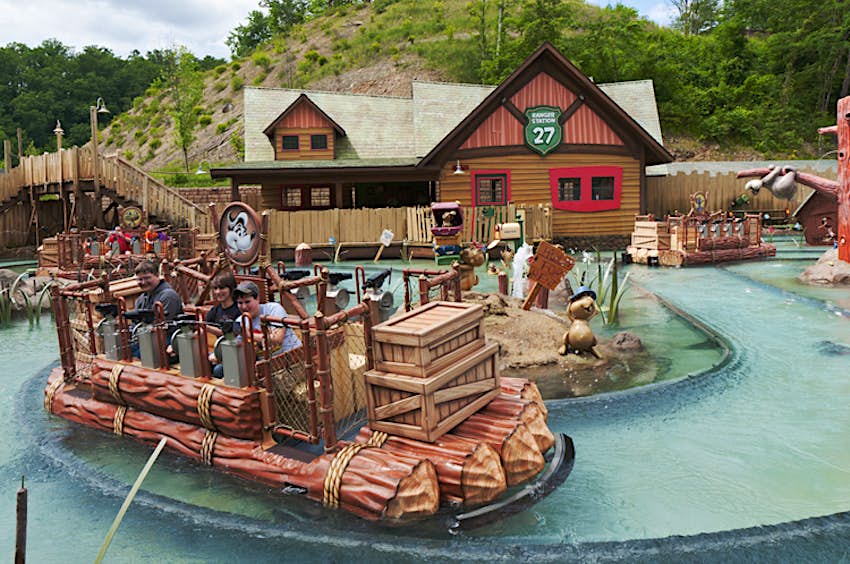 Get your Appalachian kitsch on at Dollywood. Image by Stephen Saks / Lonely Planet Images / Getty Images.

Whether you are a kid, have a kid or ever were a kid, you’ll love this adventure-filled trip. For the full trip itinerary, download this chapter from Florida & the South’s Best Trips.

Kick off on Florida’s Space Coast, where NASA was founded, and visit the Kennedy Space Center. You’ll want to devote most of your day to the exhibits, IMAX theaters, shuttle-launch stimulator and 'Rocket Garden'. If you want some beach time before heading inland, the Canaveral National Seashore protects the longest stretch of undeveloped dunes on Florida’s east coast. 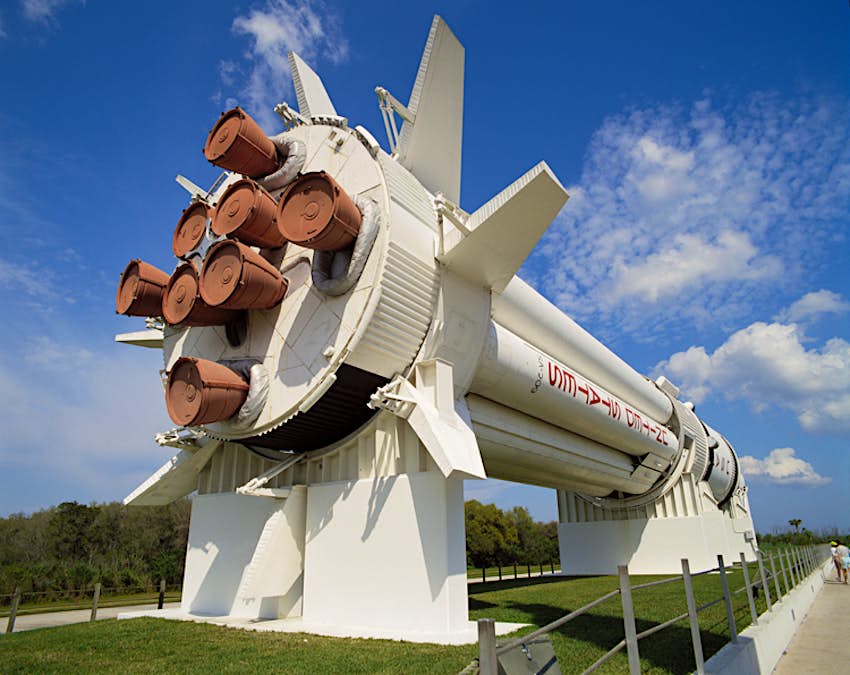 It’s quite easy to get caught up in Disney and Universal, but Orlando has so much more to offer. Take time to explore its lovely neighborhoods, rich performing-arts scene and fantastic gardens, parks and museums. Universal Studios has simulation-heavy rides dedicated to television and the silver screen. Wizarding World of Harry Potter is a magical immersion into Hogwarts and Hogsmeade, brought to life in exquisite detail. Walt Disney World includes four separate theme parks: the famous Magic Kingdom, Epcot, Disney Hollywood Studios and Disney’s Animal Kingdom. 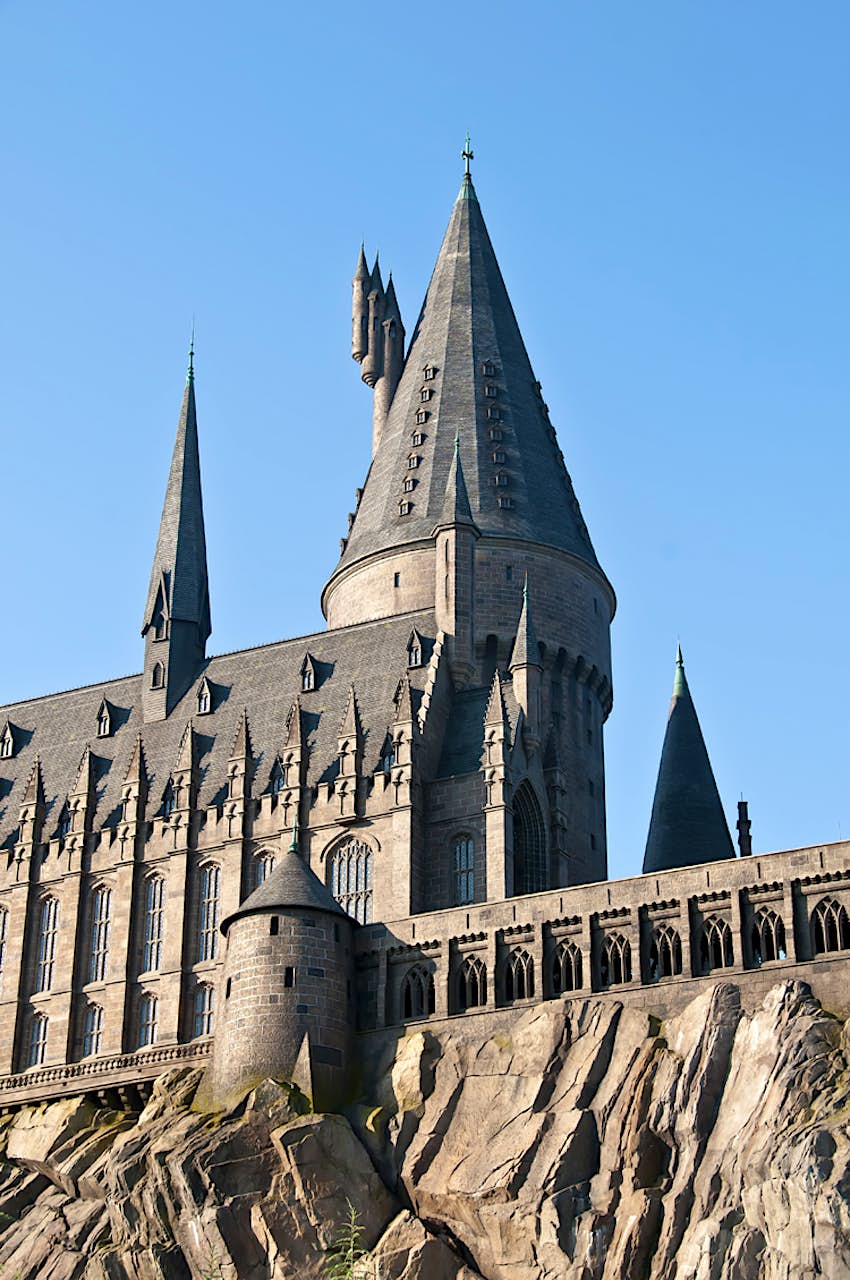 After you've burned out on theme parks, head to Sarasota, with its luscious, white-sand beaches. After a day on the beach, you'll be ready for The Ringling Museum Complex with its Venetian over-the-top Gothic palace of Ca d’Zan (ringling.org) and one-of-a-kind Circus Museum (ringling.org), which has costumes, props, posters and other antiques that relive the excitement of the big-top era. About a half-hour from Sarasota is the Myakka River State Park where 500-1000 alligators make their home. You can take a tram tour or rent a canoe/kayak to see them up close.

End in the upscale but unpretentious Sanibel Island, where leisurely bike rides, shell collecting and wildlife viewing will fill your days. 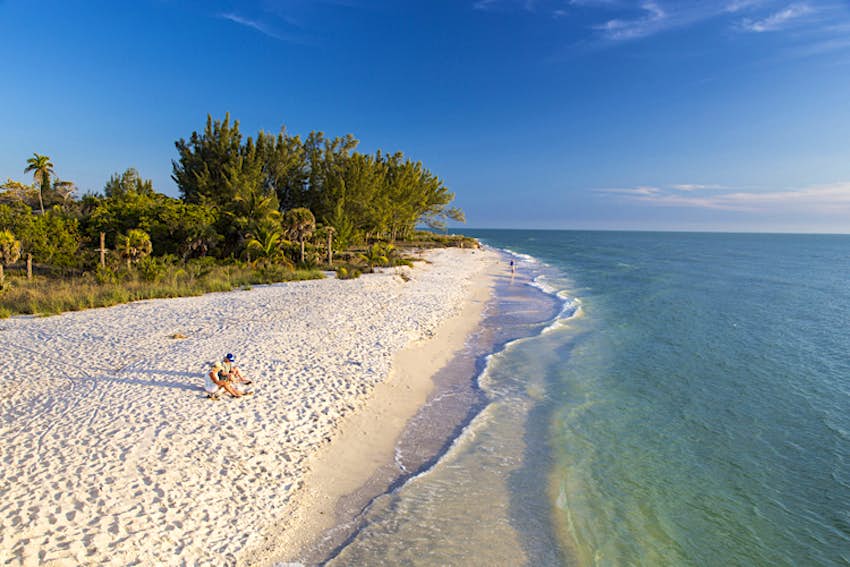 This iconic road trip is a summer-vacation rite of passage for countless kids. For the full trip itinerary, download this chapter from USA’s Best Trips. 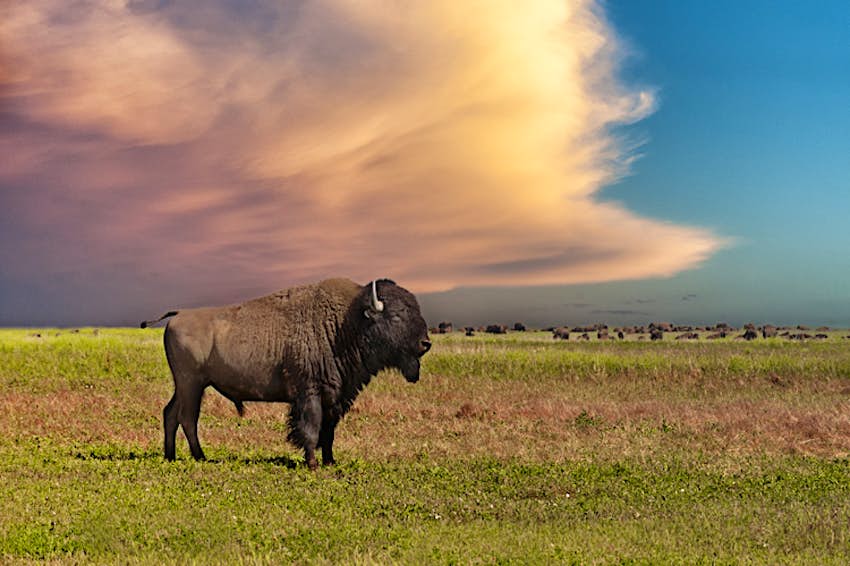 Start in Rapid City (visitrapidcity.com) and explore its downtown (see if you can 'collect' all 42 presidential statues, located on street corners). Take a detour to Badlands National Park and drive the Badlands Loop Rd, stopping at its numerous overlooks. Don’t miss Wall Drug, one of the world’s great tourist traps.

Kitsch reigns in Keystone (keystonechamber.com), a gaudy town bursting with rah-rah patriotism and Old West spirit, and the gateway to Mt Rushmore National Monument (nps.gov). Mt Rushmore’s full impact is appreciated up-close, where you can marvel at the artistry and immense labor of the workers who created it. The Presidential Trail loop passes right below and gives you access to the Sculptor’s Studio, which conveys the drama of how the monument came to be. 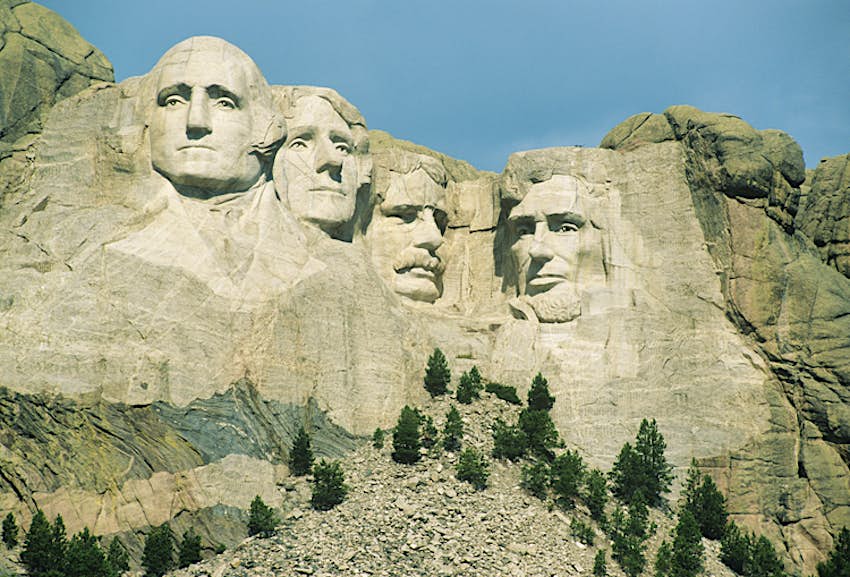 Custer State Park has one of the largest free-roaming buffalo herds in the world, the famous ‘begging burros’ (usatoday.com) and other wildlife like elk, mountain goats, coyotes, and prairie dogs. Cave exploration can be had at Wind Cave National Park and Jewel Cave National Monument (nps.gov), presumed to the longest cave in the world.

The world’s largest monument, Crazy Horse Memorial, is ever a work-in-progress. When finished, it will depict the Sioux leader astride his horse, pointing to the horizon. Although Sioux elders chose Crazy Horse for a monument, hoping to balance the presidential focus of Mt Rushmore, it should be noted that many Native Americans oppose the monument as desecration of sacred land. The visitor center complex includes a Native American museum and cultural center.

One of the most appealing towns up in the hills, Hill City (hillcitysd.com) has the 1880 Train, a classic steam train running through the rugged country to and from Keystone. Deadwood’s (cityofdeadwood.com) atmospheric streets are lined with lavishly restored gold-rush-era buildings. Actors reenact famous shootouts on Main St during the summer and Wild Bill Hickok’s murder is acted out in Saloon No 10. A trial of the killer takes place in the Masonic Temple. 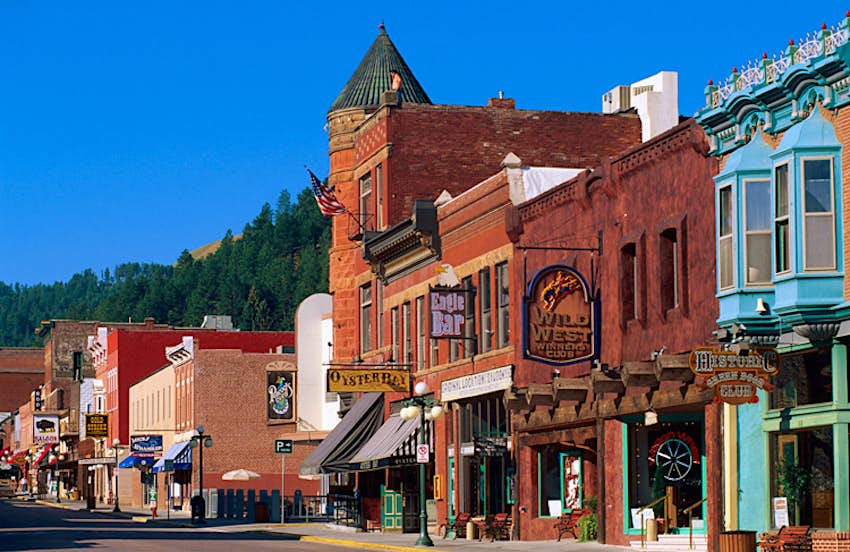 "No law at all in Deadwood, is that true?" - so began the iconic HBO TV series. This is the main street in Deadwood. Image by John Elk III / Lonely Planet Images / Getty Images.

Need even more road trip inspiration? Floor the gas and zoom over to our Pinterest board to see four of our favorite road trips.

For inspiration on how to keep your young explorers entertained whilst on the road – or at home – sign up to the Lonely Planet Kids newsletter.

The best hiking in Patagonia and Tierra Del Fuego