The Via Dinarica hiking trail: a cultural corridor across the Balkans

Waves of fog battled patches of blue sky as the Via Dinarica hiking trail inclined sharply to the junction between Albania, Montenegro and Kosovo. At the 2210m peak, punctuated by a stone tri-border marker, the morning sun won and shone a spotlight on the Albanian shepherd village of Dobërdol below. The residents – now tiny in the distance – were tending their flocks on an apron of pastureland framed by mountain summits.

As the path reached the ridgeline and then descended into Kosovo, the settlement receded from view. The symbolism, however, was still apparent: a trek on this new trans-Balkans route in southeastern Europe can link cultures and enable cross-border discovery in a way politics have failed to do for centuries.

The path to Bobotov Kuk in Montenegro’s Durmitor mountain range © flöschen / CC BY 2.0

The Via Dinarica (viadinarica.com) is a 1930km mega-trail which connects the countries of the Western Balkans – a burgeoning adventure-tourism powerhouse. From north to south, the main artery of the network, known as the White Trail (trail.viadinarica.com), traverses Slovenia, Croatia, Bosnia & Hercegovina, Montenegro, Albania, Kosovo and North Macedonia, and links the peaks along the Dinaric Alps and Shar mountain ranges. The trekking route – which can either be DIY or guided and can be experienced over three months, three days, or three hours – is a corridor linking traditional cultures in an area that is both under-visited and misperceived.

The mission to bring adventure travellers to the Balkans and change those misperceptions began in 2010 when the first Via Dinarica project connected national parks in Bosnia & Hercegovina and Montenegro. In 2013 the trail from Slovenia to Kosovo was hiked and documented, with Macedonia added in 2015. That walk strung together ex-Yugoslavian trekking paths with former military tracks, ancient trading routes and shepherds’ transversals. Today, nearly the entire hike is marked. (There are sections in Bosnia & Hercegovina, Montenegro, Albania and North Macedonia awaiting signage.)

Starting in 2014, adventure travel operators across the region began collaborating to codify professional standards and promote the trail through the Via Dinarica Alliance (via-dinarica.org). They include VMD (vmd.hr) in Croatia, Green Visions (greenvisions.ba) in Bosnia & Hercegovina, Black Mountain (montenegroholiday.com) in Montenegro and Outdoor Albania (outdooralbania.com) in Albania. Below is a summary of their cross-border trips which showcase this cultural corridor and provide useful itineraries for DIY trekkers. For a circular route through the mountains of southern Montenegro, northern Albania and eastern Kosovo, see the Peaks of the Balkans trail.

The Via Dinarica journey begins in Ljubljana, the Slovenian capital. From the deep-karst cave of Postojna – famous for its stalagmite and stalactite formations – hikers climb to the top of Veliki Snežnik, the highest non-Alpine peak in Slovenia. At 1796m, you can see across to the Julian Alps, rippling to the west, and the Dinaric Alps, which you will hike to the south.

Across the border in Croatia, the trail takes you through three national parks that parallel the Adriatic and its northern islands. The highlight is the 145km-long Velebit range (hps.hr), the spiritual centre of Croatian mountaineering. This stretch of the hike ends in Paklenica National Park – a hub for world-class climbing – on the Dalmatian coast.

From Split, Croatia’s second-biggest city and the largest on the Adriatic, hikers head to the base of Biokovo mountain range, which abuts the Central Dalmatian coast. From here, climbing the 1762m Sveti Jure – the tallest summit in the range – rewards you with commanding views from the peak’s tiny chapel over the Makarska Riviera and a clutch of the country’s 1185 islands.

After passing into Bosnia, the journey continues to Blidinje Nature Park and Čvrsnica mountain. Trekkers overnight at the mountain hut on Veliki Vilinac Peak before hiking to Hajdučka Vrata, a natural stone arch. On Bjelašnica mountain, south of Bosnia’s capital Sarajevo, you can try the region’s trademark homemade burek (a meat-filled pastry with a flaky-thin crust) in the village of Umoljani before visiting Lukomir, the highest and one of the most traditional shepherd villages in Bosnia.

Looking down from the summit of Maglić, Bosnia's highest peak © NH53 / CC BY 2.0

The Via Dinarica project started here in 2010, when a pilot trail connected Sutjeska National Park, the oldest in Bosnia & Hercegovina, to Montenegro’s Durmitor National Park, a Unesco World Heritage Site. Since then, it remains the trail’s classic leg and a great cross-border spot to get started hiking in the region. Highlights include a summit of Bosnia’s highest peak, the 2386m Maglić, and rafting in the Tara River, which is cradled in Europe’s deepest canyon at 1300m. The river mainly runs through Montenegro but forms part of the border between the two countries.

On the Montenegrin side, from the edge of the Tara Canyon a demanding 19km hike keeps you surrounded by a towering amphitheatre of the country’s highest peaks, including the 2523m Bobotov Kuk, on the way to Mountain Hut Skrka. The final destination is the town of Žabljak, the region’s version of Chamonix, in the middle of Durmitor National Park.

A trek in Valbona National Park in Albania’s Accursed Mountains © NH53 / CC BY 2.0

Hiking in the Albanian Alps – as locals call the mountains in the country’s northern tip – ranks among the top surprises within this burgeoning Balkans playground. The Accursed Mountains, as they are technically known, provide the perfect combination of adventure and authenticity. Rugged peaks, well-marked trails and stays in rural guesthouses and shepherd settlements give hikers a chance to rough it and have a home base each night to eat fresh specialties and interact with locals.

From the Albanian town of Shkodra, trekkers move on to the mountain village of Theth. A seven-hour hike – among peaks reaching over 2700m – takes you from Theth to Valbona Valley National Parks. Along the way to the Kosovo border, hikers overnight in family homestays and in the Dobërdol shepherd community.

One of the most challenging stretches of the Via Dinarica, the trail here follows the Shar mountain range. Long treks and high altitudes are balanced with glacial lakes and some of the most beautiful and remote landscapes in the entire region. Starting in the north, a ridgeline of peaks – there are more than 20 higher than 2500m – straddle the border between Kosovo and North Macedonia, and then North Macedonia and Albania.

The route starts with Mt Ljuboten, in the northwest corner of the country, and offers opportunities to sample some of the Balkans’ best gastronomy. Bagging the peak of Mt Plat, for instance, is rewarded with food prepared by locals in North Macedonia’s Mavrovo National Park. Tackling Mt Golem Korab the highest point in North Macedonia at 2764m, is countered with homemade breads, roasted vegetables, farm cheeses and wine in Galičnik village. The journey ends in North Macedonia’s capital Skopje and, undoubtedly, with conversations about which Via Dinarica leg to tackle next year. 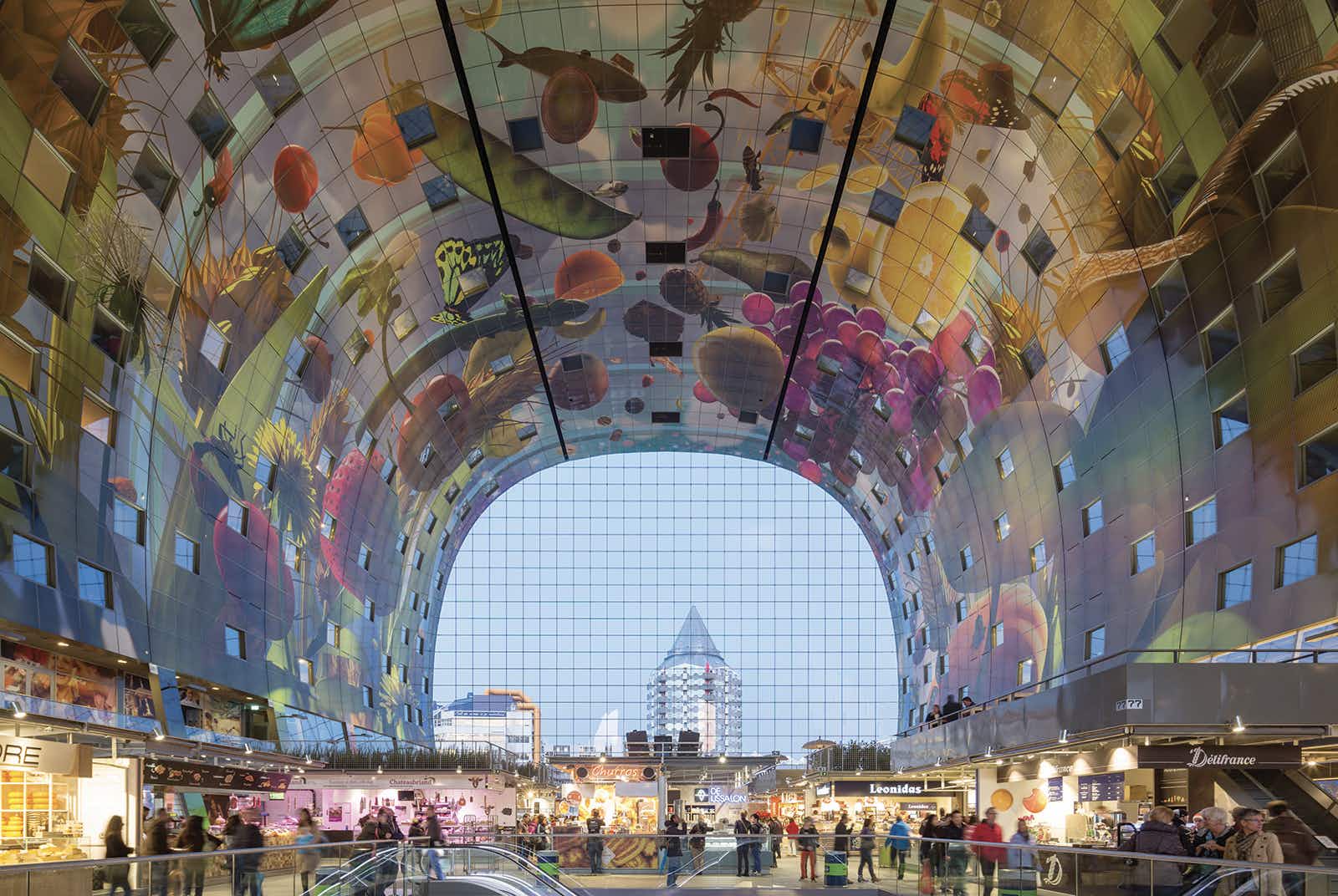 Experiencing the public art of Rotterdam

The ghosts of Bucharest’s past: a tour of the Spring…