The Heartland’s best hits: top Kansas sights along I-70

This is the stuff road trips through Middle America are made of: slurping milkshakes at a Formica countertop in a diner that hasn’t changed since 1950, cruising by fields of sunflowers and amber waves of grain that stretch as far as the eye can see, and stopping at the quirky, always-superlative roadside attractions that call for your attention in handmade signs along the interstate.

Interstate 70 belts northern Kansas for 425 miles in a straight-as-an-arrow fashion from east to west. Although it’s tempting to speed through and shoot for Denver, the off-the-wall attractions and towns big and small along Kansas’ ‘Main Street’ deserve a short detour.

From Kansas City to the Colorado border, here are nine stops that are worth stretching your legs for.

Kansas City has to be one of the hippest spots on the Plains, and indeed we named it one of the top travel destinations of 2014. Divided between Kansas and Missouri, Kansas City has blossomed out of its cow-town and industrial past, with artists flocking to set up galleries in abandoned warehouses in the Crossroads District and bucket-list-worthy barbecue being slow-cooked at more than 100 restaurants.

First stroll the Country Club Plaza, a posh shopping district built in the 1920s, whose founder modelled the area’s architecture on Seville, Spain – including a half-size replica of the Giralda Tower, the tallest building in the Plaza. Statues, murals, mosaics and fountains line the streets, and a quick, 15-minute walk will lead you to even more beauty at the Nelson-Atkins Museum of Art.

Locals will never be able to agree on KC’s best barbecue joint, but the most iconic is Joe's Kansas City Bar-B-Que. The original location is still housed in a building shared with a gas station, where former president Barack Obama has been known to stop for lunch.

Lawrence, a progressive, vibrant college town home to the University of Kansas, is a quick 40-mile jaunt west of Kansas City on I-70. The town’s patron saint is James Naismith, who invented basketball at the turn of the century, and Lawrence residents don full crimson-and-blue regalia on game day.

Time your visit right and catch a game at the venerable Allen Fieldhouse, named the loudest and most intimidating arena in college basketball. If the game’s not on, stop by the Booth Family Hall of Athletics at the entrance to the Fieldhouse and pay heed to KU greats in college sports.

Kansas’ most charming main street, Mass Street (short for Massachusetts, where the city’s free-state-advocate founders hailed from), is loaded with local shops, restaurants and bars in buildings that date back to 1856. Don’t miss Free State Brewing in a renovated street car station on the north end of Mass, the state’s first legal brewery in more than 100 years.

Make a pitstop in Topeka, the state capital, and climb the 296 steps to the dome of the Capitol Building, reopened in 2014 after a $330 million renovation. A mile away stands another political landmark, the  Brown v. Board of Education National Historic Site, a museum that commemorates the African American Topeka parents who took their case to the Supreme Court to end segregation in public schools. The museum sits inside a once-segregated elementary school.

Hungry? Grab some burgers from Bobo’s Drive-In, famous for its thin, crispy-edged burger patties and its apple pie. Plop down at the five-person, horseshoe-shaped counter inside the diner or wait for a carhop outside if you’re in a rush.

Feel like you’re not in Kansas anymore at the Oz Museum, a Wamego institution dedicated to The Wizard of Oz. Stand in awe as you learn how innovative and homemade the special effects were in this 1939 classic. Even the toilets here are made by a company called Toto.

Abilene certainly still likes Ike. Dwight D. Eisenhower, former president and Supreme Commander of the Allied Forces in Europe during World War II, grew up here and is now buried at the Eisenhower Presidential Center. Take a tour of Ike’s modest boyhood home and set aside a few hours for the dense museum that runs through the beginnings of WWII to Eisenhower’s military industrial complex speech at the end of his presidency.

Chicken dinners with fresh biscuits, coleslaw and mashed potatoes have been served at the beloved Brookville Hotel since 1915. A traditional menu won’t be provided — you don’t come here for anything else.

A former Kansas governor declared Lucas, a tiny town of 400, the Grassroots Art Capital of Kansas because of the community’s dedication to producing folk and outsider art. A Civil War veteran and eccentric artist named Samuel Dinsmoor started this trend in 1907 when he built a ‘log cabin’ from local limestone and called it the Garden of Eden. Dinsmoor spent his life sculpting more than 200 huge concrete figures that surround the house and symbolize his political and religious views. When Dinsmoor died in 1932, he wanted his remains to be displayed to the public, which you can still see nearly nine decades later.

If nothing else, a stop in Lucas is warranted for a bathroom break alone. Bowl Plaza is the result of the locals’ four-year dream to have a restroom downtown. In true Lucas fashion, the building is shaped like a toilet tank, which you enter through a door that looks like a toilet lid. Inside, the walls are covered with jeweled mosaics from floor to ceiling.

Getting there: Leave I-70 for Lucas at exit 206 and then twist along a picturesque 18-mile highway past Wilson Lake.

Like many parts of northwestern Kansas, Victoria has a strong connection to the Volga Germans. These immigrants built the soaring St Fidelis Church, nicknamed the Cathedral of the Plains, with its 140-foot towers in 1911, and family inscriptions in German are still etched into the stained glass windows.

A wind-swept town on the High Plains, Hays grew up around an Army fort, now the Fort Hays Historic Site, which was built in the 1860s to protect railroad workers from Native Americans. Dinosaur hunters should head to the Sternberg Museum of Natural History, which includes displays on local fossil finds, such as the famous fish-within-a-fish, excavated in Kansas in 1952.

Rising out of the vast, flat prairie like alien sculptures, the striped Monument Rocks stand 80 feet high. Made of chalk, these formations were shaped 80 million years ago when an ocean covered Kansas. Although water helped create these rocks, water is also erasing them from the landscape because the chalk erodes easily. Each year the keyhole arch is a slightly different shape because of weathering.

Getting there: Leave I-70 at exit 76 near Oakley. The site is 25 miles southeast via US 83 and dirt county roads. 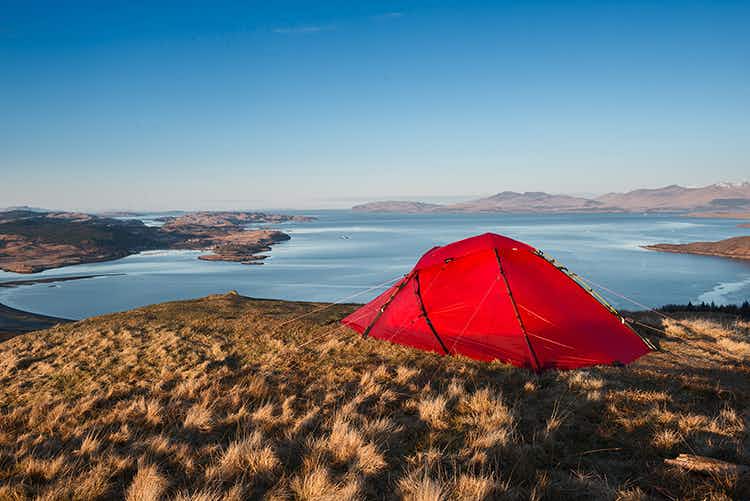 A wild camper’s guide to the world