It is 100 years since the death of Jack London, the novelist whose rugged stories are synonymous with the American North. Yet the tug of the wilderness that London so eloquently evoked continues to resound in Alaska, one of the few places in the US where you can still get up close to nature’s extremes.

Considering its size and abundance of epic scenery, it is surprising how few Americans include Alaska on their travel resumes. One recent exception is Barack Obama, who became the first sitting US president to cross the Arctic Circle in September 2015 when he visited the small community of Kotzebue. One of the main purposes of Obama’s trip was to draw attention to climate change and the plight of Alaska’s rapidly retreating glaciers, a process seen most graphically at the easy-to-visit Exit Glacier on the Kenai Peninsula. Emulating the president, who appeared on the TV survival show Running Wild chomping on a half-mauled salmon scavenged by British adventure-junkie Bear Grylls, might not be top of everyone’s Alaska checklist. But, getting to know this land of extremes – its giant mountains, subarctic communities and tiny islands bobbing in the Bering Sea – provides adventure on an heroic scale.

Dalton Highway – a journey into the Arctic Circle

It’s a truth widely acknowledged that America’s national bus network isn’t very comprehensive. But, as always, there are exceptions to the rule. The Dalton Highway is one of only two roads in North America to cross the Arctic Circle. It also – somewhat improbably – offers a summer-only bus service, courtesy of Dalton Highway Express. The 16-hour, 500-mile journey begins in the relative harmony of Fairbanks before pitching abruptly into less civilized climes along a route that parallels the Trans-Alaska Pipeline to its source at the Prudhoe Bay Oil Field. Along the way, the feral and periodically rough highway forges through radically contrasting landscapes including boreal forest, the Gothic majesty of the Brooks Range and the chilling flatness of the Arctic tundra where animals like caribou and musk oxen are measured by the herd.

The Dalton is a classic case of the journey being more important than the destination. Notwithstanding there’s a certain surreal-ness about its endpoint, the sprawling industrial dystopia of Deadhorse where you can huddle up in the Prudhoe Bay Hotel (www.prudhoebayhotel.com) with its heavy-duty carpets and roughneck, calendar-checking oil-workers before dipping your toe briefly in the Arctic Ocean. Comfortable – no; legendary – yes!

Follow the arc of adventure in the Aleutian Islands

While there’s no dearth of summer cruise ships plying the Inside Passage between the Lower 48 and Alaska, few of them venture beyond the diminutive port of Seward. Yet, Alaska stretches westward for another one thousand miles through a trippy landscape of dozing volcanoes, velvety mountains and far-flung, off-the-grid communities. Access to the elongated Alaska Peninsula and the barren arc of Aleutian Islands that lie beyond is via a summer-only ferry called the MV Tustumena. As well as being possibly the world’s most economical form of public transport, the ‘Trusty Tusty’ also acts as a vital postal service, floating restaurant and welcome reverie-breaker for the neckl­­ace of pinprick communities that punctuate the route.

A Russian Orthodox cathedral in the Aleutian Islands © James Brooks / CC BY 2.0

If the weather holds and the barf bags remain empty, travelers can enjoy some memorable bonuses on-board. Breaching whales, smoking volcanic peaks and brown bears patrolling the shorelines are par for the course on long sparkling summer days (and nights). Then there are the fleeting but fascinating stops along the way. There’s mega-friendly Kodiak, land of giant ursine beasts and legendary fishers; the bird nirvana of Cold Bay; the wilderness-defying fishing community of False Pass; and the weather-beaten final port-of-call, Dutch Harbor where you’ll find unexpected vestiges of Russian colonial history and poignant monuments to a little-known WWII battle between the US and the Japanese. To describe this comfortable if blustery journey to the edge of the continent as epic grossly undersells it. Book a sleeping berth for the three-day voyage with Alaska Marine Highway and come up with your own superlatives.

To understand Wrangell-St Elias’ extremes you first have to decipher its dimensions. The world’s second largest national park is big enough to fit Yosemite, Yellowstone and Switzerland combined, but it harbors a population that could barely fill an average-sized Greyhound bus. Most of the residents inhabit the throwback, one-horse town of McCarthy where Klondike-era beards have never gone out of fashion. Accessible by a rutted road from Glennallen, McCarthy is an ideal place to organize sorties to the nearby copper mining ‘ghost town’ of Kennicott (a national historic site), or follow lonesome hiking trails to abandoned mine-shafts.

More topically, it is also a region where you can investigate the health of some of Alaska’s retreating glaciers. The Root Glacier tumbles like a giant ice river within stone-pitching distance of Kennicott from where you can hike out onto its crystalline surface for bracing glacier walks or more daring ice-climbs. For full Wrangell-St Elias immersion, you’ll need to charter a bush plane to fly you into its gaping interior where you can quite conceivably tread where no foot has trodden before. Guiding companies such as St Elias Alpine Guides help soften the landing organizing mountain ascents and long-distance treks as well as excursions on the Root Glacier.

Outdoor adventures aside, McCarthy’s most unexpected pleasure is its genuine frontier spirit – the chance to shoot pool, chink beer glasses or swap bear stories in the Golden Saloon with some real-life Alaskan sourdoughs living on the edge.

Find the Wild West in Nome

Unconnected to Alaska’s relatively meagre road network and situated so close to Russia you can practically smell the beef stroganoff, Nome is about as ‘wild’ and ‘west’ as mainland America gets. Finding extremes this far north is like finding good art in Paris. The dustily disheveled town harbors a good selection of scruffy saloons populated by locals who might give a traveler wildlife-spotting tips if you ask nicely. Most visitors arrive in March to cheer the end of the world’s toughest dog-sled race, the Iditarod, which is so tough, in fact, that dogs have been known to die during the race. Quieter times to visit are June and November, when the birders arrive to check migrating waterfowl off their lifelists.

Nome gained infamy in 1900 when it became the stage for Alaska’s most notorious gold rush (Klondike’s wilder and more debauch sequel) and remnants of the glory days scatter the arctic tundra. You can rent a car and seek out abandoned gold dredges or admire a surreal collection of rusty Locomotives dubbed ‘The Last Train to Nowhere’. Though the ‘fever’ has died down somewhat since the days when Wyatt Earp ran the local Dexter Saloon, you can still pan for gold on Nome’s frigid beaches – or watch other hopefuls try their luck. In August 2016, Crystal Cruises (crystalcruises.com) will include Nome as a stop on the first ever luxury cruise through the Northwest Passage.

Sit at the base of Denali

For over a century it was named after an American president who never set foot in Alaska, but in 2015 North America’s highest mountain was re-christened by President Obama. To cheers from many Alaskans, the mountain formerly known as McKinley became Denali or ‘the high one’, inheriting its more appropriate Alaska Native name. It also, somewhat bizarrely, lost ten feet in height (down to 20,310ft) thanks to a re-measuring process carried out by the US Geological Survey.

What hasn’t changed is Denali’s epic grandeur. Unlike Everest which is hemmed in by other mountains, Alaska’s tallest peak rises unchallenged off the surrounding tundra like an ice-encrusted asteroid dropped in from outer space. Even when viewed from the comfortable confines of the Denali Star train 60 miles away, it looks dangerous and foreboding (the train slows down in meek homage).

Adventurers with iron fitness and over $7000 to spare can climb the mountain with a reputed guiding company. For a safer and cheaper experience, try studying it from a distance from a train or one of Denali National Park’s unique shuttle buses (nps.gov/dena). To enjoy more extreme vistas without extreme energy expenditure, you can take a flightseeing trip from the nearby town of Talkeetna. Trips run by Talkeetna Air Taxi include a brief stopover on a high altitude glacier. 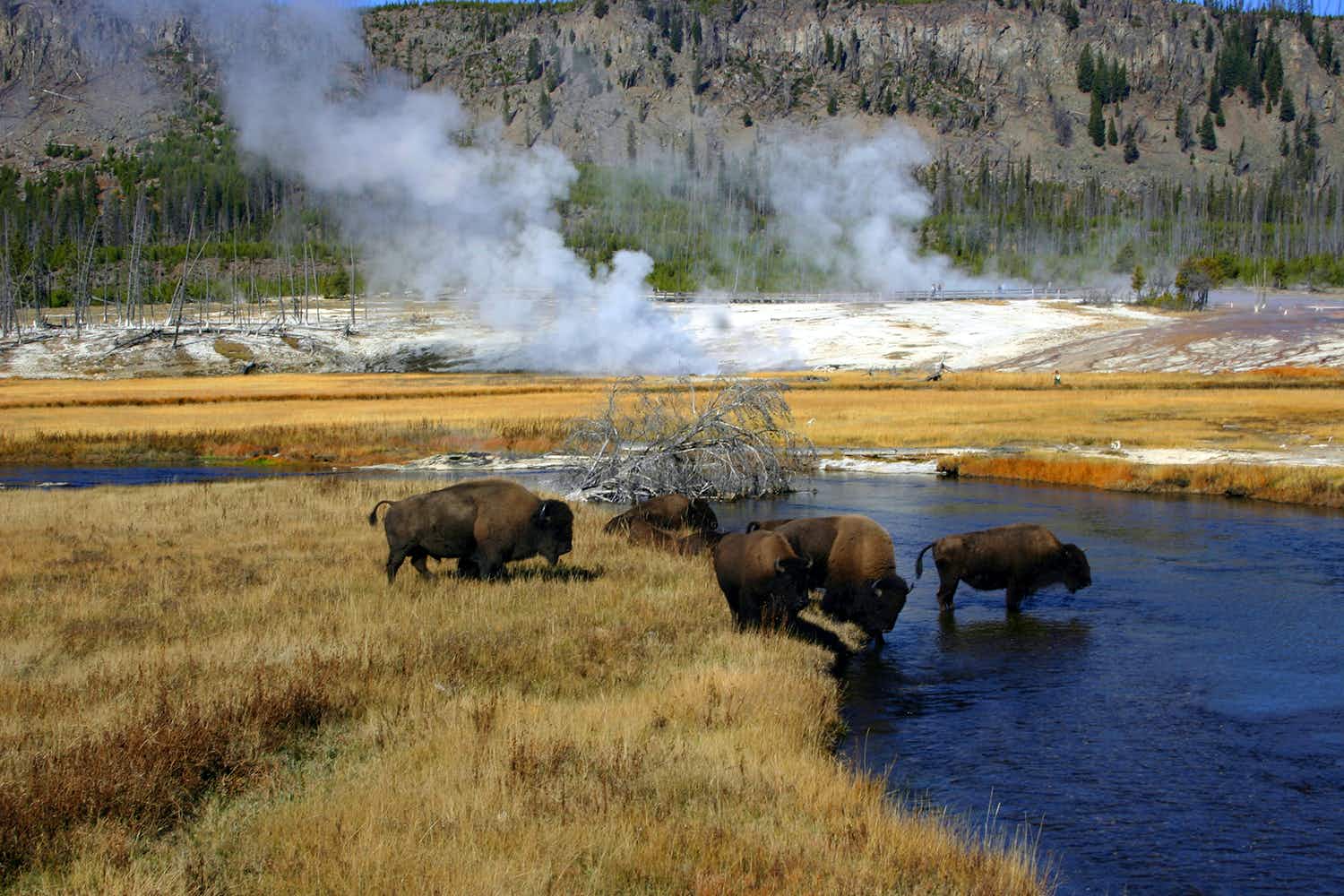 Insider’s guide to Yellowstone: where to trek and geyser gaze… 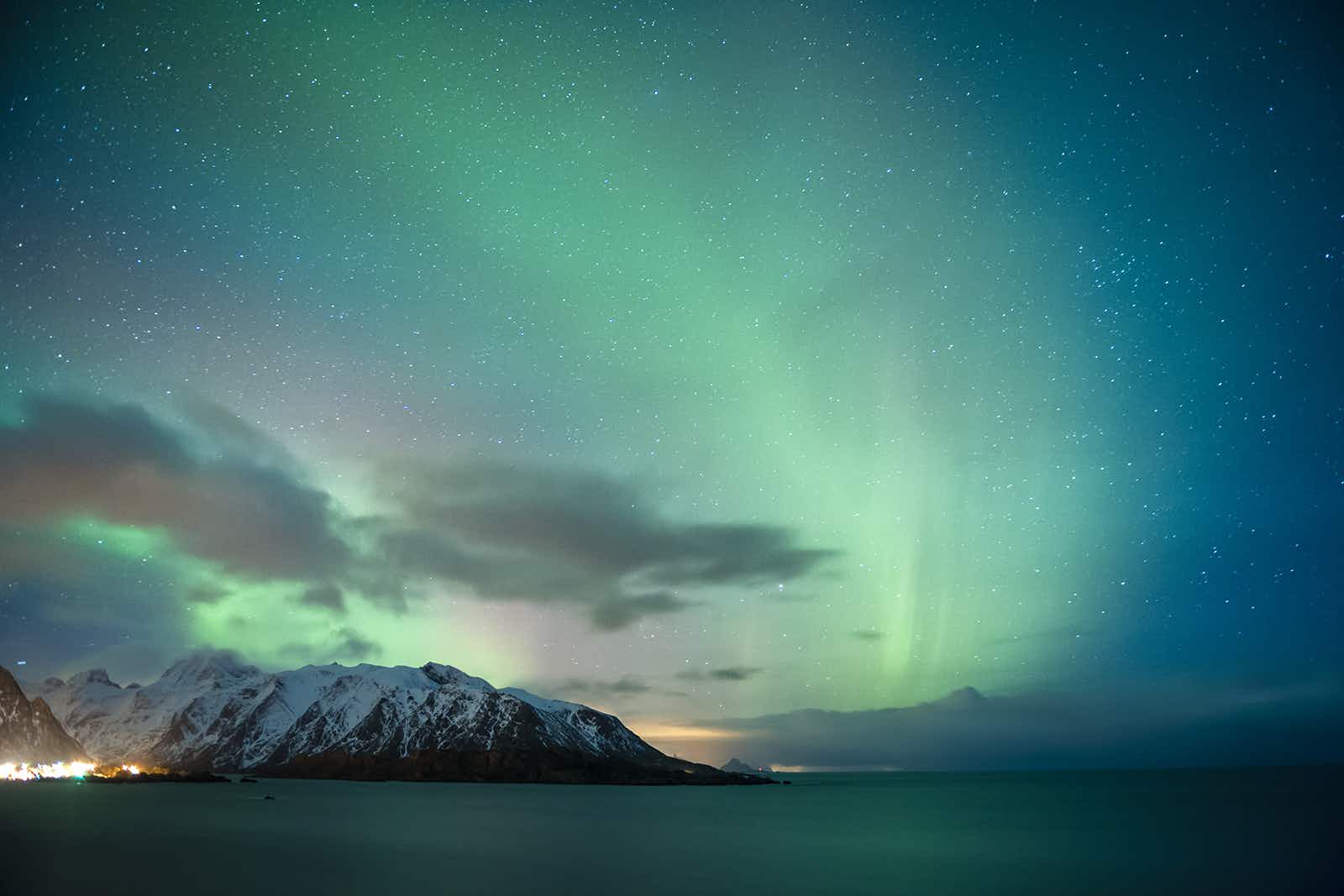 The Lofoten Islands, Norway: there but for the grace of…