If you do much travel in the USA, particularly by road, you WILL at some point make it through central Oklahoma, where I grew up and went to college. I left years ago, but never shook off the notion that it's 'home' to me, down deep. And despite a wide travel record, few trips have been more memorable to me than taking friends back to the state of prairies, plains, mountains and meadows that's named for the Choctaw words for 'red people.'

Here are 22 things – of at least 200 candidates – I consider when taking them back for a few days.

No state has more surviving miles of Route 66 than Oklahoma, and in fact the road was born (and got its memorable number) because of the efforts of Tulsan Cyrus Avery.

Many champion sites in the plains of western Oklahoma, but the best stretch is between Tulsa and Oklahoma City, neatly snubbing the Will Rogers Turnpike (whose creation, as the Turner Turnpike, in 1953 hastened the demise of Route 66). The route is contiguous, a contour-hugging ride through a few cute towns with antique shops. Arcadia has a big round red barn to see, Stroud has the best eats at the landmark Rock Cafe (peach cobbler a la mode and buffalo burgers are tops).

The Sooner state's Vietnamese population is centered in the capital, and around the so-called 'Asian District' around 23rd and Classen, a short drive northwest of downtown. Old Route 66 actually came through here – the milk bottle building near that intersection was an old '66 stop and now serves the city's best Vietnamese banh mi sandwiches. As authentic bowl of phở (noodle soup) can be found at several noodle shops around here too.

Frank Lloyd Wright always wanted to build a skyscraper. He did it once, in Bartlesville, an hour north of Tulsa. The Price Tower – originally opened in 1956 as high-end apartments and office spaces for the burgeoning oil industry in town (Phillips 66 was founded here) – is now open as a museum, offering up-close looks at Frank's master plan, and some are re-fashioned into hotel rooms, offering superb views over the Osage Hills. It's well worth splurging for a night. Plus it's a candidate for UNESCO World Heritage Site status this year.

The USA has one cobblestone village: little Medicine Park (outside Lawton, in southwestern Oklahoma). Set aside a stream long known for curative powers, Medicine Park was founded, as Oklahoma's 'first resort,' in 1908 and saw many celebs and outlaws (Al Capone, Pretty Boy Floyd, Bonnie and Clyde) come to unwind, cannonball in the swimming hole, catch live music and take a look at the nearby Wichita Mountains, a prehistoric range dating 500 million years with buffalo and a wonderful lookout atop Mt Scott. Also, Apache leader Geronimo is buried at nearby Fort Sill.

Cobblestone cottages – naturally formed stones of red granite – can be rented from $100 a night, some with a free third-night.

Outside Bartlesville, in the wonderful Osage Hills of Osage County (the ones Western swing legend Bob Wills sang about), Woolaroc was the summer home of Frank Phillips of Phillips 66 fame. It's simply my favorite museum of all time. The museum collection of Native American artwork, artifacts and Western-themed paintings is fantastic, as is the drive through untouched prairie filled with wildlife like buffalo and pronghorn. The buffalo burgers aren't bad either. Afterwards consider driving on to the Tallgrass Prairie National Preserve, north of Pawhuska. 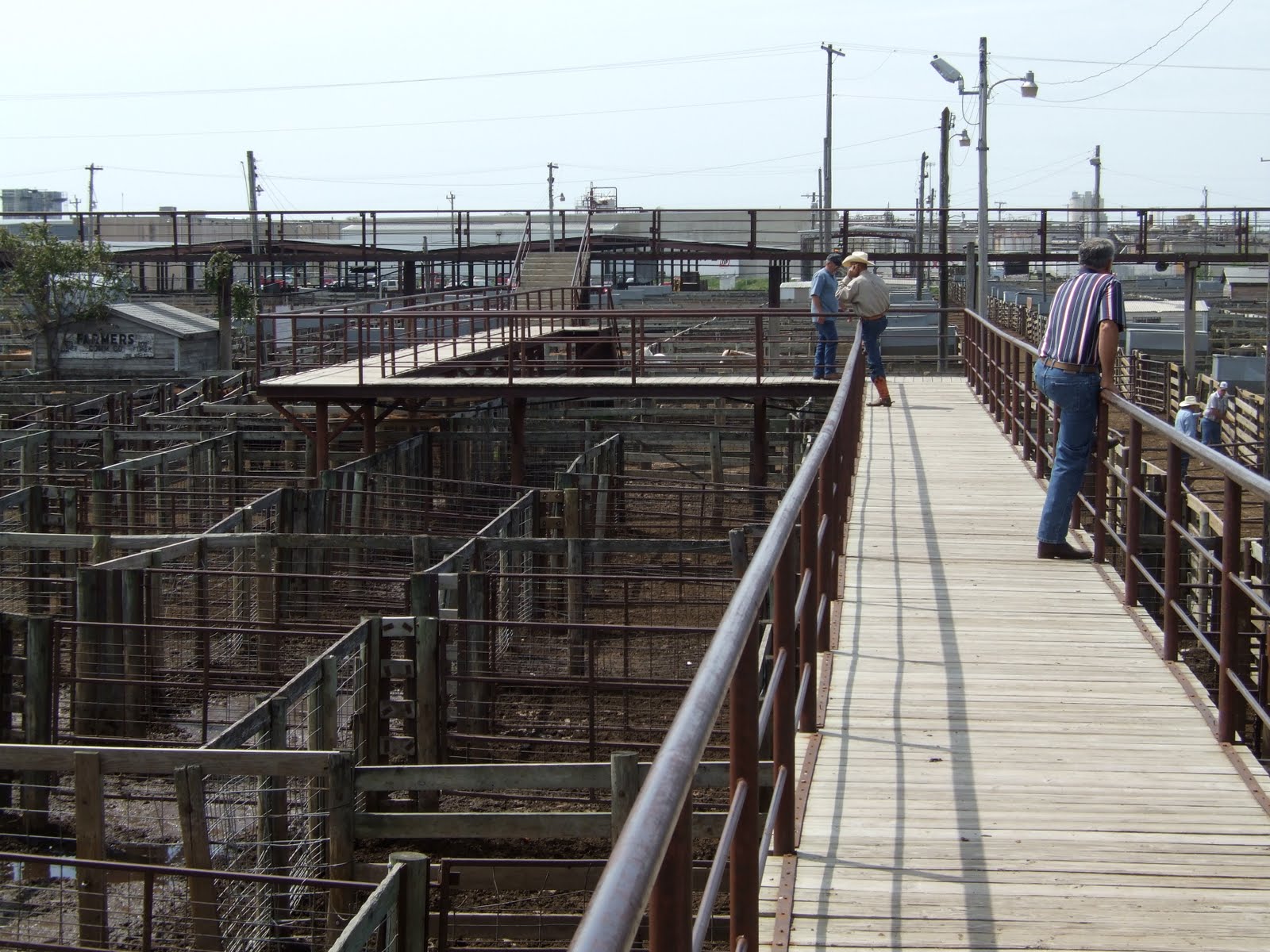 Open for bidding on Monday and Tuesday mornings, the OKC Stockyards is a real-deal experience, an auction hall for cattle you reach by plank boards over a sea of cow pens. If you don't mind the stench, you can eat at the little cafe (good for cobbler and meatloaf, and coffee in styrofoam cups), but it's fascinating to watch the auctioneer ply his trade for a mostly cowboy hatted crew of bidders. You can pick up big-buckled belts, Wranglers and Stetsons at nearby western shops.

I talked about Thanksgiving for a '76-Second Travel Show' episode from here a couple years ago.

Sometimes called 'America's Outback,' the lonely panhandle is what makes Oklahoma's shape the best of all time (something Clint Eastwood, apparently, is aware of). And it's there because Texas wanted slaves and, observing the Missouri Compromise, sliced off the top of its territory at statehood. Overlooked even by Okies often, it's home to the state's highest point: Black Mesa State Park.

I drove through it once on a New Mexico trip specifically because you can snub Texas by doing so.

Read this one closely. Oklahoma was home to 40 or so African-American towns, settled in the early 20th century – something that didn't quite make your average Oklahoma public school history-class curriculum. The biggest and most successful, and still going, is Boley, famed for its three-day Memorial Day Weekend rodeo and parade (see my '76-Second Travel Show' video and read more on the Boley rodeo experience). Visitors can arrange to see a small historical museum, or peek into the bank that Pretty Boy Floyd's gang failed to rob in 1932 (several lost their lives that day when the city came out to block their exit).

The 'black rodeo' here, set up in 1961 (though Creek Indian/African-American events date much longer here), is an all-timer event. Particularly if you track down Linda Sykes' 'potato on a stick,' sworn locally to be a Boley invention – said one regular from Oklahoma City, 'I come every year for her potato on a stick.' Dunk it in hot sauce, ketchup or even chocolate. 'I'll dip it in whatever you want,' Linda says. 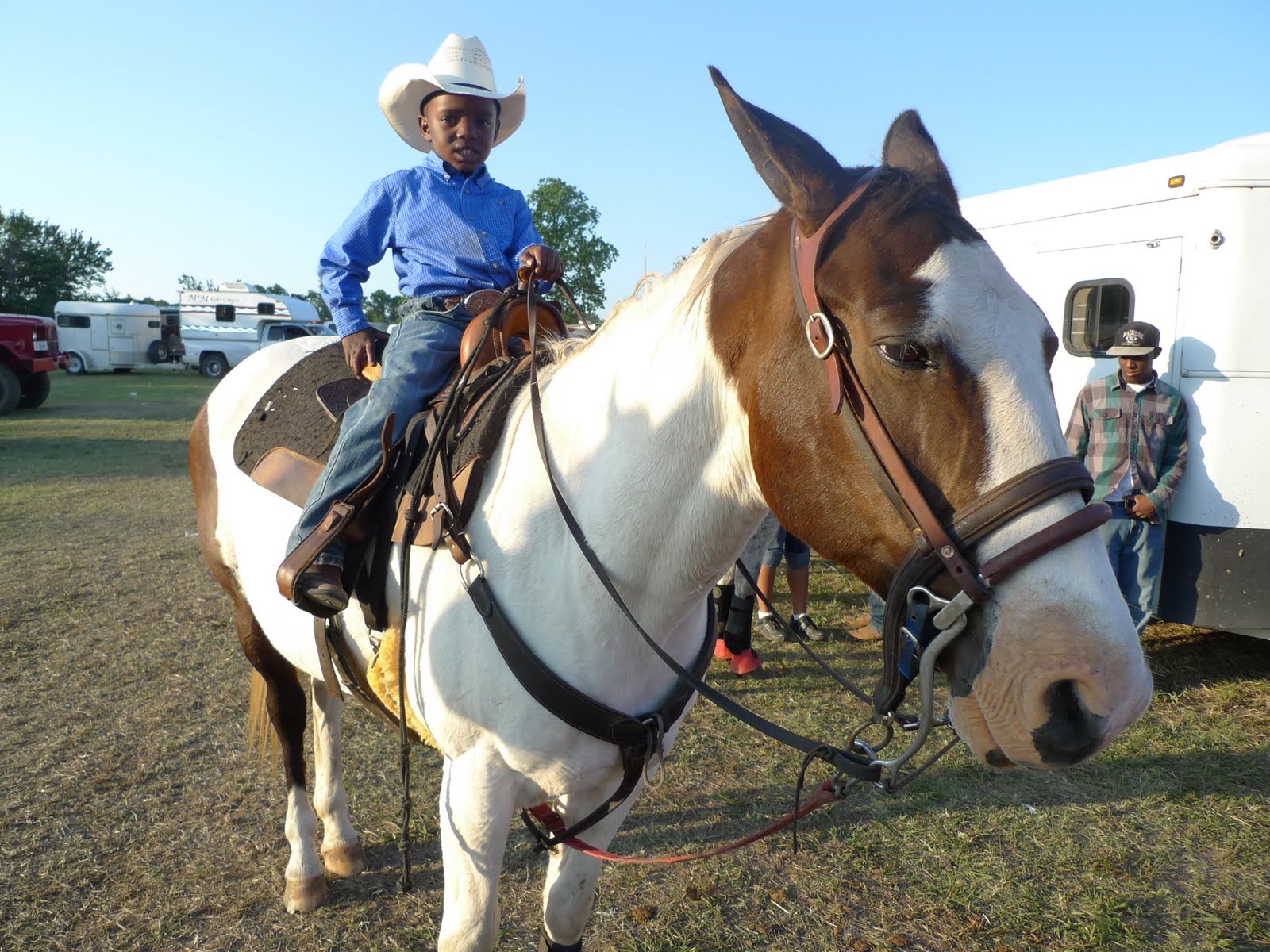 The Oral Roberts University campus looks like a retro-futuristic, Jetsons-meets-Jesus complex that visitors are welcome to stroll around. Pop by to take a photo of Oral's huge praying hands sculpture and go up the Prayer Tower, a spiked gleaming-gold tower with an observatory deck you're free to go up. No pressure to pray.

Try timing your visit with one of Oklahoma's biggest events. July's Okie Noodling in Paul's Valley is the legendary catfish hunt by hand, immortalized by local filmmaker Brad Beesley's documentary. June's Red Earth is one of the country's biggest Native American pow-wows. Boley's 'black rodeo' over Memorial Day weekend is biggest on Tuesday night. El Reno, west of Oklahoma City, is the birthplace of the onion burger (where onions are grilled inside the meat patty) and in May the town flaunts its burger roots during its Fried Onion Burger Day festival.

Tragically, the McCalester State Penitentiary – a legend right out of that Richard Pryor/Gene Wilder film Stir Crazy – is suspended to state budget cuts.

Heavener, in the state's scenic southeast, claims to be the country's most southern and western Viking site. The runestone here, found in 1923, has cryptic carvings linked to Scandinavian tongues. (Or perhaps it was just drunken teens going wild?) I've not been yet, but I can dream.

Wonderful in fall, this hilly, leafy state park in southeastern Oklahoma features rock-climbing and rappelling spots around its sandstone cliffs and formations where Jesse James once hid away. There's a lodge, cabins and campsites.

This was a Reid family favorite spot for Thanksgiving meet-ups. Sometimes plugging in TV and Intellivision video games in the tent.

Everyone has a favorite statue. This 76-foot one of a hard-hatted oil guy with a derrick and a big 'Tulsa' belt buckle outside the fairgrounds on 21st Street in central Tulsa is mine. (Just don't tell any locals it's originally from Fort Worth, Texas.) Nearby Brownie's is a very greasy diner with long-time origins and all-you-can-drink root beer. Very old-school, right down to the sticky floors. 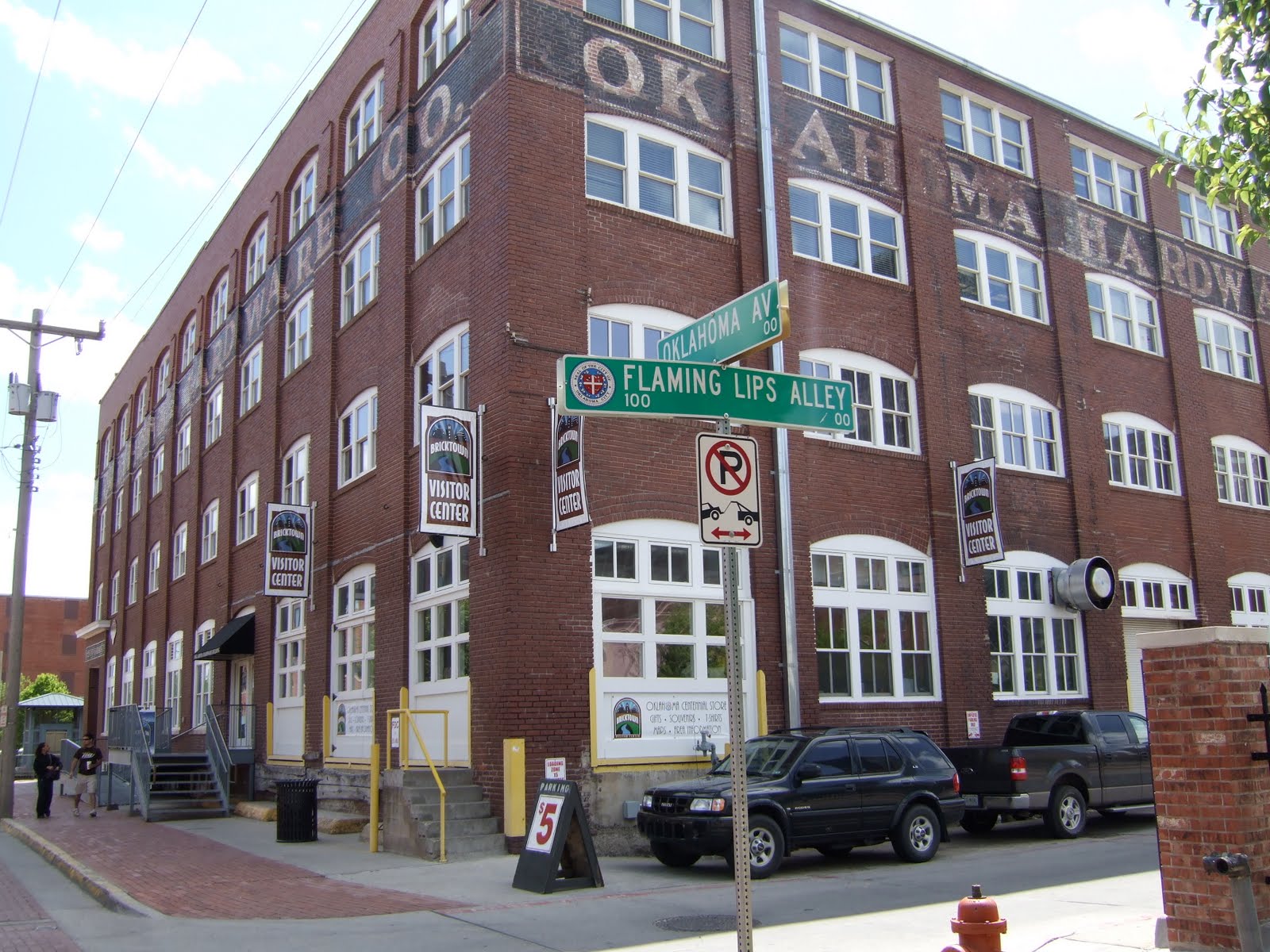 Perhaps no city has had a greater make-over in the past 15 years than Oklahoma City, a cow-town capital where the hills and free prairies of Oklahoma's east fades to the wide-open plains of the state's west. The art museum moved to an art-deco spot downtown, the painfully dome-less capitol got a dome, the Oklahoma River got water, and downtown's adjoining Bricktown has gradually transformed from a ghost town -- there's a bars and restaurants, a hokey canal boat tour, and a 'yacht club' on the river. Also here, just off the canal, is a wee high-five for hometown heroes, the Flaming Lips: Flaming Lips Alley.

They say you can't go home again. You can, just know that that your old school – like my old elementary school – might have become the Islamic Center of Tulsa.

The Texan/Oklahoma Mexican chain – some with the cute '80s-era adobe architecture in tact – is actually pretty good, and definitely the local preference over Taco Bell.

I can testify, from first-hand experience, that they really keep it clean in back. 'Bueno' was my first non-paperboy job. It didn't last long. I got fired for 'not smiling.' I washed dishes there for about five weeks.

The former Cowboy Hall of Fame, with a far more cumbersome name now, is one of the state's most-loved attractions: a ticker-tape parade to cowboy and cowgirl greatness. Don't miss the bit on Bill Pickett, the son of a former slave who created the 'bulldogging' (or 'steer wrestling') rodeo event of jumping off a horse and pulling a steer down by grabbing its horns and biting its lip. Bill Pickett: there's one tough cowboy.

Sure, luxurious Southern Hills gets the US Open from time to time (Tiger Woods once called Tulsa 'boring'; the man has zero travel skills), but this 36-hole public course is Tulsa's favorite. Particularly in summer for the lighted par-three course (just $13 to play).

Of course as kids we used to sneak on, then jump the fence on 51st St to get lemon fruit pies from a nearby Quick Trip. Other times we'd just go fish under the bridge here. Jay sometimes tossed little fish to flop on Yale Avenue till they got pancaked by passing Oldsmobiles. Seriously it was all Jay. I just watched.

In summer, be sure to get outdoors during the blazing heat of day. Stop, close your eyes, and listen to that swelling buzz. Locusts. That's the soundtrack of Oklahoma summer.

I have a theory that every human should be soaked by rainfall once a year. And Oklahoma is one of the best places on earth for it. If you can possible arrange a visit in spring, listen for the crackle of thunder – it's coming! Oklahoma's famously in 'Tornado Alley'; much of the a-ma-zing film Twister was shot here – and rush outdoors to let big fat cool raindrops soak you until you know what a thunderstorm tastes like. You won't forget it. Just get back inside to safety before the lightning (or brain-denting hail) starts.

Whenever Oklahoma Sooners' football team scores at home in Norman – and it happens often – a little cute schooner pulled by white ponies darts across the field, tributing the state's famed 1889 Land Run. It's cute and is yet another damning proof on why college football is vastly superior to professional football. (If you go, it's OK to wear neutral colors, but no Texan burnt orange; a few years ago a Texan fan had his testicles nearly ripped off by a church deacon Sooner fan.)

I love it when people try to say it's just a game.

But for the state's finest football moment? In 1927, the New York Giants won the US football NFL championship and were challenged by a rag-tag Native American team from Oklahoma's Osage County (some of their games began with the ball dropped on the field by a passing biplane, and ended with a tip jar passed around the stands). The big-city Giants arrived the day after Christmas and played a mostly Native American team at Pawhuska, the seat to Osage County – and lost, 13-6. (There's been talk of building a memorial in the town of Hominy.) 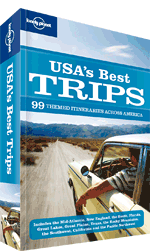 For more dream fodder for the Great American road trip, get Lonely Planet's USA Trips filled with themed itineraries of all lengths criss-crossing the US.