One-of-a-kind wildlife-watching in the Galápagos

Arriving in the Galápagos is thrilling – partly because the introduction to the archipelago is unsettling, even spooky, like setting foot on an unpopulated planet.

First, there’s the airplane’s slow descent over vast expanses of water and massive lava rock on to a lonely landing strip where’s there’s nothing to see but an ominous pair of dark frigate birds gliding overhead.

Then there’s your first hike on the islands’ sandy paths, where you practically stumble over glittering golden lizards and cartoonish blue-footed boobies who pay no attention to the parade of human beings in hiking boots. 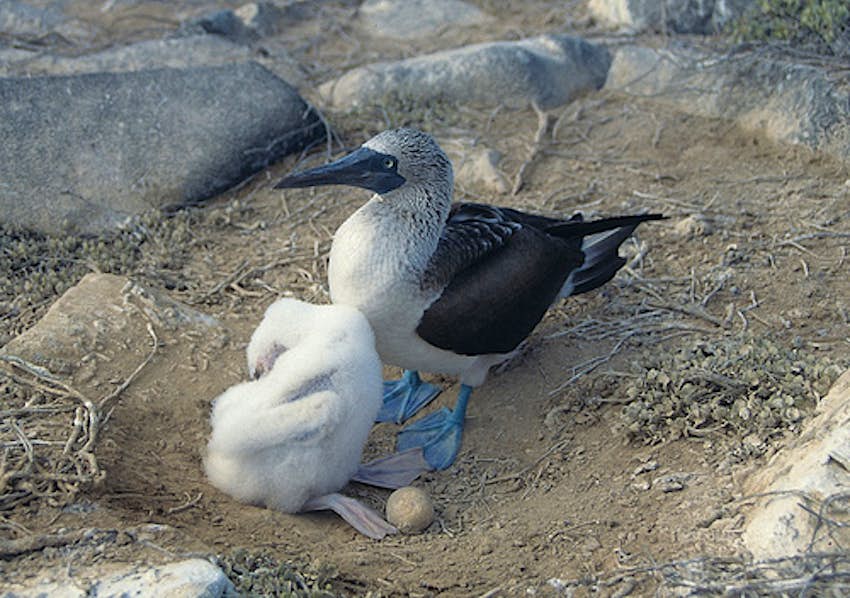 Later, outfitted in a wetsuit and snorkel gear, you’ll put your face in the chilly water for the first time, and be stunned by giant sea turtles floating beneath you, penguins zooming by, and tiny seahorses bobbing in rocky coves. Your heart pounds as a six-foot-long shark slinks by.

Back on the boat, travelling to the next island, the deep sea rolls and churns, and your body fills with adrenaline as you grasp the railing. The Galápagos, after all, are no island paradise – they’re brutal and breathtaking, a dramatic stage for some of the world’s most unusual wildlife.

What makes the Galápagos' ecosystem unique? It’s a complicated question that scores of scientific studies, books, films and field guides – notably Charles Darwin’s historic Origin of Species and the BBC’s Born of Fire documentary – have attempted to answer. 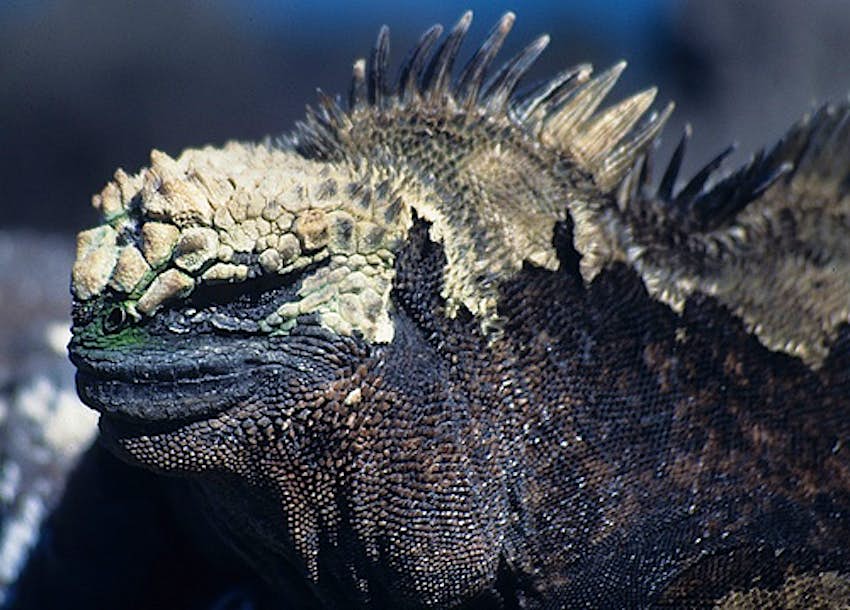 The archipelago’s remote location, 600 miles off the coast of Ecuador, means that the islands’ flora and fauna have been almost entirely isolated from the rest of the world for millions of years. Sadly, humans have played a major role in both the development and destruction of various species. Mountain goats, for instance, were carelessly introduced to the islands by human settlers; the animals later had to be rounded up and killed off because of the widespread damage they were causing to the archipelago’s delicate ecosystems.

Today, many of the islands' species lack natural predators – which explains why so many of the Galápagos’ animals seem unafraid of humans – and others are endangered due to uncontrolled immigration in the past two decades.

Perhaps even more intriguing than the archipelago’s social history is its location on a natural 'tectonic conveyor belt'. The island platform was formed by underwater volcanoes that continue to shape, build and, in turn, tear down the islands’ environments. The Galápagos, as the experts say, are in constant motion. The way they are today is different to how they were in the past, and different to how they’ll be in the future – the archipelago is merely a snapshot in time. 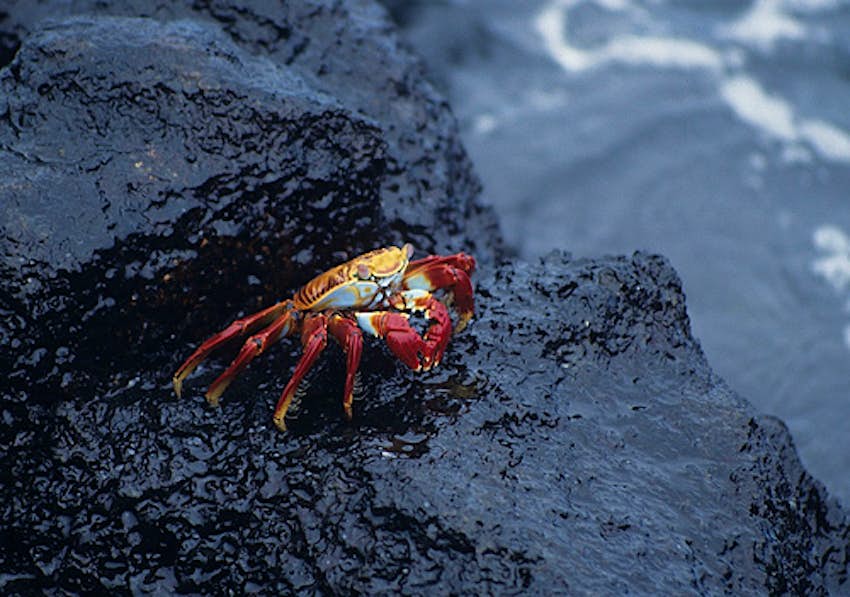 You heard it here: the Galápagos may be one of the only places you’ll ever go where you can hike around and swim with wild animals that won’t move away when you approach – or even react much to your presence at all.

On dry land, the star attractions include giant tortoises on the island of Santa Cruz (with life spans of up to 200 years, many will outlive you and your children and grandchildren – and even their children), Darwin finches, fluffy albatross chicks, colourful blue-footed and red-footed boobies, lava lizards, frigate birds and flightless cormorants who perch in low tree branches.

Underwater, the wildlife is even more spectacular: look for Galápagos penguins, sea turtles, graceful rays, blacktip reef sharks, fluorescent orange seahorses, a vast variety of bright tropical fish and even playful baby sea lions who like to interact with snorkellers in the water. Keep an eye on the horizon at sunrise and you might spot a killer whale.

If money’s no object, you can experience the Galápagos with world-class naturalists on board one of the eco-friendly yachts run by National Geographic Expeditions or similarly high-end outfitters.

But the islands aren’t off-limits to budget travellers. Contrary to popular belief, you can visit the Galápagos independently for an affordable price – if you have the time and patience to figure out the details yourself, and if you’re willing to travel outside the peak months of June-September and December-January. 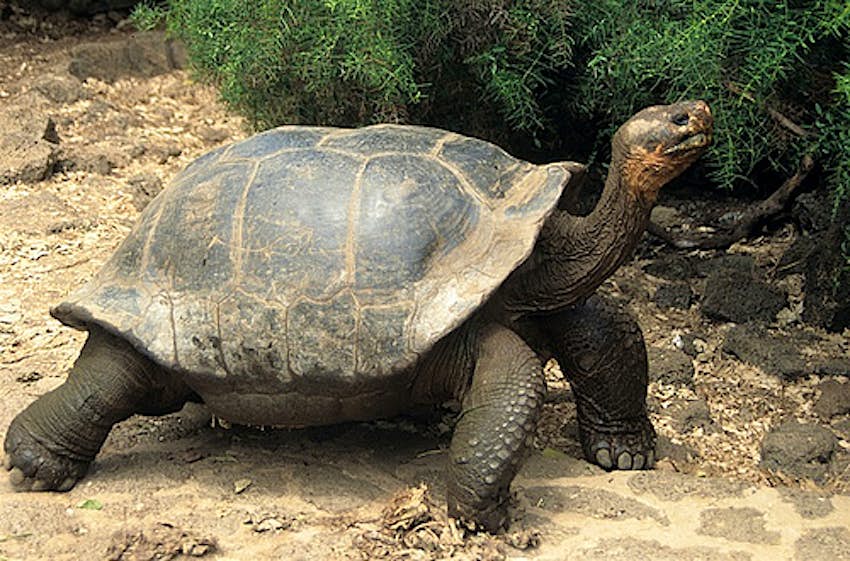 In addition to the park’s entrance fee (around US$110), the flights between Quito or Guayaquil and the islands will be one of the biggest costs. It’s worth your time to surf the web and ask around at travel agencies on the mainland to see who’s offering the best fares.

The backpacker hub in the islands is Puerto Ayora: there, you can find inexpensive eateries, decently priced supermarkets, hostel-style accommodations at Hotel Sir Francis Drake and small travel agencies selling basic last-minute cruises that take travellers out to the different islands for day trips or economical three-night cruises.

Don’t forget to stop by a tourist kiosk in the islands or on the mainland – the agents will be happy to make a list of free activities and exhibits in the Galápagos, from the Charles Darwin Research Station to El Chato Tortoise Reserve.

Safari in India: a manual for nature lovers