Off the beaten track in Borneo

From steaming jungle to the cloud-capped summit of Mt Kinabalu, Borneo’s natural wonders are undeniable. But the island is no longer the deserted paradise it once was.

Package tours and cheap flights from Southeast Asia have placed Borneo firmly on the tourist trail, and solitude is becoming hard to find; but with some effort and a sense of adventure, it’s still possible to discover the island’s secret corners.

This pocket of wilderness is one of the last areas of untouched jungle left in Malaysian Borneo. Covering 390 square kilometres, the Maliau Basin (www.maliaubasin.my) was discovered by chance in 1947 by a British pilot, who noticed its outline while flying overhead. Ringed by rock walls and dense forest, it’s justifiably been nicknamed ‘Borneo’s Lost World’. Amazingly, the first scientific expedition wasn’t undertaken until 1987. 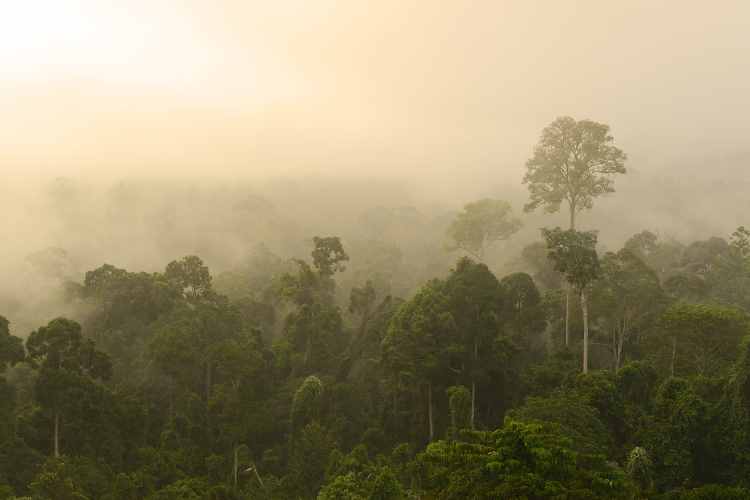 A misty sunrise over the jungle of the Maliau Basin, sometimes known as Borneo's 'lost world'. Image by Oliver Berry / Lonely Planet.

Maliau’s biodiversity is astonishing. It contains around 38% of the island’s species, ranging from gigantic seraya trees to critically endangered animals like clouded leopards and Sumatran rhinos. Now protected as a nature reserve, Maliau is reassuringly hard to reach: it takes two hours' off-road driving to the nearest road, another five hours’ drive to the nearest city, Kota Kinabalu – although the ominous logging roads encircling the basin’s edge suggest its isolation could soon be a thing of the past.

Several basic camps are maintained around the basin’s jungled interior, linked by rough trails and equipped with minimal facilities (hammocks, tarpaulins, camping stoves and not much else). There’s an upside to the discomfort, though: camping in the jungle enables you to explore areas most people never see, especially the basin’s spectacular waterfalls. Just be sure to pack some leech socks; you’ll be needing them. 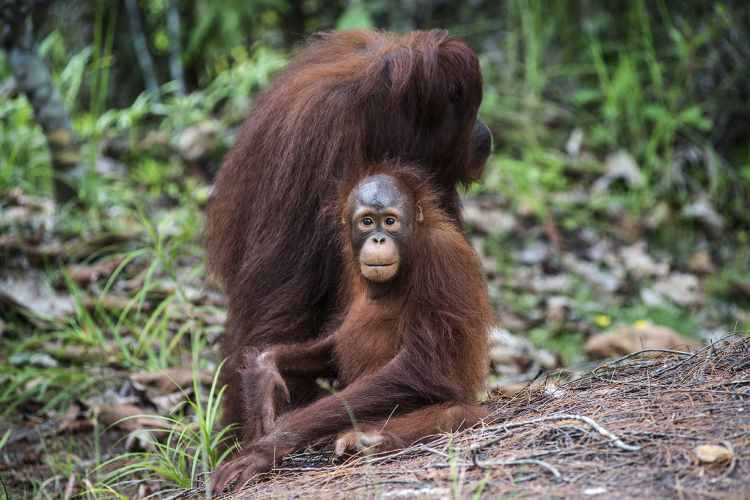 Orang-utan reserves such as Sepilok and Semenggoh (www.sarawakforestry.com) allow everyone to catch sight of Borneo’s most famous animal, but glimpsing orang-utans in the wild isn’t nearly as easy. They’re notoriously shy and avoid human contact as much as possible, so your best option is to head for the riverbanks of Tanjung Puting National Park (www.orangutan.org/rainforest/tanjung-puting-national-park), perhaps the best place in the world to see orang-utans in their natural habitat.

Situated in Central Kalimantan on the Indonesian side of the island and covering 415,000 hectares, Tanjing Puting began as Indonesia’s first orang-utan rehabilitation centre, but the highlight of a visit here is the opportunity to climb aboard a klotok (houseboat) and float down the Sungai Sekonyer river for a few days’ wildlife watching.

These traditional vessels serve as accommodation, river transport and mobile restaurant. Guests sleep on deck sheltered under mosquito nets, lulled to sleep by the hoots of the forest’s inhabitants. It’s like floating into the pages of Heart of Darkness.

Even from a klotok, you’ll need luck and a guide to find a wild orang-utan nest, but there are many other exotic species to spot: gibbons, hornbills, sambar deer, flying squirrels and crocodiles, as well as Borneo’s weirdest inhabitant, the proboscis monkey, identifiable thanks to its pot-belly and bulbous nose. 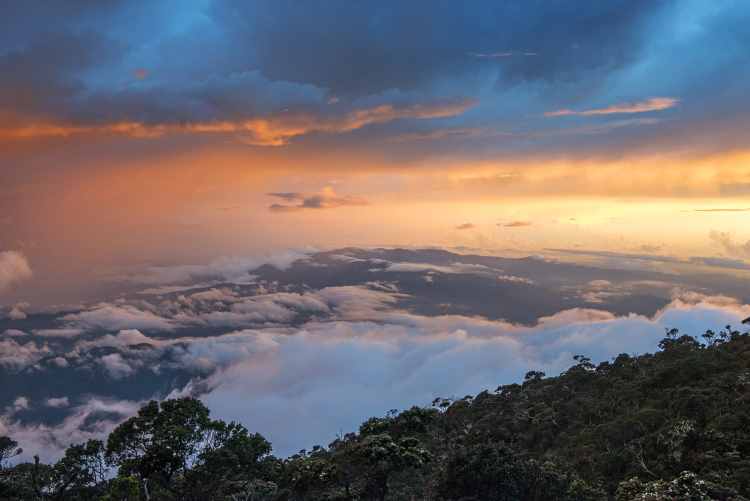 View over the lowlands of northern Borneo, seen from the slopes of Mt Kinabalu. Image by Oliver Berry / Lonely Planet.

Tucked away in eastern Sarawak, the Kelabit Highlands are ideal for some warm-up trekking before you tackle Borneo’s main mountain, Mt Kinabalu. Inhabited by the Kelabit tribe, these remote uplands receive far fewer visitors than other areas of Borneo, so they’re perfect for peaceful hiking.

The main hub is the small village of Bario. From here, trails wind out across the hills to the area’s settlements, where most people still live in longhouses, making a living by farming fruit, vegetables and the special variety of Bario rice. The Kelabit people are famous for their hospitality, so you should be able to arrange a longhouse visit through one of the lodges in Bario such as Ngimat Ayu House or De Plateau Lodge.

For longer treks, several guides offer their services in Bario: count on around RM150 per day, more if you need a porter. Most of the area’s trails are extremely remote and often blanketed in cloud, so it’s definitely not a good idea to hike solo. 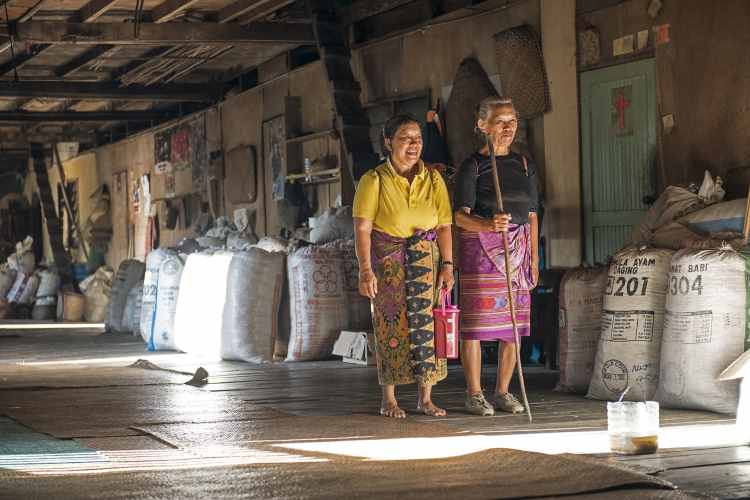 Borneo has many beautiful islands, including the resorts of the Tunku Abdul Rahman Marine Park and the coral reefs of Tun Sakaran Marine Park (www.sabahparks.org.my) and Pulau Sipadan. For island isolation you’ll need to do a bit more work and catch a boat to the Sangalaki Archipelago, a span of secluded islands that feel like stepping back into Borneo’s past.

Most boats from the mainland town of Berau arrive at Pulau Derawan, where you’ll find most of the accommodation and facilities (although even here, there are no cars and electricity still shuts off from dawn to dusk). Other islands such as Maratua and Kakaban can only be reached by chartering a local boat, or catching one of the infrequent inter-island ‘ferries’. Accommodation is mainly in local homestays, although there’s also a flashy hotel, Nabucco Island.

Apart from the laid-back lifestyle, the main reason to visit is for the underwater scenery: hawksbill turtles, pygmy seahorse, green turtles, hammerhead sharks and manta rays are all regular visitors. Sadly, dynamite fishing has decimated sections of the reefs, but recent conservation efforts have reduced the practice and protected the natural egg-laying grounds of the local turtle population. Maratua and Kakaban have another curiosity lurking in their lagoons: a jellyfish which has lost its ability to sting. 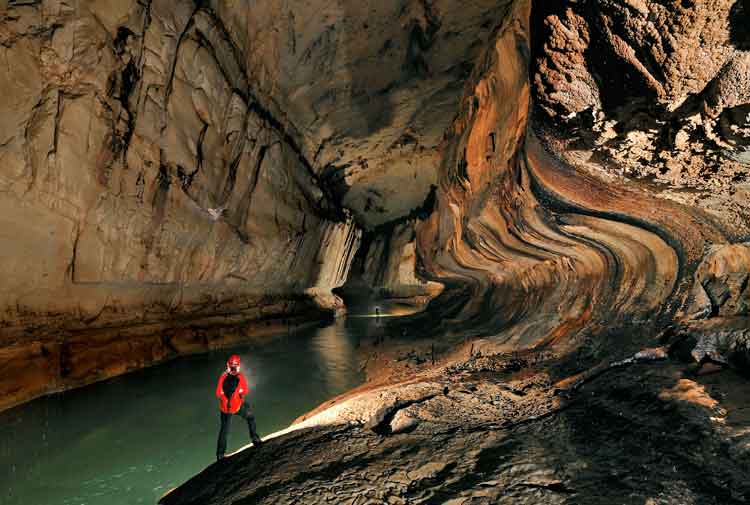 High in the hills of northern Sarawak, Gunung Mulu is home to Borneo’s most extensive cave systems. Thousands of caverns have been carved out by natural erosion from the underlying limestone, including the magnificent Sarawak Chamber, the largest cave ever found.

Four of the main caves are open to the general public, but park rules mean you have to employ the services of an official guide to visit them. The chambers and stalactite galleries of Deer Cave and Lang’s Cave are usually visited together, as are Wind Cave and Clearwater Cave, where the visit also includes a memorable boat trip along an underground river. Around 10 further caves can be explored, ranging in depth and difficulty: the trek to Sarawak Chamber is the most arduous of all, involving a three-hour trek just to reach the cave entrance. It’s worth the effort: guides like to claim that the cavern is large enough to hold ten Boeing 747s laid end-to-end. 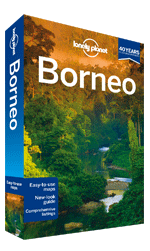 Grab your mozzie repellent and lace up those leech-proof socks! It's time to plunge into the humid heart of the Bornean jungle... with a little help from Lonely Planet's Borneo travel guide. And whether you prefer luxury resorts or remote eco-lodges, you'll find the perfect place to rest up at one of Lonely Planet's hotels and hostels in Borneo.