Easter Island, a tiny speck in the Pacific Ocean, is known the world over for its stone statues. Let these solemn entities draw you to the annual Tapati Rapa Nui, a vibrant festival celebrating the island’s Polynesian culture, with this guide from Lonely Planet Magazine.

The rules for the Haka Pei, the most eagerly anticipated event in the annual Tapati Rapa Nui festival, are simple: stand naked but for a loincloth at the top of a 300m-tall volcano, hold on to two banana tree-trunks lashed together with twine and launch yourself feet-first downhill, reaching speeds of 50mph before skidding to a halt in front of a whooping crowd. 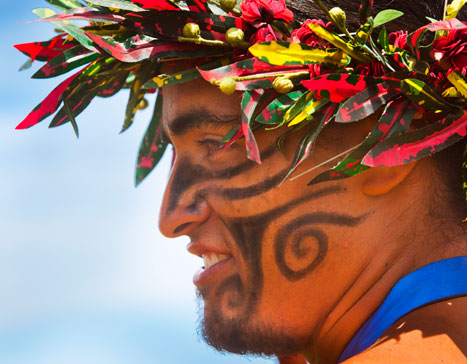 In the build-up, spectators laid out picnic blankets and coolboxes in any patches of shade they could find, ready for a day’s entertainment. As a traditional feast got under way, with festival organisers baking enough fish to feed 1500, a makeshift community sprang up: an accordion band played under a gazebo, families sold empanadas, Corona and Sprite from the back of their Jeeps, and kids played Polynesian pop music through portable speakers.

At the foot of Maunga Pui, the Tapati games continued. Competitors threw long spears at a distant post, each strike greeted with wild drumming, dancing and cheers from the crowd. Set back from the hubbub, a green tent stood out against the brightest of blue skies. Men and women came and went, carrying tools or munching on slices of watermelon.

The miracle that there is a local population to celebrate here at all becomes clear from the top of Maunga Pu. From here, the island stretches out. Ludicrously bright green hills roll down to the rocky coast - and beyond that, nothing but the endless ocean and the curve of the horizon. There is no other land mass for 1200 miles. Chile, of which Easter Island is a territory, is 2300 miles to the east. How this tiny dot in the middle of the South Pacific came to be inhabited is the subject of some debate, but the most widely accepted theory is that Polynesian seafarers arrived from the west around 400 AD, perhaps from their nearest neighbour, the Pitcairn Islands. Skilled navigators, they plotted their course by the stars, ocean and clouds, at a time when god-fearing Europeans still believed that the Earth was flat and they might fall off it if they sailed too far.

Remnants of the Polynesians’ early presence are found all over the island, from stone towers once used by priests to chart the stars, to ancient superstitions that persist in the local psyche. Yet their most enduring legacy - one that brings 85,000 tourists a year to the most remote inhabited island on the planet, are the moai. These stone heads, with heavy brows and brooding expressions, are familiar to people the world over despite the fact that few could place Easter Island on a map. 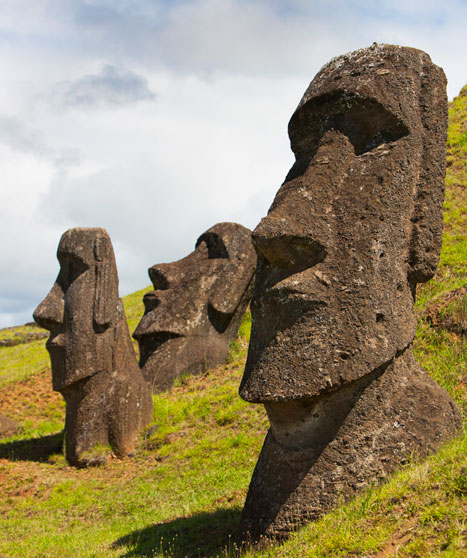 Indeed, for a time, they were more coveted overseas than locally: with the arrival of Catholicism in the 19th century, the moais’ spiritual significance waned and they were happily sold to passing whalers, explorers and tourists. London’s British Museum has its own stone head - the Hoa Hakananai’a was picked up by the British Navy on a surveying trip in 1868. Hakananai’a once presided over the sacred village of Orongo.

Many of Easter Island’s 887 moai were originally carved out of the soft rock found at the Rano Raraku quarry to the east of Orongo. Today, it is a kind of moai graveyard, with stone heads poking out of the ground at sheer angles and toppled bodies lying higgledy-piggledy on grassy slopes. The biggest rises over 20 metres tall. A nose or stiff eyebrow gradually appears in an apparently featureless wall of rock, testament to the work that took place here from the 14th century onwards. While the practice at Ranu Raraku is to leave the statues where they lie, other sites have been restored to approximations of their former glory. On a windswept bay in the shadow of the quarry, a stone platform, or ahu, holds 15 moai, resurrected in the 1990s. As elsewhere, the moai here at Tongariki are a visible demonstration of the power of each tribe, representing the spirit, and perhaps also the physical likeness, of their ancestors. 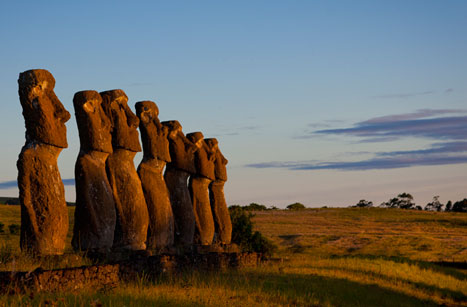 The seven moai at Ahy Akivi face out towards the Pacific rather than inland. Photo by Eric Lafforgue

In the soft evening light, the track leading up to the site glows orange from dust kicked up by passing cows. Shadows sidle down the hillsides, folding small farmsteads and rows of eucalyptus trees into darkness as they edge towards the ocean. The moai stand silently watching the sky, as they have done for centuries. 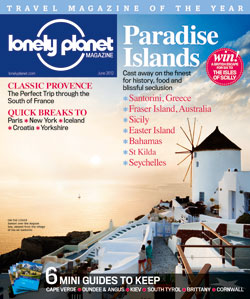 This is an excerpt from a longer article by Amanda Canning, first published in Lonely Planet Magazine.