Madagascar's wondrous wildlife (and where to see it)

Madagascar is well-known for its biodiversity; 5% of all animal and plant species known to man live here and only here (70% of the fauna and 90% of the flora are endemic). For travellers, admiring this modern-day Noah’s Ark is a highlight of a trip to the Red Island.

Fortunately, there are plenty of opportunities to do so. Despite some tough times since the political turmoil of 2009, notably with the spike in rosewood trafficking, Madagascar’s national parks remain excellent, with knowledgeable guides and good infrastructure for visitors; part of the park fees also help fund community projects.

The Malagasies are also increasingly aware of the value - both scientific and economical - of their unique environment, so the prospects are good. If you decide to visit, here are 10 of our wildlife highlights and the best time and place to find them.

It’s very likely you’ll hear this lemur before you see it. Madagascar’s largest lemur, the indri is well-known for its distinctive song, which can travel up to 3km in the forest and which the animals use to keep rivals at bay. Indris are tree-dwellers and can leap up to 10m with surprising grace. Like many lemurs, they were hunted for years and are now one of Madagascar’s many endangered species. Your best chance to see (or hear) them is at Parc National d’Andasibe, early in the morning.

Every year over the winter months (July to September), humpback whales leave their feeding grounds in the cold waters of the Antarctic to mate and give birth in the warmer waters of the Indian Ocean. Humpbacks are best known for their spectacular breaching, part of their courtship ritual. Ile Sainte Marie and the Baie d’Antongil are Madagascar’s whale-watching hotspots, but the animals can be observed off Fort Dauphin, Tuléar and Nosy Be, too.

With unkempt hair, oversized ears and its dexterous ‘magic digit’ (middle finger, used to echolocate and extract food), the aye-aye is a strange-looking animal. It was long thought to be a bad omen and was extensively hunted as a result; although the animal is now protected, aye-ayes are still the subject of superstition. For your chance to see this reclusive nocturnal lemur, join a night walk on the aptly named Aye-Aye Island on Madagascar’s east coast.

The Brookesia chameleon is the world’s smallest chameleon: at just 2cm, it will fit on the tip of your thumb, but good luck trying to spot it! The diminutive reptile lives in leaf litter and is perfectly camouflaged thanks to its brown, bark-like skin. Guides at Parc National de la Montagne d’Ambre have an uncanny ability to spot it.

For many, ring-tailed lemurs are the archetypal lemur, with fluffy coat, bushy tail, expressive eyes and big family groups. Ring-tailed lemurs spend much time on the ground and are therefore easy to observe. They have also adapted to a variety of habitats and seem just as comfortable in the spiny forests of the south as in the canyons of Parc National de l’Isalo.

The western coast of Madagascar is a favourite feeding and nesting site of marine turtles. Five species regularly ply the coast - green turtle, Hawksbill, loggerhead, Olive Ridley and leatherback - but it is the first two that are most common around Nosy Tanikely, a small marine reserve off the island of Nosy Be. Snorkellers and divers are regularly graced by their presence, and every year a lucky few also witness turtles nesting or hatching on beaches along the nearby islands of Nosy Iranja and Nosy Sakatia.

Few images evoke Madagascar more than this stretch of the RN5 in the south-west of the country. Flanked by majestic baobabs, it comes into its own at sunrise or sunset, when the trees cast their long shadows on the red dust road and neighbouring paddy fields. Baobabs can store water in their trunks and thrive across Madagascar’s arid south.

There are nearly 1000 species of orchids in Madagascar (and counting), 90% of which are endemic. Many are very rare, with short flowering season, and it is this ephemeral beauty that makes seeing wild orchids so special. Orchids are most common in the humid forests of the eastern seaboard such as Parc National de Ranomafana.

There is something very special about places where the rainforest meets the sea, and the Masoala Peninsula is one such place: think lemurs and whales in the same day. Scientists estimate that a staggering 1% of the Earth’s biodiversity is found in the peninsula’s pristine rainforest and coastal waters, an area protected by Parc National de Masoala, three marine national parks and the soon-to-be Parc National de Makira.

A strangely elongated, puma-like creature (it’s actually a mongoose), the fosa is Madagascar’s biggest predator (and the baddy in the animated film Madagascar). It hunts lemurs, rodents, birds and reptiles and is well-known for its amorous displays during the mating season (Oct-Nov). One of the few places where it is reliably spotted is Réserve Forestière de Kirindy in western Madagascar. 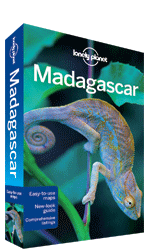 Ready to hunt for more weird and wonderful fauna and flora in one of the world's greatest wildlife hotspots? Every spotter needs a copy of Lonely Planet's Madagascar travel guide.