Sandy bliss awaits travellers off Cambodia’s south coast. Whether you favour being glued to a hammock upon an isolated shore, or fancy slothful days recovering from all-night raves, Cambodia has an island for you.

Lapped by the lapis-hued waters of the Gulf of Thailand, the scattering of islands in Cambodia’s south have hugely diverse beach scenes. But all come with a jungle-clad interior, swaths of sand, and the nightly magic of bioluminescent plankton. Nearly all are also shadowed by the cloud of future big development – the time to go is now.

On Koh Rong Sanloem, the wide sweep of sheltered Saracen Bay just might be the perfect beach idyll. At least 12 (with more on the way) small-scale bungalow resorts, built of wood and palm thatch, sit in harmony with the dense jungle that hugs the shore. Intimate Cita Resort has two-tiered bungalows with open-air bathrooms and hammock porches, while the bungalows of Secret Paradise exude an effortless beach-casual glamour.

For a more secluded getaway feel, head to the island’s west for sand-between-your-toes living. Koh Rong Sanloem’s oldest resort is Lazy Beach, a hideaway (on the beach of the same name) all about hammock-swinging and sunset cocktails. Further north is Sunset Beach, with just a couple of simple places on the sand.

Koh Rong Sanloem’s beach scene is often pricier than other islands, but Saracen Bay does have a couple of excellent budget options (including the stilted open-air dorm at The Beach Resort). For something completely different, intrepid travellers can make a beeline to M’Pai Bay on the island’s northern tip, where a clutch of wallet-friendly basic digs (check out Easy Tiger and the Chill Inn) has opened up within the friendly fishing village. Don’t expect gorgeous sweeps of white sand here – this is more a beach break with a true local vibe.

The now-fabled party stop among backpackers doing the southeast Asia loop, Koh Rong is a tale of two halves. There’s the Koh Tuch village area, where all the action happens; and then there’s the rest of the island, which, despite development plans, remains almost untouched except for a handful of remote resorts and a couple of itsy-bitsy fishing villages. Even Koh Tuch Beach itself is long enough to provide a sense of solitude. Make for Treehouse Bungalows on the headland to escape the crowds. If it’s dance-to-dawn parties and Mekong whisky buckets you’re after, though, the rudimentary crash pads of Koh Tuch village are where it’s at – just don’t expect to get much sleep.

During daylight hours, the more active can exercise their primate instincts by swinging through the treetops at High Point Rope Adventure. But aptly named Long Beach is the real island highlight, meandering for a good 7km along the island’s western shore. During the day, half of Koh Rong sets out for boat trips to Long Beach, offloading at this sweep of soft sand for swimming, sunbathing and fishing fun.

Koh Ta Kiev: back to basics

Tired of older travellers talking about the good old days of southeast Asia’s rustic island living? Put Koh Ta Kiev on your radar; it may just be the chance to grab that experience yourself. Only a handful of budget resorts straddle the west and southwest shorelines, with opportunities to doss in hammocks or under canvas, as well as dorm and basic hut options. Ten 103 (facebook.com/Ten103-Treehouse-Bay) and The Last Point are two of the best for seriously back-to-basics communal beach-bum life.

The fingerprints of big development are fast appearing here, with a road sliced through the thick jungle interior to service a planned luxury resort on the north shore. Actual construction seems to have been put on the backburner for the time being. Nevertheless, if you want to sample an old-school-style sandy haven, the best advice is to get here sooner rather than later.

If the profusion of bungalow pads on other islands is causing a decision-making meltdown, why not limit the search to an island where there’s no choice. Flanked by mangrove forests, the almost uninhabited island of Koh Thmei sits off Ream National Park, with just intimate, ecologically minded Koh Thmei Resort (koh-thmei-resort.com) gracing the shore. This is a stellar island option for nature fiends – the beach is littered with exotic shells, there’s a coral reef for snorkelling just offshore, and the jungle interior is home to more than a hundred species of birds.

Blink-and-you’ll-miss-it Koh Totang, in the Koh Sdach Archipelago, is castaway cool with serious eco credentials. The island’s solo resort, Nomads Land (nomadslandcambodia.com), sits in splendid isolation upon the shore and flies the flag for sustainable chic. The five quirky and colourful bungalows are a bohemian beachcomber’s dream, strung with hammocks and plentiful cosy deck corners for chilling out – yet solar power provides electricity, drinking water comes from stored rainwater, and bathrooms have composting toilets and bucket showers. Nomads Land proves that you don’t have to sacrifice style to live life off the grid.

Ferries depart for both Koh Rong’s Koh Tuch Beach and Koh Rong Sanloem’s Saracen Bay and M’Pai Bay at least three times daily (schedules change seasonally) from Sihanoukville, with journey time under an hour. For everywhere else, you need to take private boats provided by the resorts.

November to March is high season, with the peak period in December and January, when places fill up fast and prices are at their highest. From June the rains descend, but if you don’t mind contemplating storm clouds brewing on the horizon from your porch, you get the bonus of snagging a bungalow bargain.

Don’t forget your island essentials: enough cash to last (none of the islands have banks or ATMs), sunscreen, insect repellent for the fiendishly fierce sandflies, and a torch (flashlight).

This article was first written by Lina Goldberg and published in June 2012, then updated by Jessica Lee in January 2016. 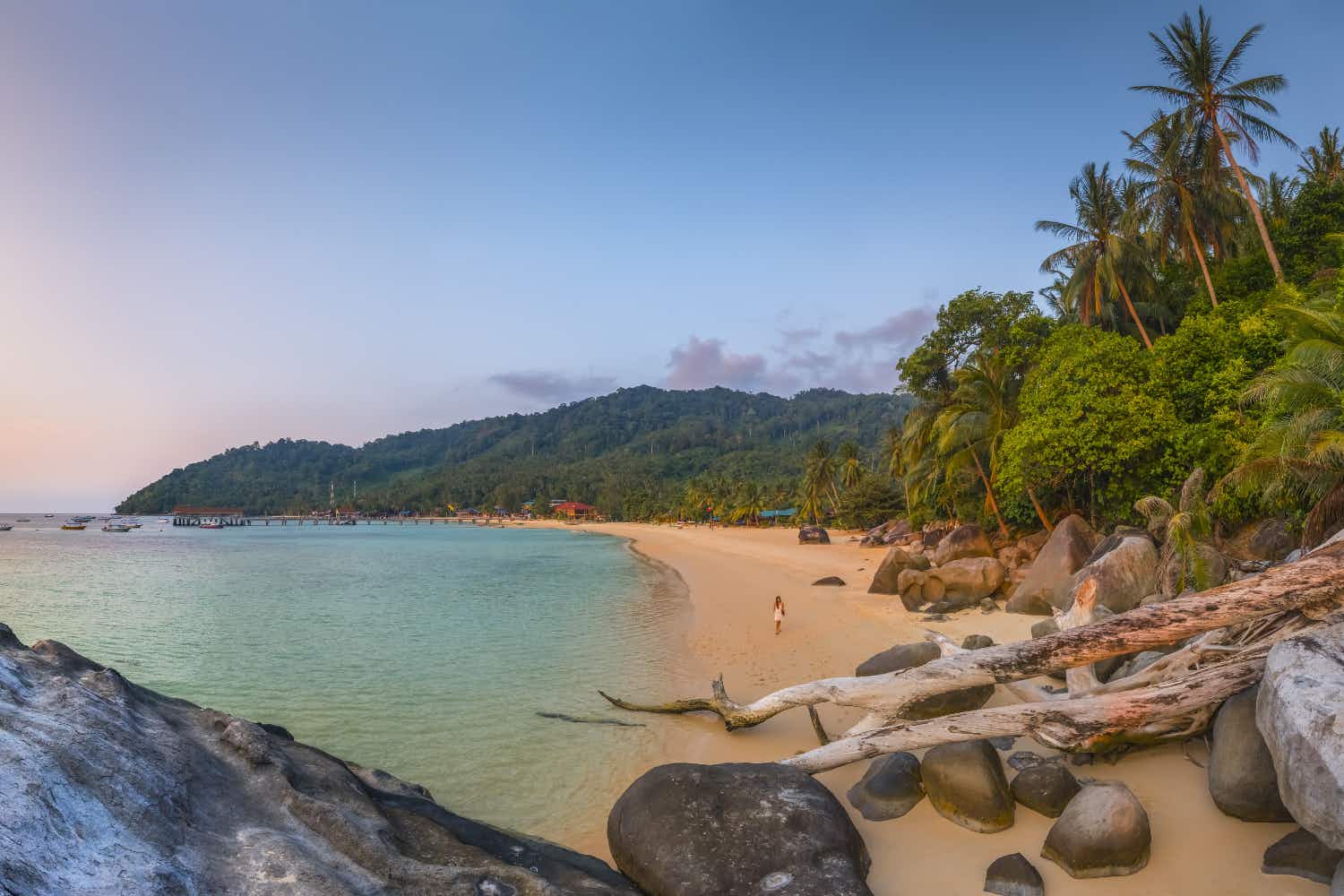 Escape to Tioman: where to get wet and wild on… 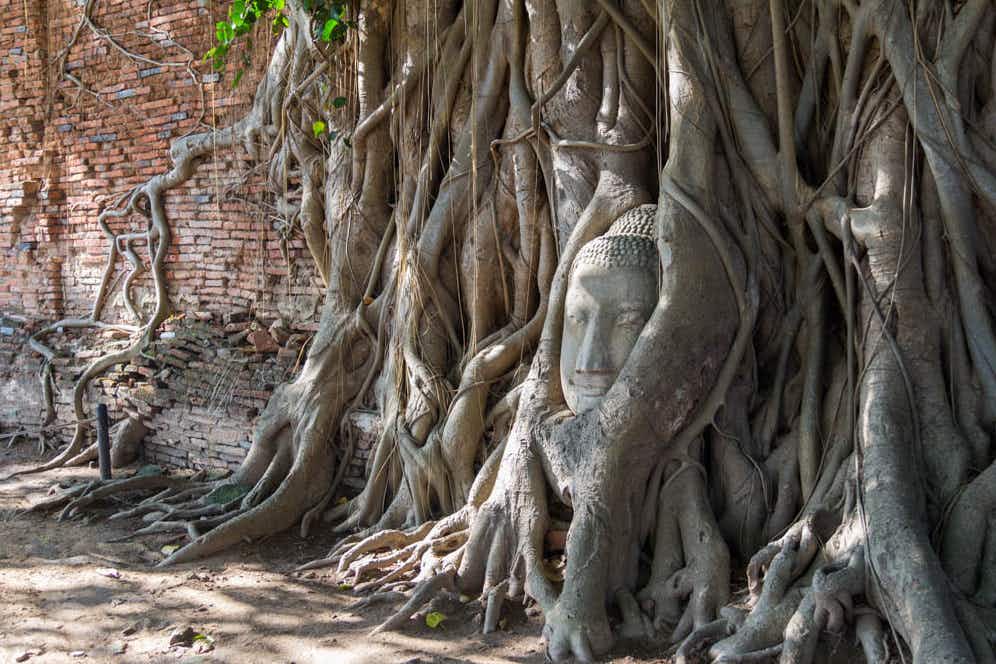 A tale of two Thai cities: how to visit Ayuthaya…