Get your trunks on: the world's best public swimming pools

Whether it’s for the exercise, a cooling dip as temperatures soar, or just the sheer fun of splashing around, the following selection of public pools dotted around the globe offer not only memorable settings, but also convenient access to highlights for tourists, making it easy to combine your swim with some classic sightseeing. 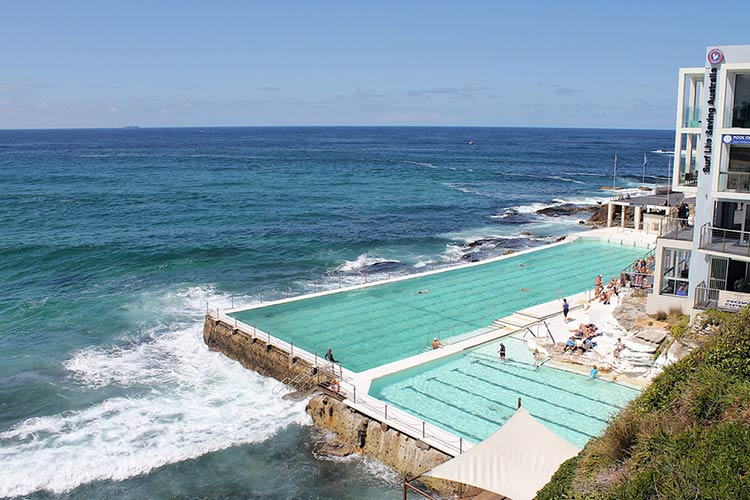 Outdoor swimmers are spoiled for choice in Sydney. Enjoy a day hopping in and out of pools across the city, starting with North Sydney Olympic Pool (northsydney.nsw.gov.au/Recreation_Facilities) directly beneath Sydney Harbour Bridge, moving on to the Andrew Boy Charlton Pool (abcpool.org), across the harbour, then the newly revamped Prince Alfred Park Pool (princealfred.org), before finishing with a late afternoon dip at Bondi Icebergs (icebergs.com.au)

Nearby: If walking across Sydney Harbour Bridge seems too tame, there’s always the Bridge Climb (bridgeclimb.com); Boy Charlton Pool is handy for the gorgeous Botanical Gardens & Domain (rbgsyd.nsw.gov.au); Prince Alfred Park Pool puts you in pole position for the hip bars, cafes and restaurants of Surry Hills; while Icebergs is perfect for Bondi Beach as well as the grand cliff edge walk to Coogee.

Edinburgh’s 50m-long 'Commie Pool' (edinburghleisure.co.uk/venues/royal-commonwealth-pool), built for the 1970 Commonwealth Games in the city, will again be put into service for the diving events of this year’s Glasgow-based games. The building is also considered one of Scotland’s top 100 modern examples of architecture.

Nearby: Hike to the 251m summit of Arthur’s Seat (scottishsport.co.uk/walking/arthurseat.htm), the remnants of a long-extinct volcano and the highest point in Holyrood Park (historic-scotland.gov.uk). This former royal hunting ground is a slice of natural wilderness amid the city with crags, moorland and even a loch. 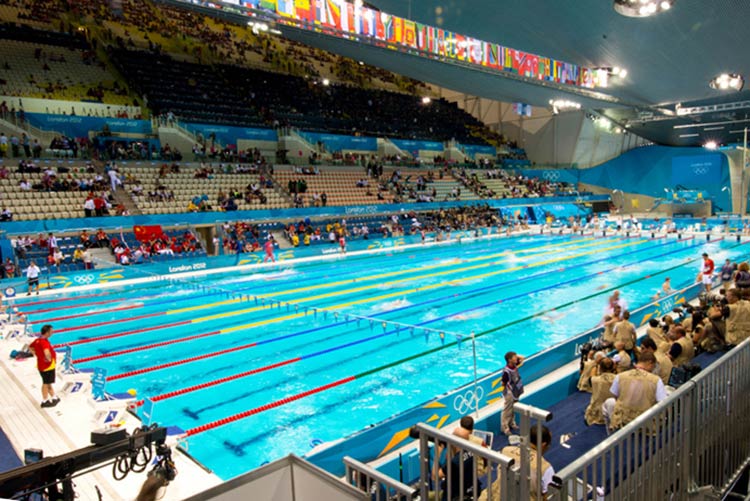 Effortlessly winning an architectural gold medal at London's 2012 Olympic Games, the Zaha Hadid-designed Aquatics Centre (queenelizabetholympicpark.co.uk) is now open to the public. Go online to book your swim, which can be either in the 50m competition pool under the wave-like roof, or in the twin 25m training pools.

Nearby: The impressive Queen Elizabeth Olympic Park has many art works incorporated into its design, including the swoopy, swirly Arcelormittal Orbit (queenelizabetholympicpark.co.uk). At 114.5m, the UK’s tallest sculpture provides sweeping panoramas and freaky inverted mirror effects from its viewing gallery.

The open-air Bains de Paquis (bains-des-paquis.ch) not only provide opportunities for sunbathing and a refreshing dip in the sparkling waters of Lake Geneva, but are also a social hub for locals, who come to enjoy an alfresco drink or snack, indulge in a massage or sweat in the hammam. A serene way to start the day is by attending the 6am concerts held at the pools between 19 July and 1 September – admission is free and coffee is complimentary.

Nearby: The baths provide a ring-side view of the Jet d’Eau which shoots a plum of water 140m into the air from the lake. Also beside the lake is the Jardin Anglais with its flower clock. 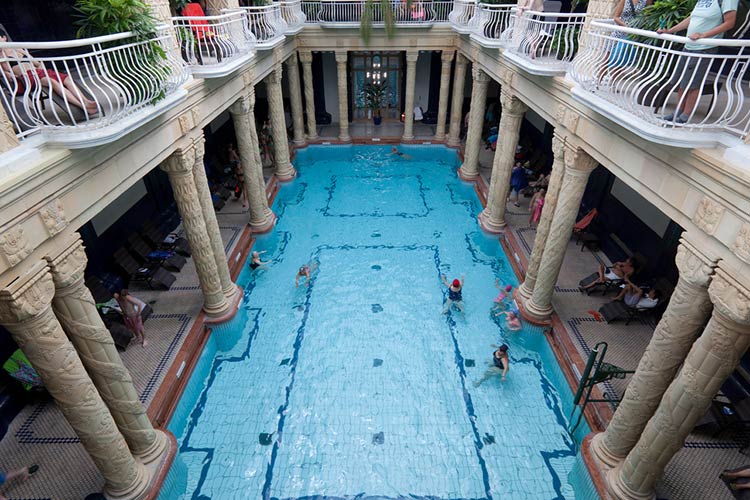 If the thought of lake swimming has you shivering, then ease yourself into the thermally heated bliss of the Gellert Baths (gellertbath.hu) in Budapest. Hungarians were taking to the natural waters here for centuries before the grand secession-styled hotel and bathing complex opened in 1918. There are both indoor and outdoor swimming and sitting pools.

Nearby: Various exhibitions, a restaurant and sweeping views of Budapest can be enjoyed in and around the ramparts of the Citadella Fortress (citadella.hu) built in the 1850s.

Escape the steamy, tropical heat of Kuala Lumpur at this outdoor waterpark (sunwaylagoon.com) crafted out of a former tin quarry. It offers plenty of water slides and the world's largest artificial surf beach.

Nearby: Fully air-conditioned is the neighbouring, Egyptian-themed shopping mall Sunway Pyramid (sunwaypyramid.com) with giant lions standing guard by the main entrance, and an ice skating rink. 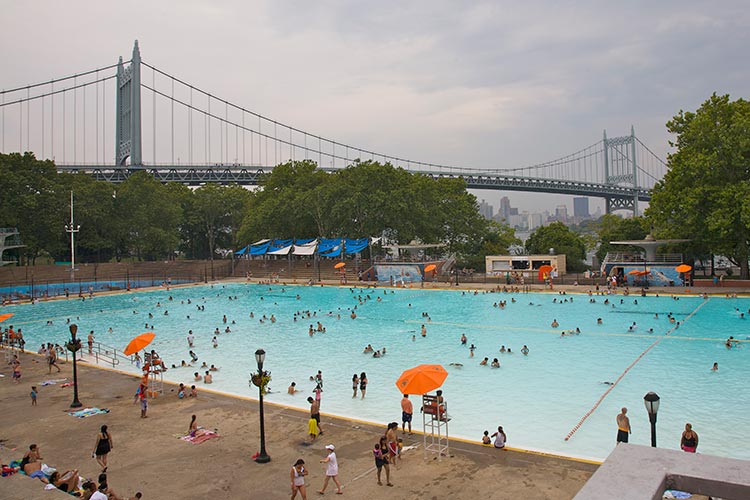 The Big Apple’s clutch of open-air pools in parks kick into action from late June to 1 September. The oldest and largest is at Astoria Park (nycgovparks.org), while the pop-up pool at Brooklyn Bridge Park (brooklynbridgepark.org/events) is handier for downtown Manhattan and great for kids.

Nearby: If you’re in Queens, check out the Noguchi Museum (noguchi.org) in the former sculpture studio of the artist Isamu Noguchi, or the entertaining Museum of the Moving Image (movingimage.us). Brooklyn Bridge Park nestles below the suspension bridge – which you should not miss walking across – and is home to the wonderful, fairytale-like Jane’s Carousel (janescarousel.com).

Good for year-round swimming is this 1.2 hectare, 300m pool (austintexas.gov/department/barton-springs-pool) in Zilker Park fed by natural spring water at an average temperature of 21C. It’s said that a five-year-old Robert Redford learned to swim here. 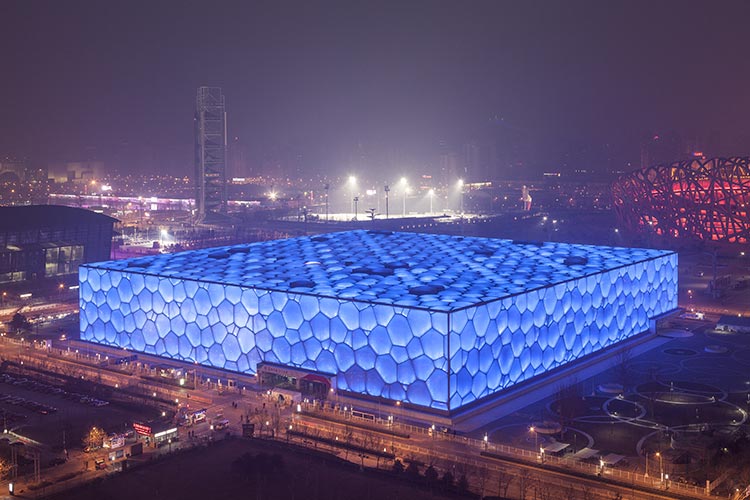 The former venue of the 2008 Summer Olympics in Beijing has been reinvented as a waterpark. Image by Eric Gregory Powell / Photolibrary / Getty Images

One of the most distinctive venues of the 2008 Summer Olympics, this giant building ,which looks as if it is covered in bubble wrap, has been transformed into Asia’s largest indoor waterpark (waterpark-watercube.com/English) with a variety of water slides and splash pools. Be spun around on the Tornado, shoot down the Bulletbowl, imagine you’re in the ocean in the wave pool, or gently float in an inflatable ring down the Lazy River.

Nearby: Another legacy of the Beijing Olympics is the National Stadium (n-s.cn), aka the Bird’s Nest, reputed to be the world’s largest steel structure.

Cape Town is blessed with Sea Point Pavilion (capetown.gov.za/en/SportRecreation/Pages/SeaPointSwimmingPool.aspx), a beautiful art deco outdoor pool complex; crucially the water here is always at least 10C warmer than that of the frigid Atlantic Ocean. Should you prefer the seawater, then it’s slightly warmer in the natural tidal rock pools facing on to False Bay, such as those at St James or Kalk Bay.

Nearby: Shooting up from Sea Point is Table Mountain. Hike up or ride the cable car for awesome views from the summit of this rocky natural icon.