Christchurch revival: why New Zealand's comeback city is a must-see for 2013

What a difference a year makes. Late last year, Lonely Planet was on the ground in Christchurch uncovering new restaurants, cafes, bars and attractions in the quake-damaged city. (See the resulting chapter here, free for one more month.) Now, our shiny new guidebook to New Zealand is in bookshops – and Christchurch's remarkable recovery has progressed to the point that we’re naming the city as one of the top 10 cities to travel to in 2013. 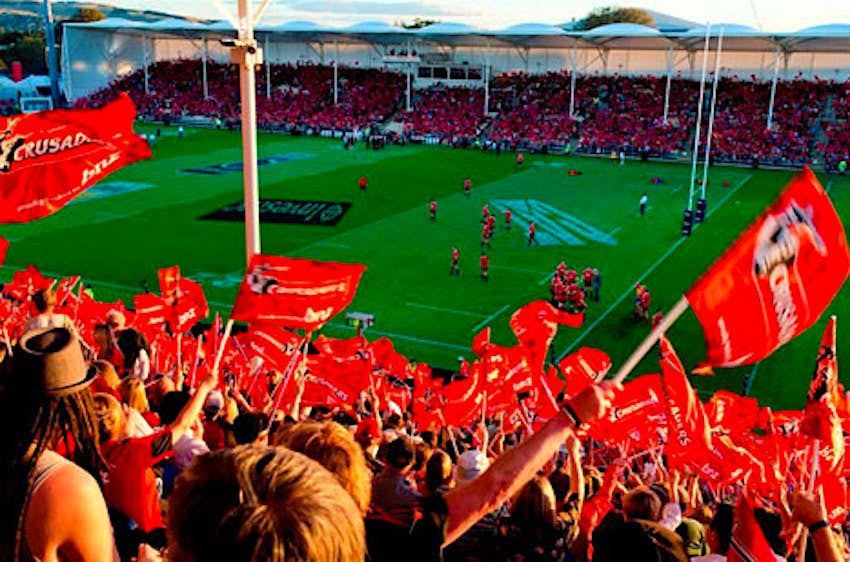 The reasons we’ve included Christchurch in our annual Best in Travel book for 2013 are the same reasons we’ve celebrated the city since our in-depth guidebook research in late 2011. Healthy doses of Kiwi inventiveness, creativity and resilience have created positive and innovative urban solutions – despite the huge ongoing challenge of totally rebooting the city’s central business district. There's a sense of energy in Christchurch that is informing and inspiring the city’s renewal. And visitors to the city that get involved can find themselves infused with that same energy.

The return of old favourites

During our on-the-ground research for the guidebook, we identified the inner-city precincts of Sydenham and Victoria St as the areas to watch for new places to eat. New openings continue to reinforce this prediction, but amid the new places to dine it’s also great to see some old favourites re-open in new post-earthquake locations.

Before the quakes, Indochine and Chinwag Eathai were both standout dining destinations in the city, offering innovative spins on South East Asian food. Now Tony Astle, the owner of both restaurants, is back in business with King of Snake on Victoria St (see their Facebook page here). Look forward to modern Thai cuisine and the resurrection of Indochine’s potent and tasty Asian-inspired cocktails. South of the CBD in Sydenham, Casbah (casbah.co.nz) has reopened in new premises with great Moroccan food, and the excellent Café Lumes has also surfaced again east of the CBD on Fitzgerald Ave (see their Facebook page here). Coffee and cake are definitely worth the short walk to Lumes’ new location. 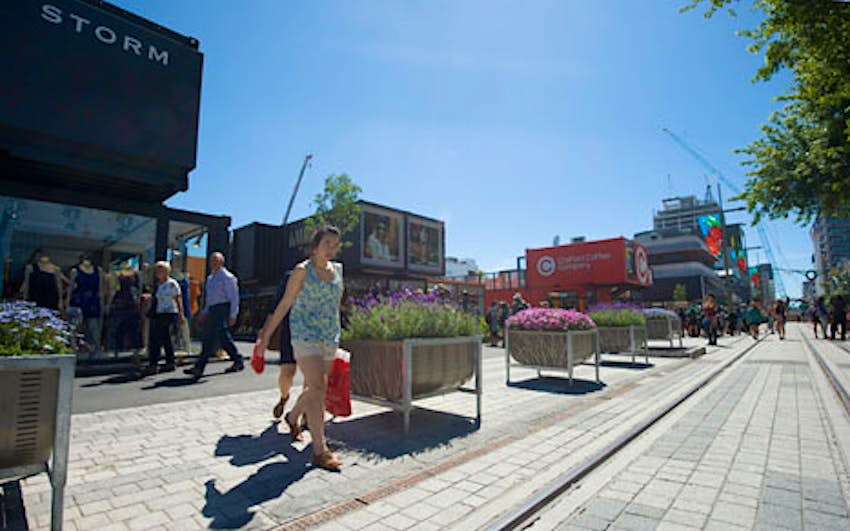 Kiwi craft beer has a been real success story in post-earthquake Christchurch, and joining the excellent Cassels & Sons Brewery (casselsbrewery.co.nz) and Pomeroy’s on Kilmore (www.pomeroysonkilmore.co.nz) is the recent reopening of The Twisted Hop (www.thetwistedhop.co.nz). One of Christchurch’s best brewpubs, The Twisted Hop used to celebrate a location in the city’s heritage Poplar Lane, but has now reopened southeast of the city en route to the seaside suburb of Sumner. Across town, the Four Avenues Brewing Company (find them here) has just started serving their own beers at Pomeroy’s, joining an ever-changing menu of brews from around New Zealand.

Buoyed by the success of The Brewery in nearby Woolston, the Cassels family have also opened the CBD Bar & Pizzeria (cbdbar.co.nz) in Madras St in the central city. Woodfired pizza, tasty craft beers – try the super hoppy One PA Pale Ale – and a front row view of the fences marking the cordoned-off Red Zone. Future plans for the heritage building include a cocktail bar and a music venue. 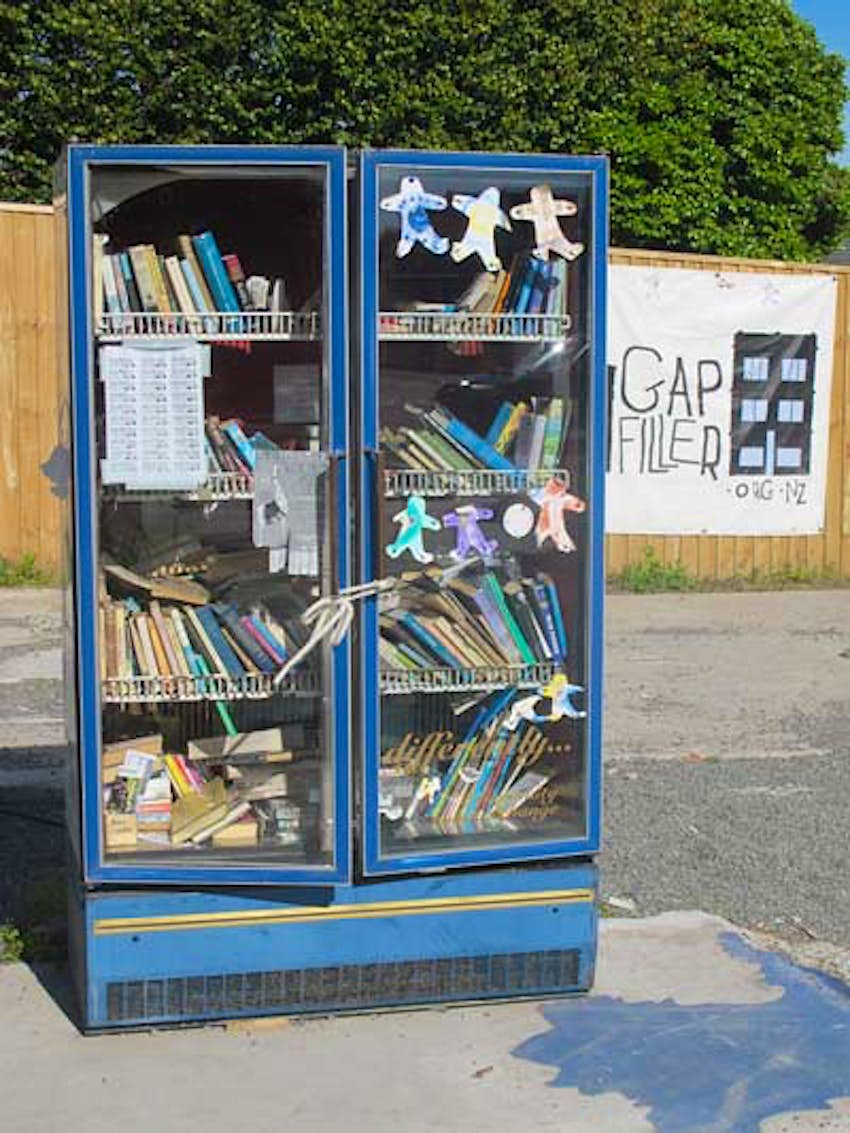 Is it a fridge? Is it a book shelf? The Think Differently Book Exchange is both. Image by Brett Atkinson

More action around the Red Zone

Accommodation remains in high demand in Christchurch, and we continue to recommend booking well in advance. Most central city hostels and hotels closed and shuttered, but one exception is the recently reopened Ibis (www.accorhotels.com) just a short stroll from the colourful shipping containers of the Re:START shopping mall (www.restart.org.nz).

Public access to the nearby Red Zone of central Christchurch remains tightly controlled as ongoing work demolishes quake-damaged buildings, and the only option for travellers is to visit the area on an organised bus tour (www.redbus.co.nz). Tours last around 40 minutes, and it’s a poignant experience driving through a precinct punctuated with crumpled heritage facades and an ever-increasing number of vacant lots, as damaged buildings continue to be systematically demolished. The interesting commentary covers the plans for the rebuild of the city, and the fate of some of Christchurch’s iconic heritage buildings.

Christchurch’s most beloved heritage treasure was the city’s Anglican cathedral, and while a last-minute legal challenge is stalling the demolition of the church, construction has also started on the city’s innovative new 'cardboard cathedral' (cardboardcathedral.org.nz). Foundations were laid in September, and the 700-person structure built from 320 giant cardboard tubes is scheduled to open by February 2013. 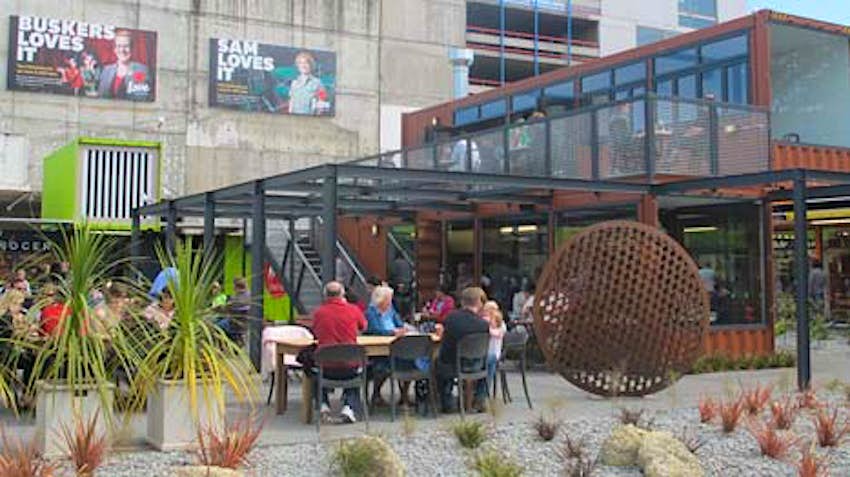 The country comes to town

Christchurch may be re-emerging with art deco craft beer bars, modern Thai restaurants and an innovative cathedral, but at its heart the city still celebrates the rural hinterland of the surrounding Canterbury Plains. Held from 10 to 17 November, New Zealand Cup & Show Week presents the South Island’s biggest horse racing events, and getting dressed up to the nines is de rigueur for attendees (www.nzcupandshow.co.nz). The following week, the Canterbury A & P (Agricultural & Pastoral) Show presents the region’s cutest lambs, sturdiest bulls and lots of family-friendly opportunities for fairground rides and just a little too much candyfloss (cotton candy) (www.theshow.co.nz). Other spring events in Christchurch include British folkies Mumford & Sons on 6 November, and the unlikely pairing of Bear Grylls (Man vs Wild) and Rhys Darby (the hapless Murray from Flight of the Conchords) on 28 November.

Summer beats and making a difference

From early December, Christchurch’s event focus switches to outdoor concerts. The perfect soundtrack to a southern hemisphere summer are laidback Kiwi sounds, and the dub and funk stylings of The Black Seeds and Fly My Pretties will be showcased at A Day on the Green at Canterbury’s Mud House Winery on 1 December (www.mudhousewineryandcafe.co.nz). With a fluid line-up sometimes including members of iconic Kiwi bands like The Phoenix Foundation and Fat Freddy’s Drop, a Fly My Pretties gig is usually a freewheeling musical lucky dip.

For a rockier musical experience, head along to Christchurch’s AMI Stadium on 3rd November for The Concert (www.theconcert.co.nz). Headliners include local musical heavyweights like rapper Scribe and alt-country folkies The Eastern, and the event is designed to make a real difference to reboot Christchurch 2.0. Just sign up to undertake four hours of volunteer work and admission is free to the entire event.

Keeping up to date

See which other cities made our list for 2013 on our Best in Travel page.

The best hikes in Argentina: from ice fields to rainforest trails

The 12 top free things to do in Valencia

6 min read • Published about 21 hours ago