Why you should drive California's scenic Highway 395

US Highway 395 is California’s backbone. Running east of the Sierra Nevada mountain range, it’s also a road of superlatives: highest, lowest, hottest, deepest, oldest – the 395 passes close by a whole host of -ests. And then there are the ghost towns, living towns, ski resorts, tufa formations, film locations and more.

Yet for all its many attractions, it’s relatively unexplored, especially compared to California’s other big name draws. It takes about four days to get a good feel for the region so join us on a north-south, semi-secret, always spectacular road trip.

Get trusted guidance to the world's most amazing experiences delivered to your inbox weekly with our email newsletter. 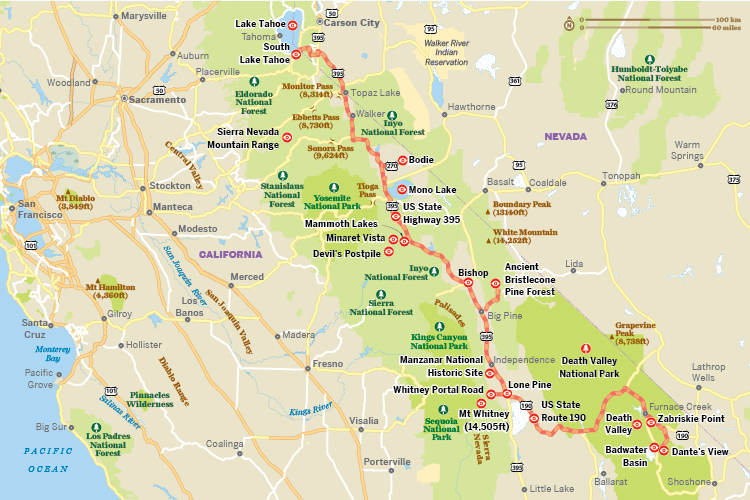 Start your adventure in Tahoe, a year-round destination for outdoor enthusiasts, with skiing in winter and just about every other activity the rest of the year (the east shore’s Flume Trail is a must for mountain bikers). The lake is the calm centerpiece of the action, famous as the largest alpine lake in North America and for its amazingly clear water – thanks to its height (6225ft above sea level) and the water’s depth (1644ft in places) algae can’t grow here, allowing unparalleled underwater views.

Stay and eat: For easy access to the 395 stay in South Lake Tahoe at Basecamp Hotel. Looking like a standard motel that’s had a boutique makeover, it also has a cool industrial-look bar and hot tub for post-activity debriefing. For eating options, book in advance for Cafe Fiore because its superb Italian food is no secret. Or for solid American cooking head to Evans or the Beacon Bar & Grill, both west of town on the way to not-to-be-missed Emerald Bay.

Two hours south of Tahoe, on a side, not fully paved road off the 395, you’ll find Bodie, a mining ghost town with (allegedly) real ghosts. Take a self-guided tour with the map from the small museum, peering into homes eerily still filled with their last owner’s belongings. Or go on a guided tour to gain access to otherwise closed-off buildings.

Just 45 minutes south is Mono (pronounced moh-no) Lake. Head to the South Tufa Area where you can learn more about the weird, tower-like limestone formations known as tufa (created by the action of the lake’s water with the salts in it), the billions of tiny shrimp that call the lake home, and, if you’re here in autumn, the millions of migrating birds who feast on the shrimp and flies.

From Mono Lake it’s a 30-minute drive to Mammoth Lakes, regional hub, famous ski resort and a great place to spend the night.

Stay and eat: Time it right (it’s generally only open in the evenings) and Mono Inn, on the 395 just north of Lee Vining, will give you one of the most memorable meals-with-a-view you’ll have along the whole route. For sleeping, Mammoth Lakes has plenty of decent, alpine-style options including Tamarack Lodge. For an evening of fine food and fun, nowhere in town beats Mammoth Rock ‘n’ Bowl, a bowling alley/arcade downstairs with an excellent, French-influenced restaurant upstairs.

Start your day with a short detour west to Minaret Vista, a stunning panorama taking in a large swath of the Sierra Nevada – imagine the very different reaction that early settlers would have had when faced with this daunting natural barrier. Then drive, hike or bike around Mammoth’s eponymous lakes and check out the curious basalt columns of the Devil’s Postpile.

Back on the 395, it’s only 100 miles to Lone Pine but there’s plenty to see and do on the way. Stop at Bishop for any supplies you might need and make the side trip to Ancient Bristlecone Pine Forest to see trees that are the oldest living things on earth – some have been around for 5000 years.

Just before you reach Lone Pine, be sure to call in at the Manzanar National Historic Site, a Japanese internment camp from WWII. The story told here, of how thousands of Japanese Americans were seen as a security threat and forcibly moved from the coast to live in the harsh desert environment, is an overlooked and controversial episode in the country’s history.

Arriving in Lone Pine it’s tempting (and you should definitely give in to temptation in this instance) to take Whitney Portal Road as it winds up thousands of feet to the trailhead for Mt Whitney itself. The drive goes past the Alabama Hills, a popular film location for dozens of movies and TV shows thanks to its varied landscapes.

The hike up the highest peak in the lower 48 states is straightforward – the path, opened in 1904, had to be easy enough for mules carrying building materials for the Smithsonian Institution shelter at the summit, constructed to observe a transit of Venus – but obtaining the permit for the climb is not quite so simple: there’s a lottery held each year to restrict numbers. Whether you have a permit or not, it’s worth the drive up here for the views on the way, the fresh mountain air, and the chance to eat and pick up souvenirs (and tales of the trail) at the Whitney Portal Store.

Down in Lone Pine, the Museum of Western Film History delves more deeply into the area’s connections with shows like The Lone Ranger and movies such as Django Unchained. The scenery around the town has doubled as everywhere from India to Spain – pick up a locations map from the museum to explore more.

Stay and eat: The Whitney Portal Hostel & Hotel (run by the same people who run the store at the trailhead) is the best place to stay in town, with both dorm beds and motel-style rooms available – ask for one with a view of the mountain. Just along the road is Lone Pine’s best place to eat, Seasons, serving up well-cooked, hearty dishes.

Leaving the Sierra Nevada and the 395 behind, it’s time to hit Death Valley, notorious as the hottest place on earth: 134°F (56.6°C) was recorded here in 1913. It’s also the largest US national park outside Alaska. The lowest point in North America, Badwater Basin, is here too, an area of strikingly white salt flats sitting at 282ft below sea level.

Along with Badwater, it’s worth visiting Zabriskie Point to see the erosion-carved rocks that appear to ripple across the landscape. To cool off, head up to Dante’s View where the rewards are not just lower temperatures (you’re at nearly 5000ft here) but also the chance to end your trip with a view of the contiguous US’ highest point, Mt Whitney, in the distance, and North America’s lowest point, Badwater Basin, below you. Have your camera ready.

Stay and eat: There are three main sleeping and eating areas in the park: Panamint Springs; Stovepipe Wells; and The Oasis at Death Valley. Most accommodation options are of the classier motel variety. For a relaxed setting, the Toll Road Restaurant has filling fare, as does Panamint Springs Resort. Grab a refreshing beer to toast the end of your trip along the highway of superlatives.

Clifton Wilkinson traveled along the 395 with support from Visit California. Lonely Planet contributors do not accept freebies in exchange for positive coverage.

Article first published in October 2015, and last updated in January 2021.

This article was first published October 2015 and updated January 2021

Buy Epic Drives of the World
View all stories