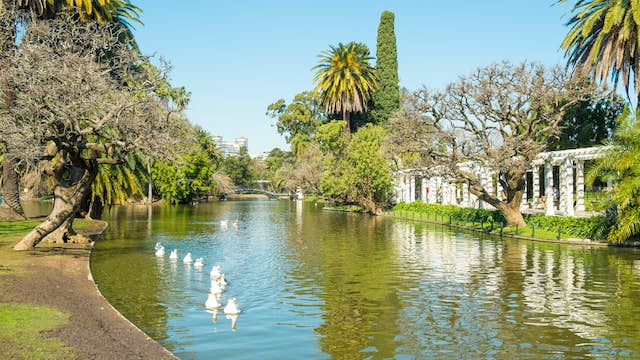 This sweeping park abounds with small lakes and pretty gazebos. Stands rent bikes and in-line skates, and joggers and power walkers circle the ponds – if you don't have the energy to join them, lie back under a tree and people-watch or bing a picnic. There's a monument to literary greats called El Jardín de los Poetas (the Garden of Poets), and the exquisite Rosedal.

Palermo’s green spaces, however, haven’t always been for the masses. The area around Parque 3 de Febrero was originally the private retreat of 19th-century dictator Juan Manuel de Rosas and became public parkland only after his fall from power – on February 3, 1852. The man who overthrew him, former ally Justo José de Urquiza, sits on his mount in a mammoth equestrian monument at the corner of Avs Sarmiento and Figueroa Alcorta.