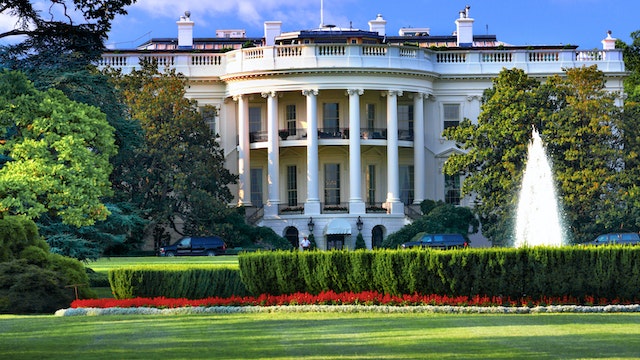 Play image association with the words “Washington, DC,” and chances are the first thing that comes to mind is the White House. The president’s pad is likely to take your breath away the first time you see it, not least because you’re standing in front of a building whose image you’ve seen a thousand times before.

The surrounding streets are equally impressive, with handsome buildings and a bustle that comes courtesy of this neighborhood's role as America's center of bureaucratic and political business (or should that be shenanigans?).

How to visit the White House

Tours are free, but they have to be arranged in advance. Americans must apply via one of their state's members of Congress; non-Americans must ask their country's embassy in Washington, DC, for assistance – in reality, there's only a slim chance that the embassy will be able to help source tickets.

Applications are taken from 21 days to three months in advance; the earlier you request during this time frame the better. Don't take it personally if you don't get accepted. Capacity is limited, and often official events take precedence over public tours. If you do get in, the self-guided walk-through takes about 30 minutes.

Getting inside the White House can be difficult, so the visitor center is your backup plan. Housed in the splendiferous 1932 Patent Search Room of the Department of Commerce Building, it has plenty of artifacts, anecdote-packed information panels and informative multimedia exhibits, including a presentation on the history and lives of the presidential families and an interactive touch-screen tour of the White House.

It’s obviously not the same as seeing the real deal firsthand, but the center does do its job very well, giving good history sprinkled with great anecdotes on presidential spouses, kids, pets and dinner preferences (betcha didn’t know President Garfield liked squirrel soup!). The gift shop is excellent if you're looking for classy souvenirs.

George Washington picked the site for the White House in 1791. Pierre L'Enfant was the initial architect, but he was fired for insubordination. Washington held a national competition to find a new designer. Irish-born architect James Hoban won.

Hoban's idea was to make the building simple and conservative, so as not to seem royal, in keeping with the new country's principles. He modeled the neoclassical-style manor on Leinster House, a mid-18th-century duke's villa in Dublin that still stands and is now used by Ireland's Parliament.

The “President's House” was built (and partially rebuilt) in stages between 1792 and 1829. Legend has it that after the British burned the building in the War of 1812, the house was restored and painted white to cover the smoke marks, and people began to call it the White House.

That's not true – it had been white almost from the get-go – but it makes a nice story. Hoban, incidentally, was hired to supervise the rebuilding. It was a big job, as all that remained were the exterior walls and interior brickwork.

Twenty-sixth president, Theodore Roosevelt is credited with giving the White House its official name in 1901.

How many rooms are in the White House

The White House has 132 rooms and 35 bathrooms. This includes 412 doors, 147 windows, 28 fireplaces, eight staircases and three elevators (for those who are counting).

So the Situation Room – a 5000-sq-ft complex staffed 24/7 to monitor national and world intelligence information – is in the west.

The Cabinet Room is there too, with its huge mahogany table around which the cabinet secretaries sit to discuss business with the president.

The East Wing holds the first lady's office, the social secretary's office, and the Graphics and Calligraphy Office (though tour participants don't see any of these).

The White House has three main levels: the Ground Floor, State Floor and Second Floor. The Ground and State floors have rooms used for official entertaining and ceremonial functions (many of which you see on the tour). The Second Floor holds the private living quarters of the president and family.

Around the White House

By day the streets near the White House hum with the comings and goings of office workers, diplomats, lobbyists, tourists and bureaucrats. You'll need at least a full day to do this part of town justice, and you should aim to explore by foot.

Start outside the White House and then explore the surrounding streets, admiring the architecture, visiting museums like the National Portrait Gallery and The National Museum of African American History and Culture and popping into a government building or two.

Come evening, there’s an exodus of office workers and the streets quiet. You could stay and mingle with DC power brokers over a cocktail in one of the hotel bars, enjoy a meal in one of the fine-dining restaurants, or elbow up to a tavern counter alongside GWU students.

If these options don't tickle your fancy, consider catching a free early show on the Millennium Stage at the Kennedy Center before taking a short riverside stroll into ever-busy Georgetown for dinner.

How to take the best picture of the White House

Want to snap a selfie with a White House backdrop? You have two options. First head to Pennsylvania Ave, past the peace activists who are always there, for photos across the North Lawn. This view shows the triangular north portico and main driveway.

Then walk to E St NW for pictures with a South Lawn background. The view here focuses on the rounded south portico and distant flowery gardens. Alas, there's a security barrier between you and the White House fence, so you won't be getting any unfettered close-ups.

Restaurants near the White House

As you might guess, the area around the White House is high-end eating territory, the pinnacle of the power-lunch and show-off-dinner school of sartorial activity. With all that said, you usually get what you pay for – there’s too much competition around for local chefs to rest lazily on their laurels. A few top-tier places include Equinox, Old Ebbitt Grill and the Bombay Club.

Hotels near the White House