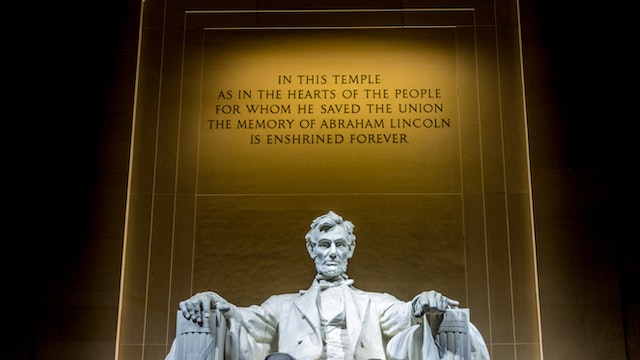 Anchoring the National Mall's west end is the hallowed shrine to Abraham Lincoln, who gazes across the Reflecting Pool beneath his neoclassical, Doric-columned abode. The words of his Gettysburg Address and Second Inaugural speech flank the huge marble statue on the north and south walls.

Be sure to visit the lower-level museum, featuring interesting displays about Lincoln’s life and times, and video history of the many protests that have taken place here.

The memorial's several-year renovation, which expanded the museum and opened up the underground vault which will be open to the public for the first time, is expected to open in 2021.

History of the Lincoln Monument

Plans for a monument to Abraham Lincoln began in 1867 – two years after his assassination – but construction didn’t begin until 1914. Henry Bacon designed the memorial to resemble a Doric temple, with 36 columns to represent the 36 states in Lincoln’s union.

Carvers used 28 blocks of marble to fashion the seated figure. Lincoln’s face and hands are particularly realistic since they are based on castings done when he was president.

The words of his Gettysburg Address and Second Inaugural speech flank the statue on the north and south walls, along with murals depicting his principles. Look for symbolic images of freedom, liberty and unity, among others.

The memorial’s interior is divided into three chambers – north, south and central. A pair of rows each with four columns separate the chambers.

Lincoln Memorial hours and how to get there

The Lincoln Memorial is open 24 hours a day, 365 days of the year. To reach the area by bus, DC Circulator's National Mall route has two stops on 15th St by the memorial. By metro, the orange, silver and blue lines to Smithsonian, then a five- to 10-minute walk.

From the get-go, the Lincoln Memorial became a symbol of the Civil Rights movement. Most famously, Martin Luther King Jr. gave his “I Have a Dream” speech here in 1963. An engraving of King’s words marks the spot where he stood.

It’s on the landing 18 steps from the top, and is usually where everyone is gathered, snapping photos of the awesome view out over the Mall.

Architect Henry Bacon also conceived the iconic Reflecting Pool, modeling it on the canals at Versailles and Fontainebleau. The 0.3-mile-long pond holds 6.75 million gallons of water that circulate in from the nearby Tidal Basin.

Tips for visiting the Lincoln Memorial

Visit the memorial at night. It's well lit and particularly atmospheric once the sun sets (plus there’s less crowd jostling).

For a dramatic view of the Reflecting Pool and Washington Monument, stand on Martin Luther King Jr's step and ready your camera.

Top sights around the Lincoln Memorial

Whatever places you decide to explore, be prepared to walk. The main row of sights, from the Smithsonian museums west to the Lincoln Memorial, is about 2 miles tip to tip. The DC Circulator National Mall bus route stops by many of the hot spots, but you'll still end up hoofing it quite a bit.

Here are a few of the top attractions around the Lincoln Memorial:

Best places to eat around the Lincoln Memorial

Aside from a few notable museum cafes and a scattering of snack vendors and kiosks, the Mall is sorely lacking in eating and drinking choices.

Getting around the Lincoln Memorial

Bicycles are welcome on the Mall, and two-wheeling is a great way to navigate the lengthy expanse. Capital Bikeshare has several stations around the area.

Handy ones are by the Smithsonian Metro, Lincoln Memorial, Maryland and Independence Aves SW (near the National Air and Space Museum) and Jefferson and 14th Sts SW (near the Washington Monument). No companies rent bikes on the Mall proper, though Bike & Roll at L'Enfant Plaza isn't too far away.