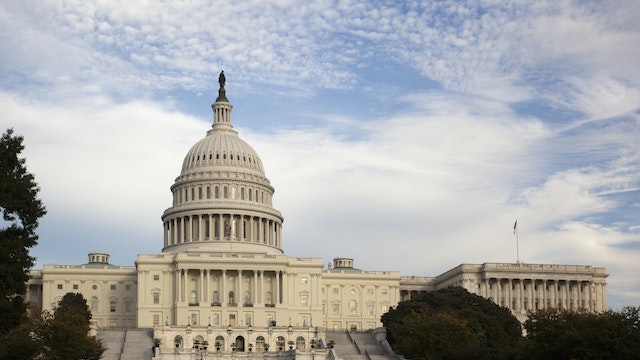 Rising atop Capitol Hill, the US Capitol represents the foundations of American democracy. President George Washington, who laid the cornerstone in 1793, was determined to create a republic in which supreme power was held not by a king but by the people and their representatives. And he did. To this day, within the Capitol’s hallowed walls, 435 elected members of the House of Representatives and 100 senators come together to represent the voices of the United States, debating issues and turning them into law.

Note: Due to COVID-19, Capitol tours are suspended.

When French engineer Pierre Charles L’Enfant designed the new capital city of Washington, DC, in the late 1700s, the most important building, of course, would be the Capitol. And the obvious site was Jenkins’ Hill (renamed Capitol Hill) at the National Mall’s eastern end: “a pedestal waiting for a monument,” L’Enfant declared. None of the 17 entries in a design competition pleased the judges, but when Dr. William Thornton, a Scottish-trained physician, belatedly submitted a neoclassical design comprising three sections – a central structure crowned with a low dome, flanked on either side by rectangular wings – the design immediately was approved. Enslaved people worked on much of the building, including quarrying stone and carving columns.

In 1800, the government moved in. Originally, the building also held the Library of Congress and the Supreme Court, both of which relocated to nearby buildings in 1897 and 1935, respectively. Separate buildings for the House and Senate and the US Botanic Garden are among other structures that since have been added to the Capitol campus.

The Capitol’s democratic symbolism has been challenged. The British burned the building in 1814 during the War of 1812. And, more recently, angry rioters invaded the building in January 2021, threatening to dismantle democracy altogether. Nevertheless, the Capitol continues to stand proud, a grand, historic tribute to the strength of American democracy laid out by the Founding Fathers.

The hourlong tour takes visitors through the Capitol’s most important rooms, including:

Your visit begins at the underground visitor center, where tours convene, visitor info is provided and the Capitol’s history is recounted in Emancipation Hall, a small museum with exhibits about the building (passes not required). There’s also a 500-seat restaurant, along with two gift shops.

The Supreme Court began meeting in these chambers in 1810. Back then, Supreme Court prosecution, which took place twice a year, was a high form of entertainment, and a great way to catch up on the news – hence the large number of spectator chairs. The most famous case argued here was Dred Scott vs. Sandford in 1857, in which the Supreme Court ruled no former enslaved person could claim US citizenship (the bust of Robert Taney, the chief justice who delivered the majority opinion against Scott, was recently removed from the room). The Supreme Court moved to the Old Senate Chamber in 1860 (which often is also part of the tour).

President George Washington and his wife, Martha, were supposed to be laid to rest in this regal crypt, with its 40 Doric brown-stone columns and sandstone arches. But they had other plans (they’re buried at Mount Vernon). Today, the tomb remains empty, and the crypt displays 13 statues representing the 13 original colonies.

Up the stairs, you’ll find the grandiose Rotunda, the heart of the building and the most iconic element. This is where both sides of Congress come to celebrate a new bill or receive an esteemed visitor. Here, too, is where important people lie in state or in honor; to date, only 40 individuals have held this honor, including Abraham Lincoln, Ruth Bader Ginsberg and, most recently, two Capitol police officers killed in the January 6 insurrection.

The fresco inside the dome above, entitled Apotheosis of Washington by Constantino Brumidi, depicts George Washington in the heavens, surrounded by the goddesses Liberty and Victory, and 13 maidens representing the original 13 colonies. Four revolutionary period scenes and four scenes of early exploration decorate the walls. Most of the statues and busts are of presidents, including the one of Abraham Lincoln, sculpted by Vinnie Ream, the first woman artist to receive a federal government commission.

This elegant room just south of the Rotunda, with its ancient-Greek-inspired architecture, was meant to be a House of Representatives chamber, but the acoustics created by the curved ceiling were dreadful. After much debate, the room finally was set aside to honor the most revered citizens of every state with two statues per state. Overcrowding soon became an issue, however. Today, 35 statues are displayed, with the rest showcased in prominent locations throughout the Capitol.

Frederick Law Olmsted, the designer of Central Park, turned wilderness into a rolling parkland surrounding the Capitol. Look for the Summerhouse, with a fountain, hidden grotto and three public drinking fountains.

From the grounds, you have the perfect vantage to admire the beauty of the cast-iron dome, topped by the 19.6-foot-tall bronze statue of Freedom.

Passes are free but required to tour the Capitol building. You can obtain them three ways: 1) Book them online in advance. 2) Contact your senators or representative. Some congressional offices offer staff-led tours of up to 15 constituents. 3) Go to the visitor center for same-day passes, which are in limited supply. All tours start at the underground visitor center beneath East Front plaza.

If you want to visit the Galleries to watch the House or Senate in action, separate passes are required. International visitors should stop by the Appointments Desk at the visitor center.

Check the website for additional details as well as policies concerning etiquette, security and COVID-19 restrictions.

If the white light atop the dome is on at night, the House, Senate, or both are working. It’s called a Convene or Session light.

Visitor center: Beneath the Capitol’s East Front plaza between Constitution and Independence Avenues