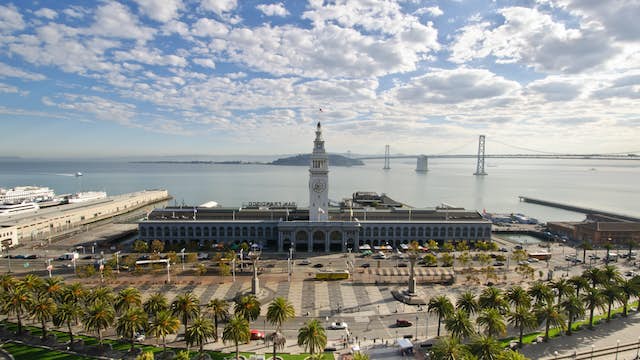 Hedonism is alive and well at this transit hub turned gourmet emporium, where foodies happily miss their ferries over Sonoma oysters and bubbly, SF craft beer and Marin-raised beef burgers, not to mention the locally roasted coffee and just-baked cupcakes.

For thirty years now, the building's new lease on life has hinged on San Francisco's robust food scene. In many ways, it's a back to basics approach that recalls the days when the taverns surrounding the Ferry Building were packed with hungry sailors and commuters looking for cheap, filling lunches. But San Francisco has changed from a blue collar 'berg into a tony tech town, and the modern Ferry Building's offerings reflect that.

Today you'll find vendors hawking artisan mushrooms, honey and chocolate, an outpost of the popular Acme Bread Company (born out of Berkeley's legendary Chez Panisse), and of course one of Oakland's Blue Bottle Coffee Company locations. There's a Japanese deli, a Fort Point brewery tap room, and the beloved Hog Island Oyster Company. One things' for sure – you might not be able to buy lunch for a nickel anymore, but the Ferry Building sure shows off some of the Bay Area's present day prides and joys.

What to do at the Ferry Building

Shop, eat, drink, people watch – if you're short on time in San Francisco, the Ferry Building is one of the best spots to take in as much of the city's flavor as possible before you dash. There's a little something for everyone, from home cooks hoping to scoop up fresh produce to digital epicureans hoping to snap a worthy Instagram of the latest food trend. You can grab a gift for a friend, pick up ferry tickets, or find a new book to peruse over coffee.

Most of the businesses are generally open from 10AM to 7PM, though hours vary by individual merchant. The building itself is open seven days a week from 7AM to 10PM.

The Farmers Market has been one of the Ferry Building's most popular draws since 1992, and is located in the complex's beautiful Victorian arcades. It's certified by the Center for Urban Education about Sustainable Agriculture (CUESA) to assure the sustainability of the Market's offerings, and features nearly 100 farmers and 25 prepared food vendors. The Farmers Market takes place on Tuesdays and Thursdays from 10AM to 2PM and Saturdays from 8AM to 2PM.

Some of the best-regarded restaurants at the Ferry Building include Slanted Door, which blends Vietnamese dishes with a California approach to produce overlooking the waterfront. Boulette's Larder and Boulibar is a bustling joint overlooking the Bay Bridge helmed by a pair of storied female chefs. Imperial Tea Court is an elegant space with over 100 different loose leaf teas to choose from and a menu of fresh dim sum, or heartier hand-stretched noodles. Treat yourself to their afternoon tea special for a very pretty, and tasty, snack.

How to get to the Ferry Building

The easiest – and most aesthetic – way to arrive is on the Line F Market trolley, which stops right out from. But you can reach the Ferry Building any number of ways, including the L-OWL, N-OWL, KBus, Nbus, TBus, and LBus that stop at Steuart Street and Market, the 292, 397, 398, and FCX buses that stop at Embarcadero and Mission.

Street and garage parking abound downtown, including the Pier3 lot ($5 an hour), the Pier 1/2 Motorcycle lot ($.50 an hour). There's valet on weekdays during office hours on the north side curb by Gott's for $15 an hour, with three dollars off if you get a business to validate your parking. There are also a pair of handicapped accessible parking spots on the northbound Embarcadero at the northern and southern ends of the Ferry Building.

Bike racks are located at the front and back of the Ferry Building, and of course downtown San Francisco is very walkable. For the shortest commute, Hotel Vitale is right across the street, while nearby the Harbor Court Hotel nearly matches the Ferry Building's historical pedigree in a converted 1928 YMCA.

True to its name, you can still catch ferries here, too. The San Francisco Bay Ferry offers service to Vallejo, Oakland, and Alameda, while the Golden Gate Ferry offers passage to Larkspur, Sausalito, and Tiburon.

The history of the San Francisco Ferry Building

What is now a largely stationary feast with a farmers market as its crown jewel was once the bustling, beating heart of San Francisco transit. Designed by architect A. Page Brown and completed in 1898, the Ferry Building was a young city's cathedral dedicated to the twin gods of modernity and progress. The largest structure in SF, the Beaux Arts masterpiece was even partly modeled on the Catedral & Giralda in Seville – if the later's bell tower held a modern clock and was routinely wrapped in what San Francisco historian Gary Kimya called "a ghostly mantilla" of fog.

Down on the ground, however, the Ferry Building was a buzzing hive filled with tens of thousands of commuters, travelers, tourists, and longshoreman trying to make their way around the Bay. Here newcomers alighted after long transcontinental rail journeys that dead-ended in Oakland, while dozens of ferries picked up workers headed to Marin and Berkeley, and transferred harried Californians to the city's famous cable cars.

Predating the Golden Gate and Bay Bridges by almost forty years, the Ferry Building was the primary doorway through which some 50 million passengers a year entered and exited the city. As Kimiya points out in Cool Grey City of Love: 49 Views of San Francisco, a the Ferry Building's peak, that was a number second only to the number of bodies moving through Charing Cross station – not bad for a city whose 1930 population was only 8% of London's.

The Ferry Building even survived the 1906 earthquake that leveled so much of San Francisco, its tall clocktower gleaming white over the decimated city. But seventy years after the Ferry Building was built, it was nearly destroyed by a seemingly more innocuous force – the Embarcadero Freeway. The new highway cut the Ferry Building off from Market Street, and its prominence in the daily life of the city dwindled.

After earthquakes and the Embarcadero

Ironically, it was another devastating earthquake that saved the Ferry Building from obsolescence when the 1989 Loma Prieta earthquake took out the Embarcadero. San Francisco elected not to rebuild the freeway, and to re-embrace its waterfront. Yet the city would never again match the number of ferries that traversed the bay nearly a century earlier. It was time to create a new vision of what San Francisco needed from its stately palace of commerce.

Enter the chefs – and the Ferry Plaza Farmers Market, the Book Passage shop, wine merchants, gardening boutiques, and ceramicists. Now that it's a destination in its own right (rather than a place to hurry through en route) you could easily spend a whole afternoon exploring everything the Ferry Building has to offer, or come back again and again.