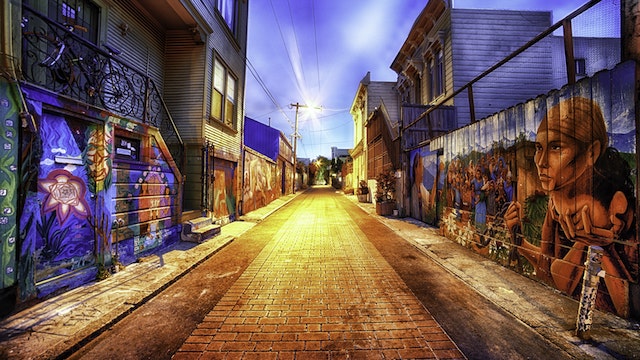 Since at least the 1980s, if you stroll through San Francisco's Mission District you've likely noticed the neighborhood's profusion of colorful murals and street art. From the Aztec serpent-god Quetzalcoatl who occupies 24th & York Mini Park to the "Maestrapeace" that covers the facade of the Women's Building to the tags and other spray painted ephemera that pop up on shops' roll-down doors overnight, the Mission is a living, breathing public art museum. But few corners of the Mission are quite so painted, or celebrated, as Balmy Alley.

This strip off of 24th Street sits parallel to Treat Ave and Harrison Street between 24th & 25th, and for almost fifty years it's been home to works by Chicano artists that build on a long tradition of murialismo, an artistic movement that has roots in pre-Hispanic Central American cultures and which swelled in significance and prevalence after the Mexican revolution both in its countries of origin and in El Norte.

The Balmy Alley murals have a wide range of subject matter, from a memorial for El Salvador activist Archbishop Óscar Romero to a homage to great female artists including Frida Kahlo and Georgia O'Keeffe. Some of the oldest surviving works like "The Primal Sea" at the Garfield Pool at Harrison and 26th Street and artists Miranda Bergman and O'Brien Thiele's "Culture Contains the Seed of Resistance that Blossoms into the Flower of Liberation" have undergone recent restoration, too, giving visitors a chance to see how the Mission's unique take on murialismo has evolved over time.

How to see the Mission District murals

Nonprofit Precita Eyes runs muralist-led tours each weekend that cover 60 to 70 murals within a six- to 10-block radius of Balmy Alley. The organization itself dates back to 1977, when Susan and Luis Cervantes established the muralists association to create accessible public art and provide not-for-profit arts education. Precita Eyes was working in the Mission when Balmy Alley first started filling up with work thanks to art collectives like Mujeres Muralistas and the PLACA project, and have seen (and participated) first-hand how Balmy has evolved in the decades since.

Tours typically cost $20 for adults, $15 for San Francisco residents, $10 for seniors and college students, $6 for teens, and $3 for children under 12.

Edible Excursions offers a food and art tour along 24th Street. The three hour tour highlights the rich culinary scene in The Mission, with a chance to take in the Balmy murals, too. This tour takes place on Saturdays from 11am and costs $125 per person.

The history of the Balmy Alley murals

The 1970s were a turbulent time in San Francisco. A group of Indigenous activists called Indians of All Tribes (IAT) had taken over Alcatraz, student groups were protesting the Vietnam War, the Castro had become the capital of LGBTQIA+ America, and fierce battles were waged downtown over affordable housing in ethnic enclaves like Chinatown as new skyscrapers shot up in the financial district. Marginalized communities were finding their voices like never before, and transforming the city in the process.

Amidst it all, the Chicano movement was swelling, especially in traditionally Latino neighborhoods like the Mission District. Soon, the rising sense of chicanismo would change the face of the barrio itself, filling the Mission with colorful murals that tapped into a long artistic tradition of murialismo, as well as San Francisco's well established yen for political agitation.

San Francisco wasn't new to murialismo. After all, the city had embraced Diego Rivera's 1931 Allegory of California, a fresco at the Stock Exchange Lunch Club that was a gentle reflection of Rivera's anti-capitalist principles. But by the 1970s, the Mission District's emerging school of murialismo would reflect forty years of evolving discourse on Chicano identity, as well as the experiences of a new generation of Central American refugees and immigrants who were trying to rebuild their lives in San Francisco.

In 1970, Chicana artists Patricia Rodriquez and Graciela Carillo met at the San Francisco Art Institute, and by 1974 the two formed Mujeres Muralistas (the women muralists). The project was radical both for the artists' gender and the way they brought domestic and ecological themes into a school of art that was often more overtly political.

It didn't take long before these women's work was galvanized into a movement to transform the political landscape one mural at a time. Artist Ray Patlan started the PLACA project, the name a reference to Spanish slang for graffiti or mark-making. With grant money, PLACA brought together dozens of artists to paint murals protesting United States' Regan-era incursion into Central American politics and the plight of people displaced from Nicaragua, El Salvador, Guatamala, and Honduras.

Many of those murals were centered in and around Balmy Alley as well, firmly establishing that corner of the Mission as the epicenter of a bold new chapter in both murialismo and San Francisco's local art scene. Within a few years, artist René Yañez, who was previously instrumental in the formation of the Mexican-American Liberation Art Front (MALAF), became involved in San Francisco's Neighborhood Arts Program, which helped fund even more murals in the Mission.

Eventually the movement that began in Balmy spread to other corners of the neighborhood , too, and even inspired similar groundswells of more diverse, inclusive, and dynamic murialismo in cities throughout the United States. The work of these groundbreaking artists has been honored and explored in documentaries, books, and fine arts programs hosted by the De Young museum and SFMOMA, and continues to shape one of San Francisco's best-beloved neighborhoods.