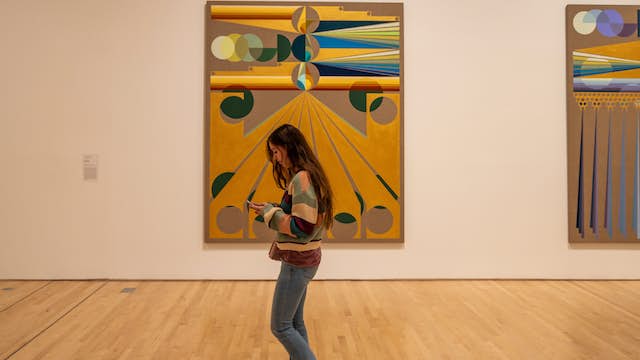 When the San Francisco Museum of Modern Art expanded in 2016, it was a mind-boggling feat that nearly tripled the institution's size to accommodate a sprawling collection of modern and contemporary masterworks over seven floors of galleries – but then, SFMOMA has defied limits ever since its 1935 founding.

A Sorbonne-educated California native, founding museum director Grace McCann Morley was determined to shake up the San Francisco art scene, which she felt was a decade or more behind the times. Morley stood out not only for her avant guard taste, but also as a woman running the first modern art museum on the west coast. Under her leadership, the museum was a visionary early investor in then-emerging art forms including photography, installations, video, performance art, digital art and industrial design. Even during the Depression, SFMOMA envisioned a world of vivid possibilities, starting in San Francisco.

The SFMOMA championed works by artists San Franciscans already had an affinity for, such as Diego Rivera, as well as cutting edge abstract expressionists like Jackson Pollock, Clyfford Still, Mark Rothko, Robert Motherwell and Arshile Gorky who had never previously had a museum show. The museum also expanded the notions of what could be considered fine art, collecting and exhibiting works of photography, film, and architecture, as well as trying new methods of reaching art lovers like the successful Art in Your Life television program that ran in the 1950s.

The collection has outgrown its home twice since, starting with its initial location within the War Memorial Building and again with the Mario Botta designed SoMa location that opened in 1995. Most recently the SFMOMA expanded in 2016, with the new portions of the museum designed by Norway's Snøhetta architectural firm.

If you're wondering where to start exploring the sprawling museum, perhaps the place is SFMOMA's art-filled ground-floor galleries. There are 45,000 square feet of public spaces that are free to visit and full of art, including work's staged in the museum's outdoor grounds. Buy a ticket and you might start to delve deeper on the 3rd floor with SFMOMA’s standout photography collection and special exhibitions. Meditate amid serene paintings in the Agnes Martin room surrounded by 4th-floor abstract art, then get an eyeful of Warhol's Pop Art on the 5th.

Head to the 6th floor for an exhibition of German art after 1960, and then hit the 7th floor for a showcase of cutting-edge contemporary works and intriguing media arts installations. Head downstairs via the atrium to see how SFMOMA began, with colorful local characters admiring equally colorful characters by Diego Rivera, Frida Kahlo and Henri Matisse on the 2nd floor. Start your own collection of original designs and art catalogs at the SFMOMA shop and make a meal of contemporary culinary masterpieces re-created by chef Corey Lee at the museum's Michelin-starred In Situ restaurant.

SFMOMA is open Friday-Monday from 10AM – 5PM and Thursday from 1PM – 8PM. The museum is closed Tuesdays and Wednesdays. Tickets for adults are $25, while seniors over 65 are $22, young adults between 19-24 are $19, and anyone under 18 is free. It can be a good idea to buy a ticket in advance as the museum does have capacity limits. Certain popular exhibitions such as Future Histories, Contemporary Optics, and Nam June Paik have a waiting list. Memberships for individuals are $120 and allow unlimited visits.

Because the SFMOMA is located downtown in the SoMa district, it's easy to access on public transportation. Powell Street and Montgomery Street BART and SF Muni Light Rail stations are close by, as are bus stops at Mission Street, Howard Street, Third Street, and Second Street. A bike rack is available for visitors at the museum’s Howard Street entrance. Parking is available in the museum's own garage on Minna Street, and runs the gamut from $4 for 30 minutes to $35 for a full day.

The museum is designed to be accessible for visitors with mobility limitations and other disabilities. Portable gallery stools and manual wheelchairs can be borrowed from the coat check clerk. Free audio content, including foreign language translations and audio descriptions of artwork for the blind and visually impaired, can be accessed through the SFMOMA's smartphone app. ASL interpreters are also available for guided group tours. The museum has even created a thoughtful Sensory Guide to assist neuro-atypical visitors and those with sensory sensitivities in finding quiet, safe spaces within the SFMOMA galleries and public areas.