in The Marina, Fisherman’s Wharf & the Piers 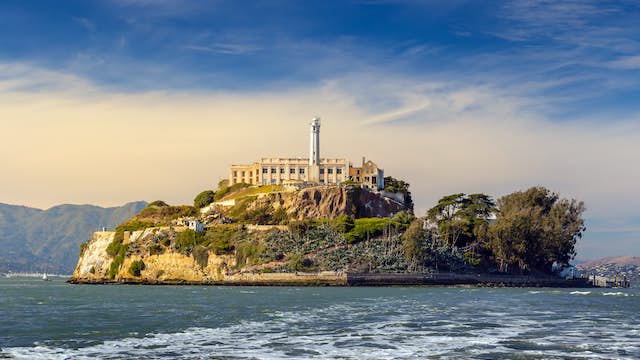 Alcatraz: for over 150 years, the name has given the innocent chills and the guilty cold sweats. Over the decades, it’s been a military prison, a forbidding maximum-security penitentiary and disputed territory between Native American activists and the FBI. No wonder that first step you take onto ‘the Rock’ seems to cue ominous music: dunh-dunh-dunnnnh!

It's also no wonder that Alcatraz garners 1.4 million visitors each year. With easy access from a major city, a thrilling and unexpected history, and stunning views of the San Francisco skyline, The Rock remains one of the most visited national parks in the US system. But for much of Alcatraz's history, this was a place people worked very hard to escape – not spend a pleasant afternoon with their families.

The history of Alcatraz

It all started innocently enough back in 1775, when Spanish lieutenant Juan Manuel de Ayala sailed the San Carlos past the 22-acre island he called Isla de Alcatraces (Isle of the Pelicans). In 1859 a new post on Alcatraz became the first US West Coast fort, and soon proved handy as a holding pen for Civil War deserters, insubordinates and those who had been court-martialed.

Among the prisoners were Native American scouts and ‘unfriendlies,’ including 19 Hopis who refused to send their children to government boarding schools, where speaking Hopi and practicing their religion were punishable by beatings. By 1902 the four cell blocks of wooden cages were rotting, unsanitary and otherwise ill-equipped for the influx of US soldiers convicted of war crimes in the Philippines. The army began building a new concrete military prison in 1909, but upkeep was expensive and the US soon had other things to worry about: WWI, financial ruin and flappers.

When the 18th Amendment to the Constitution declared selling liquor a crime in 1922, rebellious Jazz Agers weren’t prepared to give up their tipple – and gangsters kept the booze coming. Authorities were determined to make a public example of criminal ringleaders, and in 1934 the Federal Bureau of Prisons took over Alcatraz as a prominent showcase for its crime-fighting efforts.

One of the prison's most famous residents was Robert Franklin Stroud, also known as the Birdman for his hobby of studying and caring for birds while in solitary confinement at Leavenworth before being transferred to The Rock. He became famous as portrayed by Burt Lancaster in 1962 film The Birdman of Alcatraz, a fictionalization of the so-called Battle of Alcatraz, a failed 1946 escape plot by convict Bernard Coy and other inmates that turned into a deadly standoff.

Today, first-person accounts of daily life in the Alcatraz lockup are included on the award-winning audio tour provided by Alcatraz Cruises. But take your headphones off for just a moment and notice the sound of carefree city life traveling across the water: this is the torment that made perilous escapes into riptides worth the risk. Though Alcatraz was considered escape-proof, in 1962 the Anglin brothers and Frank Morris floated away on a makeshift raft and were never seen again. Security and upkeep proved prohibitively expensive, and finally the island prison was abandoned to the birds in 1963.

During the next 19 months, several thousand Native Americans and allies would join the occupying group Indians of All Tribes (IOAT) at Alcatraz. They agitated not only for abandoned federal lands to be returned to Indigenous tribes under a clause in the Treaty of Fort Laramie, but also for an end to the assimilatory Indian Termination policies that included abusive boarding schools and strategic erosion of tribal sovereignty.

The Radio Free Alcatraz program, hosted by Santee Sioux John Trudell, used western broadcast networks to share information about the occupation and why Indigenous activists demanded self-determination. Public support for the burgeoning American Indian Movement grew, even garnering attention from celebrities like Jane Fonda and the rock band Creedence Clearwater Revival. Inspired by the work done at Alcatraz, other occupations took place nationwide, including at Wounded Knee, South Dakota. Still, logistical pressures including surveillance by the FBI and access to water, telephone service, and electricity (eventually cut off by the federal government) ultimately stymied the movement on The Rock.

After the government removed the last Indigenous activists and regained control of the island, it was transferred to the jurisdiction of the national park service. By 1973, Alcatraz had already become a major tourist attraction. Today the cell blocks, ‘This Is Indian Land’ water-tower graffiti and rare wildlife are all part of the Alcatraz experience. Each Thanksgiving Day since 1975, an ‘Un-Thanksgiving’ ceremony has been held at dawn on Alcatraz, with Native leaders and supporters continuing to share their determination to reverse the course of colonial history.

Alcatraz is open every day except Christmas, Thanksgiving and New Year's day. Advance tickets are recommended as it's such a popular attraction, particularly during peak season. A ferry cruise is required to reach Alcatraz from Piers 31-33 in downtown San Francisco, and the fee includes both transportation and entry.

Day tours start at $25 for children, $41.00 for adults, and $38.65 for seniors. Family Packs good for 2 adults and 2 children are $119.60. Night tours, Behind The Scenes tours, and combination tours that include passage to Angel Island are also available. For ticket reservation call (415) 981-ROCK or go to www.alcatrazcruises.com.

Interpretive materials are available in braille and American Sign Language for visitors who are visually impaired or deaf and hard of hearing. Assistive listening devices are available for visitors, as well, and there are also strategically placed tactile markers throughout Alcatraz's major sites, and close-captioning on film exhibits. An accessible tram is available to help those with impaired mobility navigate the island upon arrival.