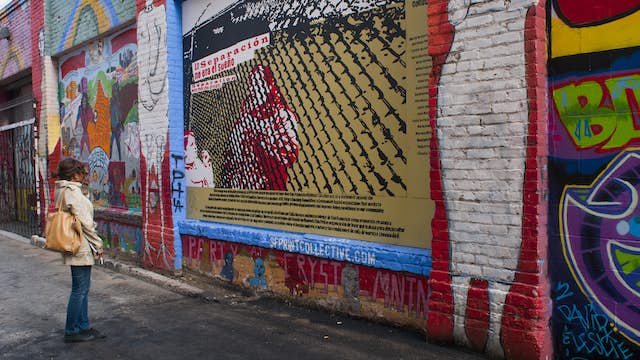 The Mission District has a long history of street art and muralismo – an oft-political school of public art prevalent throughout South and Central America and US cities with a robust Latino community – and Clarion Alley is one colorful place to check out the scene(ry) for yourself.

Clarion Alley, which sits at between Mission Street and Valencia Street for one block between 17th and 18th Street, has been a destination since the early 1990s. That's when the Clarion Alley Mural Project (CAMP) was founded by artists Aaron Noble, Michael O'Connor, Sebastiana Pastor, Rigo 92, Mary Gail Snyder, and Aracely Soriano.

CAMP wanted to pick up what art collectives like Mujeres Muralistas and the PLACA project jumpstarted in nearby Balmy Alley in the 1980s, continuing to explore Chicano identity and the political struggles in Central America during the Reagan years, though also bringing even more local flavor into their work.

CAMP aren't the only artists operating in Clarion Alley. Local creatives routinely update the walls of the structures that back up to the alley, ranging from a former IWW meeting hall and blocks of newly constructed condos. Their work reflects concerns about that kind of gentrification, as well as contemporary political and social justice movements with regular turnover.

Though there was crossover between the two corners of the Mission District that involved influential figures like Precita Eyes co-founder Susan Cervantes, these new artists diverted from the early Balmy Alley style. They took on less of the social realist style influenced by Diego Rivera's 1931 Allegory of California and instead continued to delve into subjects and imagery inspired by comic books, hip hop, and personal observations from around the barrio, truly giving the neighborhood a voice as part of an egalitarian art movement.

Some of the first works in Clarion Alley have survived for decades, however, respected by the artists presently working the walls. Those including paintings by Chuy Campusano (who was mentored in the 9170s by Rivera's assistant Emmy Lou Packard), Scott Williams, and Julie Murray, as well as Megan Wilson's daisy-covered "Tax the Rich" or Jet Martinez' glimpse of Clarion Alley inside a forest spirit.

If you haven't been coming here for years, it can be hard to distinguish what's new and what's a Gen X original – but that's the beauty of Clarion Alley. It's a living text, a library of Mission District experiences, telling this community's story palimpsest.