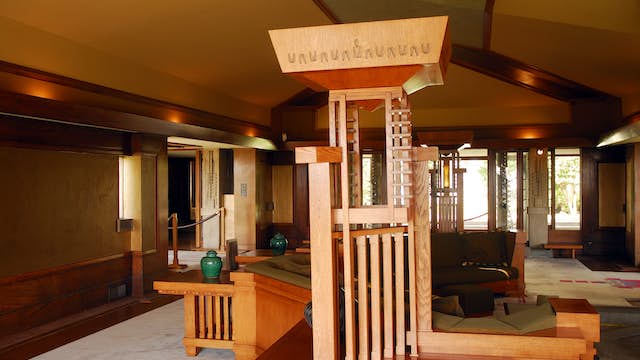 Oil heiress Aline Barnsdall commissioned Frank Lloyd Wright to design this hilltop arts complex and residence in 1919. With its central courtyard, porches and pergolas, the residence is seen as a transitory moment in the architect's style, which evolved into a more open-plan, indoor-outdoor style that would help define modern Southern Californian living. The building's aesthetic evokes Mayan temple architecture – popular at the time – while its abstract imagery of the hollyhock is a nod to Aline’s preferred flower.

Due to Lloyd Wright being based in Tokyo at the time, the project was mostly overseen by the architect's son, Lloyd Wright, followed by Wright’s assistant at the time, Rudolph Schindler. Frequent battles with Lloyd Wright over the project's costs and delays led a frustrated Barnsdall to offer the property to the City of Los Angeles in 1923, a donation accepted by the city four years later.