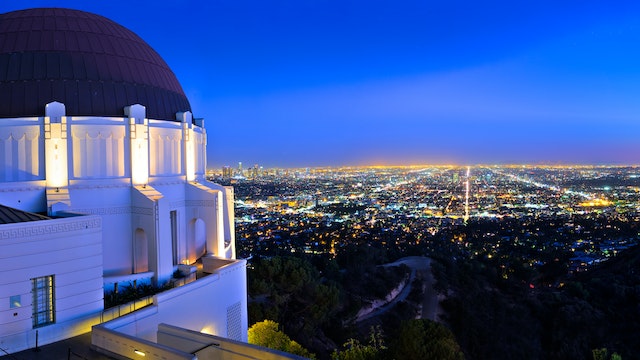 With eyes on both the galaxy above and palm-flanked boulevards below, the Griffith Observatory hovers above LA like a hulking spacecraft. This is one of the city’s true icons, an art deco behemoth flaunted on both the small and silver screen. Yet the place is more than its architectural good looks and epic panoramas, with spectacular planetarium shows, intriguing exhibits and handsome murals.

The 1935 observatory opens a window onto the universe from its perch on the southern slopes of Mt. Hollywood. Its planetarium claims the world's most advanced star projector, while its astronomical touch displays explore some mind-bending topics, from the evolution of the telescope and the ultraviolet and x-ray techniques used to map our solar system to the cosmo itself.

On clear days, the views at the Griffith Observatory take in the entire LA Basin, surrounding mountains and Pacific Ocean. From the building's rooftop viewing platform, you can see the city skyline, the Hollywood Hills and even the city's most famous sign.

Head out on a clear day just before dark, you'll have gorgeous sunset views of the gleaming city below and spectacular star gazing. But if you're only interested in the daytime views, head up on a weekday before noon (when the observatory opens) for easier parking.

Grab a seat in the Planetarium – the aluminum-domed ceiling becomes a massive screen where lasers are projected to offer a tour of the cosmos or show the search for water, and life, beyond Earth. This planetarium is one of the finest in the world. The state-of-the-art Zeiss star projector, digital projection system make for impressively realistic shows. Three are on offer; Centered in the Universe, which takes visitors back to the Big Bang, Water is Life that will have you searching for H2O in the solar system and Light of the Valkyries which explores the phenomenon of the Northern Lights.

All three shows are offered daily, though times vary. Check the website for specific screening times if you're set on seeing a particular show. Note that children under five are only permitted to attend the first showing of the day.

Housed in a recently updated copper dome, the 1935 telescope is in excellent condition. In addition to repairs to the dome, Griffith Observatory also added a new exhibit station in the Hall of the Eye exhibit hall that provides live video and audio feeds from the telescope in order to allow visitors unable to climb the stairs to have an observing experience.

Most nights the telescope serves up to 600 visitors. It is free to the public every night the Observatory is open and the sky is clear. It can be especially busy and festive during major celestial events. An experienced guide will help you look through the eyepiece and there are additional telescopes wheeled onto the lawn most nights.

Both the upper and lower levels house exhibits, delving into some mind-bending topics. If you ever wondered about the mechanics behind eclipses, moon phases, tides, seasons or the sun's fiery antics, this is a good place to get the lowdown. Learn about the evolution of the telescope and the ultraviolet x-rays used to map our solar system. While elsewhere see what happens when light is also broken into its technicolor spectrum courtesy of a sepectroscope. Downstairs, existentialist crises are likely at the interactive Gunther Depths of Space exhibit, whose 'Big Picture' focus includes a massive photo mural of the universe itself.... enough to shrink the biggest of earthly egos.

Tickets to the planetarium are sold in the main lobby, itself a highlight of the observatory. Look up to enjoy Hugo Ballin's striking murals. The eight rectangular murals just below the dome depict the 'Advancement of Science,' from time, geology and biology, mathematics and physics, to astronomy, aeronautics, navigation, civil engineering, and metallurgy and electricity. Upstaging them all is the dome's own mural, its protagonists including an athletic Atlas holding up the world, the four winds, the 12 constellations of the zodiac, and the planets depicted as classical gods. Although the murals were meticulously restored more than 10 years ago, workers left a small patch of the dome untouched (hint: look above the main entrance). Suspended from the dome is Foucault's Pendulum, its 240lb bronze ball demonstrating the Earth's rotation.

What to eat near Griffith Observatory

There is a little cafe at the observatory, but a better option is to follow the signposted 0.6 mile hike down to Fern Dell Dr for freshly baked goods at outdoor, counter service cafe Trails. Almost everything from its tiny timber-cabin kitchen is made from scratch, from the popular egg-salad sandwich to the quiche and chunky apple pie. Order at the counter then devour at one of its picnic benches, under the shade of sycamores, Chinese elms and carob trees.

How to get to Griffith Observatory

You can drive of course, but parking can be challenging, especially on weekends. Consider catching the DASH Observatory shuttle bus from Vermont/Sunset metro station (Red Line) to Griffith Park Observatory. Alternatively, hike up from Los Feliz below which is a great option.