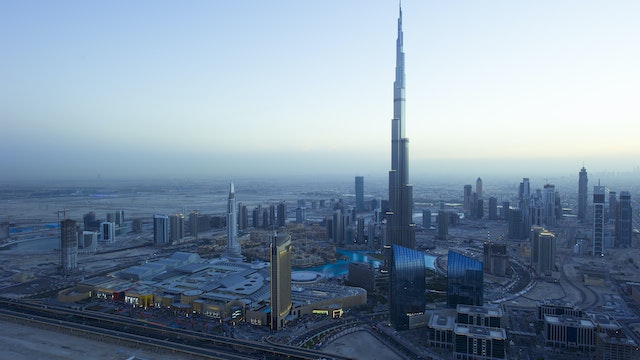 The Burj Khalifa is a stunning feat of architecture and engineering, with two observation decks on the 124th and 148th floors and a restaurant-bar on the 122nd. The world’s tallest building pierces the sky at 2715ft (828m) and opened in January 2010, six years after excavations began. Up to 13,000 workers toiled day and night, putting up a new floor in as little as three days.

How to get tickets to visit the Burj Khalifa

To avoid wait times or expensive fast-track admission, book tickets online as far as 30 days in advance. Timed tickets are available at the ticket counter and often sell out quickly. Book especially early if you want to go up at sunset. Prices go up during prime hours (around sunset), and closing times may vary depending on demand and the season. Budget at least two hours for your visit. For a more in-depth experience, you can rent audio guides for Dhs25 ($6.80).

High humidity often cloaks Dubai in a dense haze, making views less than breathtaking. On hazy days, it’s better to visit at night. No refunds or rain checks are given if the outdoor viewing terrace is closed for bad weather.

At the Top Observation Deck

Taking in the views from the world's tallest building is a deservedly crave-worthy experience and a trip to the "At the Top" observation deck on the 124th floor (1483ft) is the most popular way to do it. Once you get to the platform, you can seek out high-powered "viewfinders" that help bring even distant developments into focus (at least on clear days) and cleverly simulate the same view at night and in the 1980s. There are also six digital telescopes that use HD cameras with a high zoom to zero in on places outside the cityscape. Getting to the deck means passing various multimedia exhibits until a double-decker elevator zips you up at 32ft per second.

At the Top Sky

To truly be on the world's highest observation platform, you need to buy tickets to "At the Top Sky" on the 148th floor (1820ft). A visit here is set up like a hosted VIP experience with refreshments, a guided tour and an interactive screen where you "fly" to different city landmarks by hovering your hands over high-tech sensors. Afterwards, you're escorted to the 125th floor to be showered with Burj trivia and to take in another attraction called "A Falcon's Eye View" that lets you take a virtual flight over the emirate by soaring over key attractions like a bird.

Restaurants and bars at the Burj Khalifa

The food may not be out of this world, but the views are certainly stellar from At.mosphere, the world's highest restaurant, on the 122nd floor (1450ft). Richly decorated in warm mahogany, limestone and thick carpets, the dining room oozes a sophisticated ambience while the compact menu lets quality meats and seafood shine. There's also a lounge one floor up if you just want a drink. Reservations are essential, minimum spends apply, a dress code is in effect and no children under 10 are allowed. To get there, you need to take the elevator from the foyer of the Armani Hotel.

Engineers and the Chicago-based architecture firm Skidmore, Owings & Merrill (SOM) had to pull out all the stops in the construction of the Burj Khalifa. Pouring the 11.5ft-thick foundation alone required 16,350 cubic yards (12,500 cubic meters) of reinforced concrete. The design was inspired by the Hymenocallis desert lily.

The Burj Khalifa is not only the world's tallest building (for now) but also flaunts other records and impressive figures, including the following:

Where to stay near the Burj Khalifa

The Burj Khalifa is located in Downtown Dubai, and the Armani Hotel occupies 15 of the lower floors of the Burj Khalifa. Staying in Downtown Dubai puts you smack dab in the city's vortex of vibrancy. Aside from the big international chains, you'll also find a few home-grown players imbued with a local sense of place. With few exceptions, you'll need to shell out top dirham.

Where to eat near the Burj Khalifa

If you don't want to shell out for a meal in the world's highest restaurant, there are plenty of other options nearby. For fresh organic salads and mains with a view of the Burj and the lake, head to Baker & Spice. Majlis in the Dubai Mall's Souk section serves refreshments made with camel milk, including a creamy camelccino (cappuccino with camel milk).

How to get to the Burj Khalifa