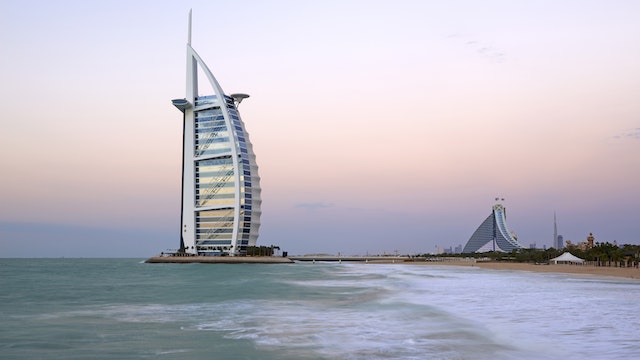 The Burj Al Arab's graceful silhouette – meant to evoke the sail of a dhow (a traditional wooden cargo vessel) – is to Dubai what the Eiffel Tower is to Paris. Completed in 1999, this iconic landmark hotel sits on an artificial island and comes with its own helipad and a fleet of chauffeur-driven Rolls Royce limousines. Beyond the striking lobby, with its gold-leaf opulence and attention-grabbing fountain, lie 202 suites with more trimmings than a Christmas turkey.

The Burj Al Arab is worth visiting if only to gawk at an interior that’s every bit as garish as the exterior is gorgeous. The mood is set in the 590ft-high lobby, which is decorated in a red, blue and green color scheme and accented with pillars draped in gold leaf. The lobby atrium is tall enough to fit the Statue of Liberty within it.

If you’re not checking into the Burj Al Arab, you need to make a reservation for cocktails, afternoon tea or a meal to get past lobby security. A minimum spend applies; check the Burj's website for details.

Architecture of the Burj Al Arab

The Burj Al Arab has 60 floors spread over 1053ft (321m) and was the world's tallest hotel at the time of its opening. British architect Tom Wright came up with the iconic design and signature translucent fiberglass facade that serves as a shield from the desert sun during the day and as a screen for the impressive illumination at night.

The Burj Al Arab's interior by British-Chinese designer Khuan Chew is every bit as over-the-top as the exterior is simple and elegant. The moment you step into the lofty lobby, a crescendo of gold-leaf, crystal chandeliers, hand-knotted carpets, water elements, pillars and other design elements put you into sensory overload. Some of the 258,333 sq feet (24,000 sq meters) of marble hail from the same quarry where Michelangelo got his material.

The white metal crosspieces at the top of the Burj Al Arab form what is said to be the largest cross in the Middle East – but it’s only visible from the sea. By the time this unexpected feature was discovered, it was too late to redesign the tower – the hotel had already put Dubai on the map and become the icon for the city. See the cross on a boat charter and decide for yourself. The scale is amazing.

The cobalt-blue and emerald-green color scheme may not exactly project class and exclusivity, but all is forgotten when enjoying the dreamy views of the Gulf and Dubai skyline from the Skyview Bar. A cocktail or afternoon tea in this capsule-shaped lounge sticking out from the main building on the 27th floor is high on the to-do list of many Dubai visitors despite the steep minimum spends. Reservations are essential.

If you've got a hankering for unusual cocktails, book a perch in gold-leaf-drenched Gold on 27, on the same floor as Skyview. Drinks are inspired by Dubai's past, present and future and include many nonalcoholic choices. A Ghaf, A Goat and A Camel, for instance, is not the beginning of a joke but a delicious potion blending Cascara milk, bourbon vanilla, white peach nectar and sweet goat-cheese meringue. Book ahead.

Beaches near the Burj Al Arab

For the quintessential Instagrammable photo of you and the Burj Al Arab, take a stroll on nearby Jumeirah Public Beach as the sun dips into the Gulf and then upload the picture via one of the Smart Palms that provide free waterfront wi-fi. This wide, clean band of sand is actually an attractive place to spread your towel any time of day. In fact, now there's even a floodlit section for nighttime swimming. When the surf's up, it's fun to watch the boarders, although waves are only small to medium.

Where to stay near the Burj Al Arab

The Burj Al Arab regularly hosts pop stars, royalty, billionaires and the merely moneyed. The lobby with its eye-catching waterfall and opulent decor is the overture to the 202 richly decorated suites. The North Deck adds two huge pools and 400 sunloungers. Suites are bi-level, and even the smallest measure 1829 sq ft (170 sq meters) and come with a personal butler. The decor is lush, with moiré silk walls, mirrored ceilings over the beds, curlicue high-backed velvet chairs and inlaid bathroom tiles displaying scenes of Venice. And all that gold? Yes, it’s the real 24-karat thing.

For less luxurious options, the cluster of midrange hotels and hotel-apartments next to the Mall of Emirates offer great value for money.

Where to eat near the Burj Al Arab

For a surreal dining experience at the Burj Al Arab, book a table at Al Mahara to nosh on fish and seafood while seated before a giant, round aquarium. An elevator posing as a submarine drops you into a gold-leaf-clad tunnel spilling into one of Dubai's most extravagant restaurants. Tables orbit a circular floor-to-ceiling aquarium where clownfish flit and baby sharks dart as their turbot and monkfish cousins are being devoured. Only the finest seafood imported from the UK – and prepared with deft simplicity – makes it onto plates here. A dress code is enforced, and no children under 12 for dinner.

For spots with a view of the Burj Al Arab, head to the bars in Madinat Jumeirah, such as Folly by Nick & Scott, for romantic views of the tower.

How to get to the Burj Al Arab

The nearest Dubai Metro station is Mall of the Emirates, but a taxi or bus ride is required from there. Buses 8, 81 and 88 pass by the Burj Al Arab.