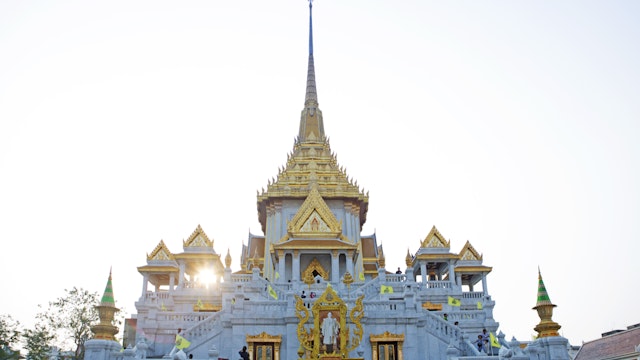 The attraction at Wat Traimit is undoubtedly the impressive 3m-tall, 5.5-tonne, solid-gold Buddha image, which gleams like, well, gold. Sculpted in the graceful Sukhothai style, the image was 'discovered' some 65 years ago beneath a stucco/plaster exterior, when it fell from a crane while being moved within the temple compound. It's speculated that the covering was added to protect it from marauding Burmese invaders, during a siege either in the late Sukhothai period or the Ayuthaya period.

The temple itself is said to date from the early 13th century. Donations and a constant flow of tourists have proven profitable, and the statue is now housed in an imposing four-storey marble structure called Phra Maha Mandop. The 2nd floor of the building is home to the Yaowarat Chinatown Heritage Center, a small but engaging museum with multimedia exhibits on the history of Bangkok's Chinatown and its residents, while the 3rd floor is home to the Phra Buddha Maha Suwanna Patimakorn Exhibition, which has exhibits on how the statue was made.