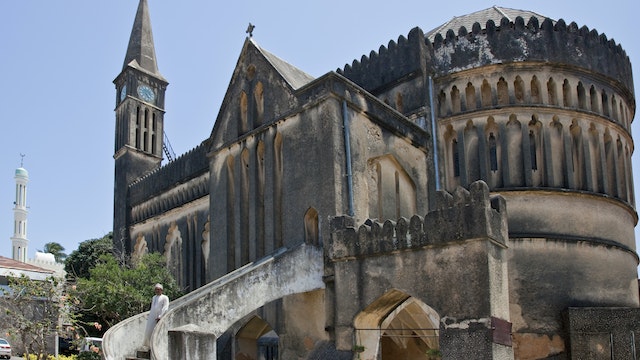 The tall spire and grey-yellow walls of the Anglican cathedral dominate the surrounding streets in this part of Stone Town, while the dark-wood pews and stained-glass windows will remind British visitors of churches back home. This was the first Anglican cathedral in East Africa, constructed in the 1870s by the Universities Mission to Central Africa (UMCA) on the site of the former slave market after slavery was officially abolished.

Inside the cathedral, the altar reputedly marks the spot of the whipping tree where slaves were lashed with a stinging branch. It’s a moving sight, remembered by a white marble circle surrounded by red to symbolise the blood of the slaves.

The driving force behind the construction of the cathedral was Bishop Edward Steere (1828–82), but the inspiration was David Livingstone, whose call to compassion the missionaries answered in 1864 when they settled on the island. One of the stained-glass windows is dedicated to his memory, while the cathedral's crucifix is made from the tree that grew where his heart was buried in the village of Chitambo in Zambia.

In the grounds outside the cathedral is the moving Slave Memorial, depicting five slaves standing in a pit below ground level. The poignant figures emerge from the rough-hewn rock and thus appear hopelessly trapped, shoulders slumped in despair. Around their necks they wear metal collars from which a chain binds them. Although nothing remains of the slave market today, the memorial is a sobering reminder of the not-so-distant past.

At the entrance to the cathedral compound is the East Africa Slave Trade Exhibit, a series of displays and informative panels. Also here are the former slave chambers where slaves were imprisoned before sale. In the same building is St Monica's Lodge.

Services are held at the cathedral on Sunday mornings in English and Swahili. Times are posted on a notice in the porch.

The entrance to the cathedral compound is from New Mkunazini Rd. The entry fee gets you into the slave trade exhibit and the slave chambers as well as the cathedral and grounds.