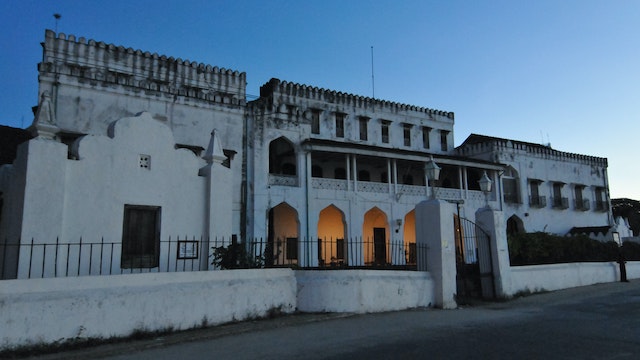 Occupying several large buildings along the waterfront, this was the palace of Sultan Seyyid Said from 1828 until it was largely destroyed by the British bombardment of 1896. It was then rebuilt and used until the 1964 revolution when the last sultan was overthrown. Remarkably, much of the royal paraphernalia – banqueting tables, portraits, thrones and water closets – survives to now provide the human-interest story in this museum dedicated to the sultanate in the 19th century.

In its day the palace and adjacent harem, Beit el-Hukm, and some other nearby buildings, were a self-contained unit with raised walkways allowing royal personages to avoid city streets. One of these walkways can still be seen crossing above the street behind the Palace Museum.

Insights into the life of the palace can be gleaned from Princess Salme’s fascinating book Memoirs of an Arabian Princess from Zanzibar (originally published in 1886, reprinted more recently), which you can buy in the museum and local bookshops, and from a visit to the separate Princess Salme Museum. Getting to know the key players, such as Salme and her brothers Barghash and Majid, helps bring to life the now dusty displays.

Outside the museum, you can still see the tombs of various sultans, including Barghash and Majid. Look out for the curious 'double tomb' – apparently this sultan's legs were amputated and buried first, to be joined by the rest of his body when the sultan died some years later.