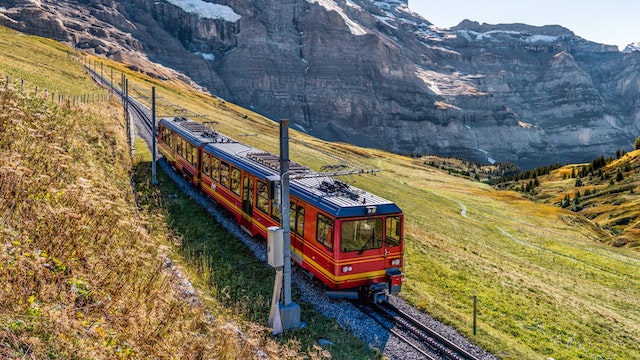 This is the big one. At 3454m above sea level, Jungfraujoch is Europe’s highest train station: a once-in-a-lifetime trip, with views of the deeply crevassed Aletsch Glacier and a never-ending ripple of sky-high Alpine peaks to make you gasp out loud.

A little underwhelmingly for train enthusiasts, the station itself is actually located inside the mountain, in a tunnel of sorts. But (but!) the ride to reach it passes some magnificent mountain scenery, with passengers glued to the window as the tracks curl past spruce forests and eyrie-like villages, meadows sprinkled with a confetti of wildflowers, and mountains that glow pearl white in winter like a scene from a snowglobe. The higher you go, the more dramatic the journey gets, shouldering up to glinting glaciers and the legendary triple act of Eiger (3970m), Mönch (4107m) and Jungfrau (4158m). Upon completing the journey, passengers disembark to explore the snowy surrounds.

We won’t lie – Jungfraujoch is no secret and it gets swamped in high season, but with some cunning planning you can give the madding crowds the slip. Stay overnight at the Mönchsjochhütte, stomp through fresh powder snow in quiet exhilaration, or take the first train to see sunrise pinken the peaks one by one, and you too will feel the magic.

Only the Swiss had the guts more than a century ago to think you could blaze right through rock and ice and bore through the heart of Eiger to a glaciated peak 3454m high. A masterpiece of engineering in the truest sense, the railway has known few rivals since it launched on 1 August 1912, taking some 3000 workers 16 years to complete.

If the journey seems audacious now, just think of how it seemed back then. Many railway pioneers had flocked to the region and proposed ways to connect the highest peaks. But it was Adolf Guyer-Zeller who came up with the masterplan for the electrically operated cog railway, factoring in several stops en route to let passengers enjoy the views.

The work on the railway began in earnest in 1896 and was carried out without machinery – just shovels, pickaxes and a hell of a lot of hard graft. The construction was not without its hitches, among them the sudden death of Adolf Guyer-Zeller in 1899, and the accidental explosion of 30 tons of dynamite in 1908. But these setbacks didn’t stop Adolf’s dream from becoming a reality.

What to do at Jungfraujoch

The icy wilderness of swirling glaciers and 4000m peaks that unfolds up top is beautiful beyond belief. Sidling up to the crag-perching Sphinx, one of the world’s highest astronomical observatories, Jungfraujoch’s observation deck commands grandstand views of the moraine-streaked, 23km-long tongue of the Aletsch Glacier, the longest glacier in the Alps and a Unesco World Heritage Site. The views across a sea of shimmering white peaks stretch as far as the Black Forest in Germany on cloudless days.

Even when there’s dazzling sunshine at lower elevations, there is guaranteed snow up at Jungfraujoch. The Snow Fun Park ramps up the adventure. Here you can whizz across the frozen plateau on a flying fox (zip line), dash downhill on a sled or snow tube, or pound the powder with some gentle skiing or boarding (day passes available).

Tunnels of ice polished as smooth as cut glass lead through the Ice Palace at Jungfraujoch, which offers a frosty reception at -3°C. Mountain guides wielding saws and pick-axes carved the chambers out of solid ice in the 1930s. Now they are adorned with frozen sculptures of bears, ibexes and eagles.

Jungfraujoch commands a phenomenal view of the largest glacier in the Alps: the 23km Aletsch Glacier, which blazes a trail through peaks hovering around the 4000m mark. The glacier is the showpiece of the Swiss Alps Jungfrau-Aletsch Unesco World Heritage Site. From late June to early October, Grindelwald Sports offers two-day hikes across the glacier, led by experienced mountain guides.

Going early, going late or going out of season is the trick to avoiding the crush at Jungfraujoch. It’s well worth getting one of the first or last trains to see the peak when it’s a shade more peaceful. Staying the night at Mönchsjochhütte lets you experience Jungfraujoch when the crowds have subsided. Good weather is essential for the journey; check the website for current conditions. Don’t forget to take warm clothing, sunglasses and sunscreen, as there’s snow and glare up here all year.

The journey to Jungfraujoch

The recent arrival of the tri-cable Eiger Express gondola, linking Grindelwald to Eiger Glacier station in 15 minutes, has seriously slashed journey times to Europe’s highest station. The gondola swings so close to Eiger’s ferocious north face that it feels as though you’ll slam into it.

Trains from Interlaken Ost follow two different routes to Jungfraujoch: one via Lauterbrunnen, Wengen and Kleine Scheidegg (2¼ hours), the other via Grindelwald with the Eiger Express (1½ hours). From late May to October, the first train from Interlaken to Jungfraujoch departs at 6.35am, and the latest train leaving Jungfrau is 5.47pm. Seats can be reserved for a nominal extra charge.

Where to stay & eat

The crowds fade and the mountains rear up around you in all their frozen wonder when you hike through the snow to Mönchsjochhütte, 2.2km east of Jungfraujoch (around 45 minutes on foot). Perched at a giddy 3650m above sea level and open from mid-March to mid-October, this is Switzerland’s highest serviced mountain hut and a firm favourite among hardcore rock climbers, glacier hikers and ski tourers, not to mention mere mortals just up here for the view.

The deal is simple: you’ll sleep in a basic dorm, wash in meltwater and eat hearty mountain meals. The clatter of karabiners (climbing hooks) can be heard at ungodly hours (light sleepers will want earplugs) and breakfast is served from 2am to 7.30am, which is just as well because you really wouldn’t want to miss this sunrise…

Get yourself a Jungfrau Travel Pass for speedy access to the mountains via a brilliant network of trains, funiculars and cable cars. Available for three to eight days, the pass offers unlimited travel on mountain railways in the region, plus discounts on tickets to Jungfraujoch. From mid-April to late November, the three- to eight-day Top of Europe Pass covers the whole shebang: unlimited transport within the region and as many journeys as you like to Jungfraujoch and back. Kids pay just a fraction of the adult price.