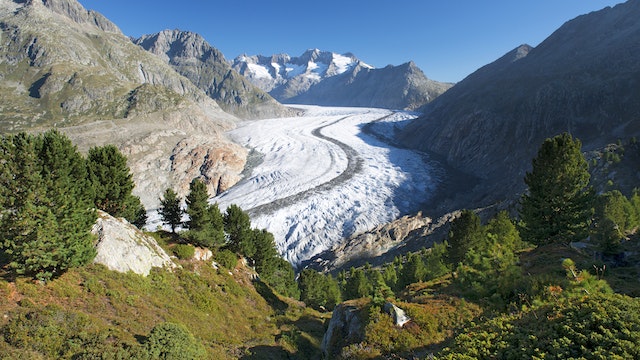 If ever a view in Switzerland is going to leave you dumbstruck (and there are a few great ones to choose from!), it will surely be the infinite swoop of the Aletsch Glacier, the largest ice stream in the Alps. On cloudless days, great razor-like peaks poke 4000m above it, piercing into the bright blue sky. See it from a certain angle and the holy trinity of the Bernese Alps, Eiger, Mönch and Jungfrau, sneak into the picture. It's a shudderingly beautiful sight that will burn into the hard-drive of your memory like no other.

Located in the canton of Valais, in the country’s south, the moraine-streaked, deeply crevassed 23km-long superhighway of ice powers through some of the highest mountains in the Swiss Alps. Elsewhere, such terrain would be off-bounds or accessible only to hardcore mountaineers. But, this being Switzerland, nature is harnessed in the most delightful and sustainable way, and you can hike right alongside it, accompanied by the occasional flock of inquisitive blacknose sheep.

Geology of the Aletsch Glacier

The Aletsch Glacier is the icing on the Unesco World Heritage cake of the Swiss Alps Jungfrau-Aletsch region. Roughly 23km long and with a volume of 15.4 km3, the glacier is the largest glacier in the European Alps, carrying 11 billion tons of ice from the northern slopes of Eiger, Mönch and Jungfrau down to the Valais. The glacier has two medial moraines – the dark lines running the length of the glacier showing where two glaciers have merged.

At the end of the last Ice Age, 11,000 years ago, the glacier extended down into the Rhône Valley. In 1860, the glacier was 3km longer than it is today and its edges were about 200m higher. Like many glaciers that have succumbed to a similar fate because of climate change, the Aletsch glacier is sadly retreating, shrinking by about 50m in length each year and dropping significantly at its edges. If it continues to retreat at this rate, predictions suggest that it will have lost half of its volume by 2100.

​​Views of the Aletsch Glacier

Most get their first riveting glimpse of the glacier from its head at Jungfraujoch in the Bernese Oberland, where the view of the swirling ice is dramatically framed by perennially snow-capped Eiger, Mönch and Jungfrau. Impressive? Without doubt. But it gets better.

For ringside views of the glacier you need to get up close to the ice on the hiking trail (see below) that shadows its frozen expanse. Excellent vantage points include Eggishorn (2927m), Bettmerhorn (2647m) and Moosfluh (2333m) in Valais, which are connected by cable cars and lifts climbing from Fiesch, Bettmeralp and Riederalp.

Hiking at the Aletsch Glacier

The pull of the Aletsch Glacier is never stronger than when you are striding alongside its ice-blue majesty, breathing in the pure Alpine air and gazing up in wonder at the four-thousanders that thrust above it. To name one ‘must-do’ trek in a region of epic walks is tough, but our money goes on the 17km, five- to six-hour, moderately challenging day hike from Fiescheralp to Bettmeralp.

The trail initially heads north towards Eggishorn, with the sound of cowbells accompanying the grandstand views of the Aletsch Arena peaks, the more distant (yet ever distinctive) pyramid of the Matterhorn and, further away still and over the border in France, Mont Blanc etched on the horizon.

The viewpoint overlooking the Fieschergletscher is the prelude to the big one. Snaking down from the eastern flank of Grosses Fiescherhorn, a razor-edge peak at 4049m, this 16km swirl of eternal ice is the second biggest glacier in the Alps.

From here, the route winds around slopes above the Fieschertal and up through a rock-strewn gully, gradually steepening as it negotiates switchbacks up to a rock erected on a wooden platform. The trail then heads westwards to the remote valley of Märjela, its mountain hut, and the Märjelensee, a milky turquoise splash of a lake buttressed by immense mountains and the rim of the Aletsch Glacier. Horn-shaped peaks glower down, among them the 4193m dagger of the Aletschhorn.

The Aletsch Glacier is now your constant companion as the path skirts the deeply crevassed ice. Avoid the peak summer season and fellow hikers are few, but you might sight chamois, ibex and marmots with luck and clever timing, and almost certainly the shaggy-haired blacknose sheep that are totally at ease in this wilderness of rock and ice.

A pretty sweep of Swiss stone pine forest and glittering tarns soften the Alpine picture as you continue along a ridge and on to the grassy slopes of Moosfluh, where a strategically placed bench offers staggering glacier views. Soon after you’ll reach the glass-blue lake of Blausee, where the mountains pause to admire their reflection. From here it is just a stone’s throw back to Bettmeralp.

With dark-timber chalets totally dwarfed by the colossal mountain backdrop, the hamlets that snuggle up to the glacier, Bettmeralp, Riederalp and Fiescheralp, have plenty of enticing self-catering and B&B options for an overnight stay.

But if you want to get closer to the icy wilderness, nothing beats bedding down at Gletscherstube Märjelensee, a mountain hut open from mid-July to September that’s located right on the hiking trail that rims the glacier. Peering out across the turquoise lake at Märjelenalp, this privately run lodge is warm, woody and reached on foot in around an hour-and-a-half from the cable car station at Fiescheralp. The pine-clad dorms are quiet, families are welcome and simple mountain grub (Rösti and the like) features on the menu. Should you wish to get closer to nature and the stars, book the outdoor bed fashioned from a wooden crate.