The vivid, 3m-long Viking Age rock carving Sigurdsristningen illustrates the story of Sigurd the Dragon Slayer, a hero whose adventures are described in Beowulf and the Icelandic sagas. The story inspired Wagner’s Ring Cycle, and The Hobbit and The Lord of the Rings also borrow from it. A walking path along the river starts from the parking lot. The carving is situated near Sundbyholms Slott and Mälaren lake, 12km northeast of Eskilstuna.

Carved into the bedrock around AD 1000, the carving shows Sigurd roasting the heart of the dragon Fafnir over a fire. Sigurd’s stepfather Regin persuaded him to kill Fafnir for the dragon’s golden treasure. Sigurd touches the heart to see if it’s cooked, then sucks his finger, and voila – he tastes the dragon’s blood and suddenly understands the language of birds. They warn him that Regin is plotting to kill him and keep the treasure, so Sigurd attacks first, chopping off his stepfather’s head; the unfortunate fellow is shown in the left corner of the carving, among his scattered tools. Also depicted is Sigurd’s horse Grani, a gift from Odin, tied to the tree where the birds perch. Runes in the dragon’s body, unrelated to the legend, explain that a woman named Sigrid built a nearby bridge (the abutments can still be seen) in memory of her husband Holmger. 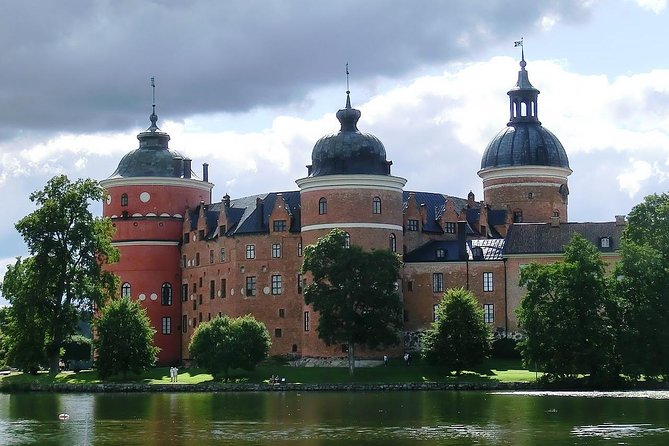