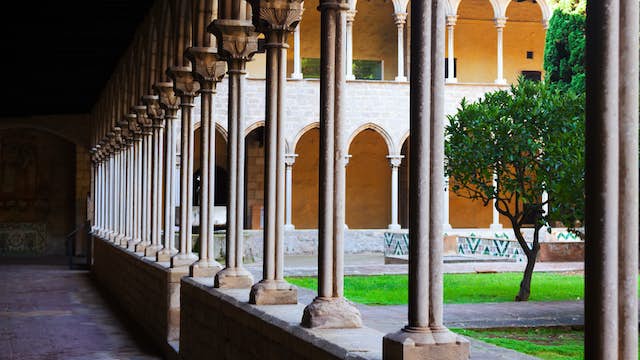 Founded in 1327, this serene convent is now a museum of monastic life (the few remaining nuns have moved into more modern neighbouring buildings). It stands in a residential area that was countryside until the 20th century, and which remains a divinely quiet corner of Barcelona. The convent's architectural highlight is the large, elegant, three-storey cloister, a jewel of Catalan Gothic, built in the early 14th century. The sober church is another excellent example of Catalan Gothic.

Following its course to the right, stop at the first chapel, the Capella de Sant Miquel. Ferrer Bassá, one of Catalonia’s earliest documented painters, created its (now restored) murals in 1346. Nearby is the ornamental 14th-century grave of Queen Elisenda, who founded the convent. Unusually, it's divided in two: the cloister side shows her dressed as a penitent widow, while the other part, an alabaster masterpiece inside the adjacent church, depicts her dressed as queen.

Strolling around the ground floor of the cloister, peek into the restored refectory, kitchen, stables, stores and a reconstruction of the infirmary, as well as the tiled cistern. All give a good idea of convent life. Eating in the refectory must have been dull, going by the exhortations of Silentium (Silence) and Audi Tacens (Listen and Keep Quiet) written around the walls. Harder still must have been spending one’s days in the cells on the ground and 1st floors in a state of near-perpetual prayer and devotional reading.

Upstairs is a grand hall that housed the dormidor (sleeping quarters); its small night cells have long since been removed. Today a modest collection of the monastery’s art, especially Gothic devotional works, graces this space. Most is by largely unknown Catalan artists, with some 16th-century Flemish works, and was acquired thanks to the considerable wealth of the convent’s mostly upper-class nuns.